Make sure you are checking the #100Bands100Days hashtag on Twitter on a daily basis to stay on top of all the bands featured and be sure to follow Verity and NW_Music_Scene there. Some days the featured act could be an established and locally-adored northwest-based musician and other times they could be a band with a small following that just hasn’t had their deserved time in the spotlight yet. Either way, we’re fairly confident you can come away from this daily segment with plenty of new favorites. Today’s featured artist is Big Wheel Stunt Show.

Today’s featured band is one we’ve live seen more times than we can count and are among our favorites around here. The NorthWest Music Scene got its start on Facebook nearly nine years ago now and a few years before we had an actual website. When we started the Facebook page we teamed up with KGRG to do a weekly feature called NorthWest Music Scene’s Top 5 at 5 that ran every Friday for several months. One of the bands that consistently made it onto the airwaves in those early days was a little Grit City outfit trio called Big Wheel Stunt Show. They quickly became a favorite of ours as they began carving their way through the local scene. Gig after gig, wherever they could find their way onto a stage… they began finding a home amongst varied groups of northwest artists and music aficionados….Who were these guys? Who are these guys?

With addition of guitar wizard Fred Speakman, they are now four gentlemen (okay, that may be pushing it) that just want to have some fun, while blowing a few minds and melting some faces. Ask any of them, and they’ll tell you how incredible it is to play for a single person, or in front of a sea of faces. The BWSS has been, and will always be, about the feeling produced during a live show. There’s nothing like it, as far as they are concerned. Whether it is Jake Melius and the brutal mastery of his trademark Rickenbacker bass, Evan Nagle and Fred Speakman delivering a mind-blowing dual guitar attack or Justin Gimse’s locked in meter behind the kit, these guys have always had what it takes to be included in the upper tier of local heavies.

Big Wheel Stunt Show has appeared live for a set on KEXP, they have been Loud and Local Band of the Week two or three times on KISW and even mixed it up live on the Bob Rivers Show and the now defunct 104.9 The Brew. Hundreds of rock shows and and all that, led to magazine coverage and radio play from Brazil to Spain and London. The Big Wheel Stunt Show has probably had songs played in more countries, than states in the US.

We reviewed their 2017 release, Draygun Raygun at the end of last year and here’s a little bit of what we said:

Longtime fans of Big Wheel Stunt Show might also recognize some of the songs on this new release, as “Stuck Here Once Again”, “Red List, Blue List” and “Fools Time Now” appeared on previous releases but the band wanted to revisit these tracks and with the knob-turning wizardry of Jacinth Clifton, they sound better than ever and it was clearly the right decision. I’ve been a huge fan of theirs since 2010 when I first heard “Stuck Here, Once Again” and although I thought the song was as good as or better than anything I was hearing on the radio at the time, it’s even better now.

“Livin’ & Everything” is nothing short of a living, breathing, rock and roll thrill ride with Justin Gimse setting a blistering pace on the skins along with Melius’s lightning fast bass runs but always allowing plenty of room for the tasty harmonica work by Paul Ingram (Garage Heroes) to breath. Nagle showcases his ability to hit the high notes on this romp as well. “The Hunger Cough” is an instrumental that is a three and a half minute face-melter, successfully channeling Thin Lizzy, Led Zeppelin and Black Sabbath. They decrease the pace for the six-minute plus, psychedelically colored “The Attack” that hearkens back to the late sixties. “Fools Time Now” may start out as a nice little hand-clapping acapella piece but that is only a setup, it starts slow but before they are done it peels the paint off the walls. The album finishes on a high note with the reworked “Wheels Movin” dropping a ferocious rock & roll exclamation point on this sucker.

Big Wheel Stunt Show has long been know for their energetic live performances and this album succeeds in capturing that raw energy vibe in a studio setting. It would be hard to pick a favorite on this release but if you like your rock and roll dished up in heaping portions, Draygun Raygun has what you’ve been hungering for and you can even come back for seconds.

Check out Draygun Raygun HERE via Bandcamp (or click one of the players below) and purchase the album at CD Baby HERE. They’ll be playing a special Holiday Show at Tacoma’s Jazzbones on December 14, 2018. Check below for additional information about that one. 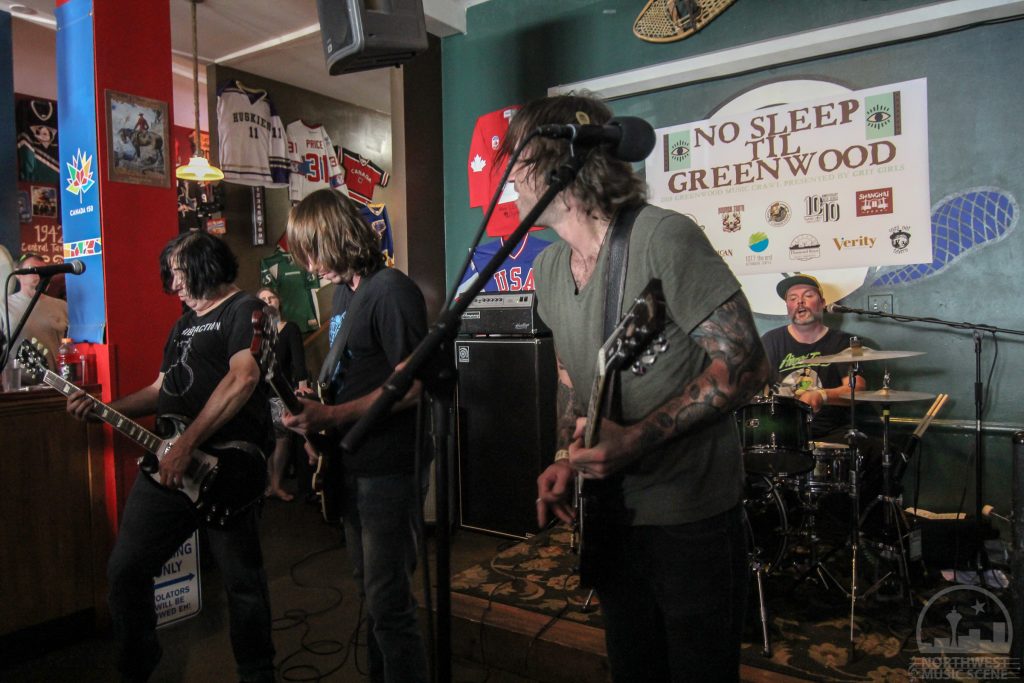 The band will be playing Jazzbones in Tacoma on December 14 with Danny Newcomb & The Sugarmakers and Lund Bros. Info about the show is available HERE.