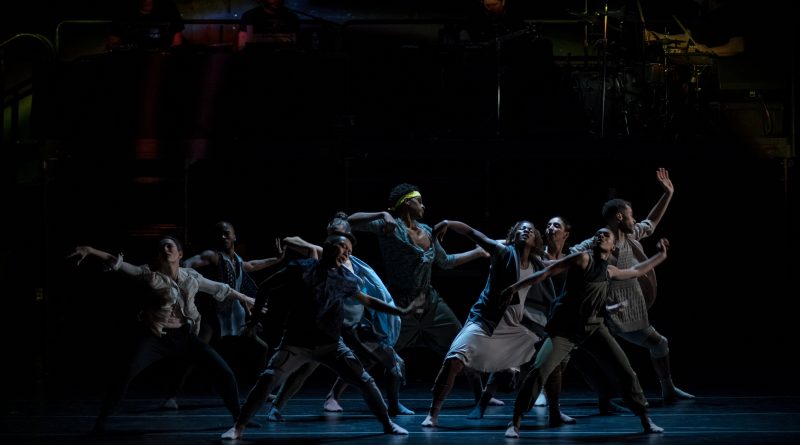 Justin Vernon aka Bon Iver and choreographer Uri Sands have created a very special collaboration together. The project, titled “Come Through,” is a parade of beautiful dancing paired with immaculate sounds served to the masses. We didn’t know what to expect walking into the Paramount Theater but we left knowing we got a lot more than expected. It was the first night of two sold out stops in Seattle and the audience was completely enamored with every second of the visually enchanting art piece.

The stage was empty other than the raised platform in the middle and lights on each side with a huge monitor hanging for the visuals that displayed throughout the night. Vernon and three bandmates took their place on the platform to create a live score as nine dancers performed on the main floor. The incredible partnership started off with Vernon and Sands meeting and deciding to exchange ideas. This led to Sands and the TU Dance company rehearsing in a big barn as Vernon watched their movement and responded with sound.

As the night progressed it felt that each art form became more and more intense as if the volume turned up a notch. The dancers were transmitting a powerful message though their bodies, Vernon was reflecting that mood, and the visuals perfectly emphasized both signals. The electrifying dance company navigates complex themes of social change, drawing together a variety of different movements. The new music by Vernon is more pop experimental and much different than what he’s released in the past.

Vernon seemed to be more comfortable not being in the spotlight as he so often is as a lead singer. It felt very organic for him to create the sound but stand in the background as the dancers took the lead and put focus on their craft. This was a unique collaboration that seemed very seamless as two worlds collided to produce something majestic. It’s not a dance performance, it’s not a concert, it’s something greater.