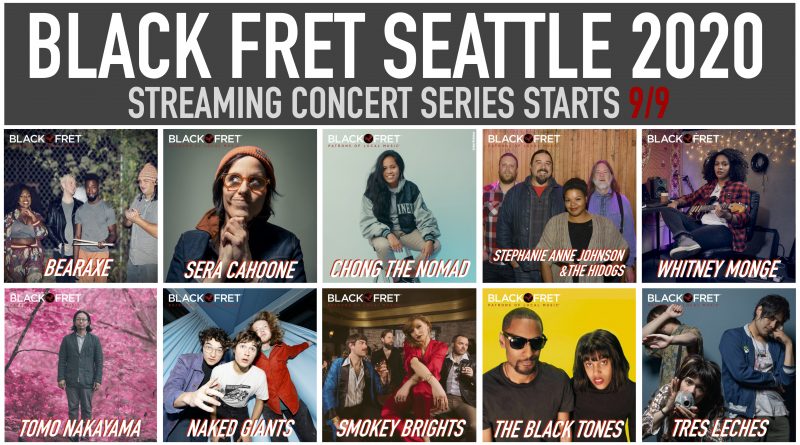 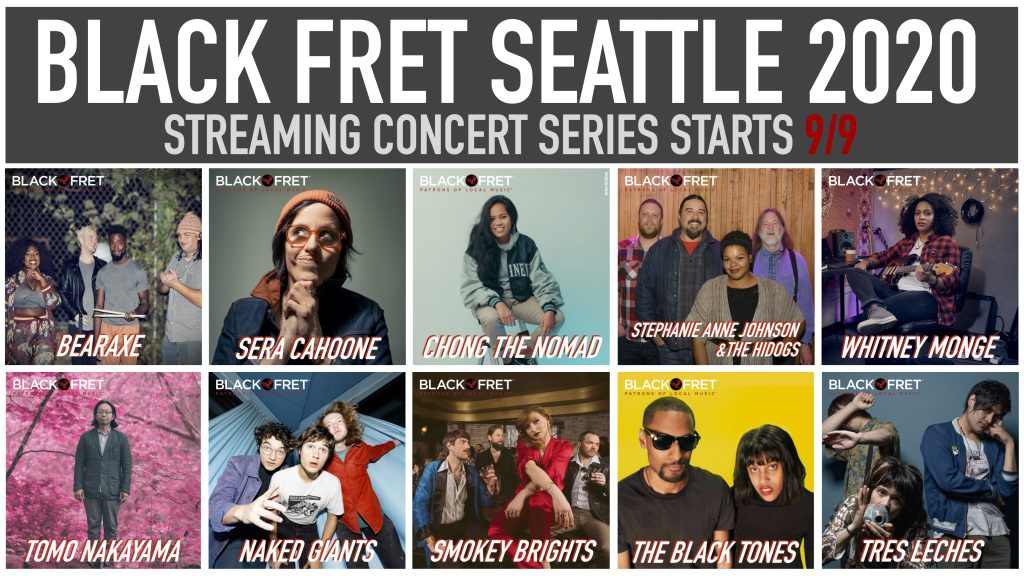 MUSIC NON-PROFIT TO AWARD $50,000 IN GRANTS TO SEATTLE AREA MUSICIANS.

After distributing over $1.75M to Austin, Texas musicians since 2013, Seattle chapter formally launched February 2020 in a first step towards becoming a national organization.

Black Fret is proud to announce the distribution of $50,000 to ten Seattle Area musicians and bands, fulfilling its mission to support the creation and performance of local music with this inaugural grant.

Black Fret is 501(c)3 Public Charity founded in Austin, Texas in 2013 which has distributed over $1.75M in grants and performance fees to the musicians of Austin. Black Fret provides members with a series of unique music experiences where they can witness the best and brightest of emerging local music and support the development of area musicians. Seattle is the first of what will be more new chapters outside of Austin and is confident this initial $50,000 in grants is the beginning of years of support.

Black Fret Seattle officially launched on February 29th, 2020, just as the COVID-19 pandemic began to publicly emerge in Seattle. The scope of the impact of this event could not be foreseen and the state’s shelter in place order stopped all events and large gatherings, putting Black Fret’s mission in jeopardy.

“We knew our city’s musicians couldn’t wait for things to get better. The entire industry has been stopped dead in its tracks so we accelerated our grants process to try and provide aid where we could” said Black Fret Seattle executive director Ben London. “While the pandemic has hit us really hard as an organization, it’s hitting our musicians even harder. We just couldn’t justify pausing our program until the pandemic ended”.

Each artist/band will receive a $5000 grant that they can use as they see fit to support their career development. Our 2020 Black Fret Seattle Artists shared their thoughts on the impact this grant will have:

“As a musician in these times, the support you’re giving us is truly incredible,” said Sera Cahoone.

Alaia D’Alessandro of Tres Leches remarked “We lost a lot of gigs due to COVID. This $5,000 will allow us to get back into the recording studio to finish up our sophomore album and be ready to tour it when safe to do so.”

“We intend to really use this money to grow the band. We have some new singles in the works, and this presents an opportunity to actually record and release them,” said Smokey Brights’ Ryan Devlin & Kim West.

“We started Black Fret to help support and magnify the musicians of Austin with the dream of bringing this program to other cities” said Black Fret founder Colin Kendrick “I can’t tell you how gratifying it is to see our dream come to life. The Seattle chapter is the first step towards expanding our program nationwide and helping musicians around the country.”

The 2020 musicians will be featured in a ten-week concert series streaming live from Nectar starting Wednesday September 9th at 8pm PST featuring Chong the Nomad.

Each show will act as a benefit for a different local non-profit. The first four shows will be held over four Wednesdays in September with additional dates to follow.

ABOUT BLACK FRET
Founded in 2013, Black Fret is a 501(c)3 public charity headquartered whose mission is to empower local musicians to create and perform great new music. The organization is an innovative evolution of the age-old symphony patronage model that is focused on supporting popular local music. Annual Black Fret member dues are $1,500 a year that can be paid in a single payment or monthly installments. Membership is 80% tax deductible and eligible for employee charitable matching programs. In return for annual dues, members will be rewarded with performances by some of the city’s top artists through a broad range of private events including monthly shows in intimate venues and an annual gala event named the Black Fret Ball. Those who wish to become a member of Black Fret Seattle can sign up at http://www.blackfret.org/SEATTLE. All memberships provide entry for the member and a guest to up to ten upcoming 2020 Black Fret events, including the Black Fret Ball. For inquiries, please email seattle@BlackFret.org