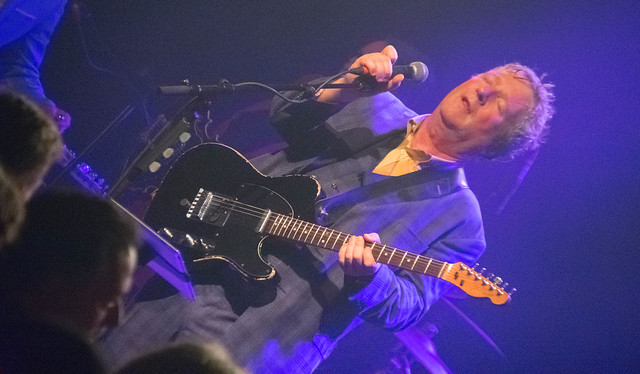 I don’t think of W. constantly anymore, several years post-breakup.  And she quit returning my signals, so I can only assume she thinks of me even less.  But Squeeze was her favorite band in the whole goddamn world, and if I was still with her she would have been my second on the evening of Monday the 9th down at the Showbox.

My friend M., who did make the scene with me, he’s English, but you don’t have to be English for his Squeeze reaction.  Every one of their hits, he said, shaking his head and smiling, so many memories, and a different memory for each hit. I’m younger than M. and had to dive into Squeeze via MTV, but I knew exactly his sentiments and that whole set stamped on the faces of the packed house.

First cardinal rule of the Showbox:  No place to sit! M. and went in early I swear, but then trotted one end to the other inside, and the only seating we could find required wristbands that we didn’t have.  I guess management figures that if you’re old (like this crowd, at least), you can pay extra to park your butt. My bad back was banshee-wailing after about two hours and my feet were going numb.  Memo to Showbox: Democracy for old bones!

X opened up, walking on about as old and fat and grey and stooped as us.  At least most of them have their hair. Billy Zoom, who cracked 71 back in February, looked regal in his reading glasses, but strummed sitting on a stool—yeah I thought, he gets to sit.  They lay in with “The New World,” which was facetious about Reagan when it came out in 1983 (“It was better before/They voted for what’s-his-name/This was supposed to be the New World,”) but facetious still when they played it during Clinton, during Obama—when this was supposed to be hope, in other words—and it’s come round rancid one more time given Big Orange.  The song never changes because people never change—it’s just that Big Orange plopped into the White House with his bigger anxieties for anyone who wants life and hope to go on. (I’d love life to go on. I’ve given up hope in the human race, but given the global New World, I’m late to renounce my card.)

X was once dangerous, along lines that everybody who wanted to be dangerous but not locked-up dangerous could scan (last time I saw John Doe, somewhere in the Clinton administration, he was sporting a Manson-with-that-stare t-shirt that read “Charlie Don’t Rave.”).  These days at least two of them lean alt-right—I guess they ran out of other dangerous ways. Drummer D.J. Bonebrake is  my fave punk drummer, too versatile for his own good punk rock name, though for some strange reason (health problems?) he stayed backstage half the gig and someone whose name sounded like “Craig Paraboe” worked the kit.  Eddie Vedder came out for a sing and looked like he was groping Exene, but no one complained.

M. had spotted Eddie Vedder (I hadn’t) and wondered if he was going to do something like what he did.  I was skeptical, and of course wrong. But ghosts, some more explicable than others, walked the ballroom all night.  I saw the two singers of the city’s best faux-Italian band (though rumor mill says one of them’s splitting to Montana).  I saw the Fastbacks’ Kim Warnick, still the queen and I hope you know what I mean—determined, strong, and funny.

Other times I felt other dimensions tugging.  Limahl from Kajagooggoo, who has not aged one iota since 1983, went back-and-forth with bar rags hanging out his pockets.  Somebody’s grandma, five-foot flat-top and a cap of white hair and grandma glasses, stood, and then sat (presumably she had a wristband), behind me.  She looked out at the stage seemingly with that understated wisdom that comes only to the very old (older than Billy Zoom even). But her phone, I had to chuckle, looked just like mine.

Squeeze calls this the “Songbook” tour, which translates as no new album to push and they dig show bringing back memories is the sweet spot.  So they hit the sweet spot quick, loud, and fast—the first half of the set flew by in five-or-so song blocks, no pauses in between, some Ramones-slam ironically showing up the much punker X, who, as much affection as I have for their tunes, just weren’t slamming down and snapping back as crisp as the epochal records and shows of yore.  I wondered if the seven-strong unit was just in a hurry to hit that backstage buffet, but they won me over with intensity. Glenn Tilbrook sings even better through his guitar than through his teeth, some smashing lead work shocking me but probably not the faithful.

So the tempos tended towards breakneck, and the percussion breakdowns betwixt Steve Smith and Simon Hanson (still boldy summoning a Mohawk out of what’s left on top) aren’t part of the original Top of the Pops formula.  Tilbrook and conceptual partner/lyricist/rhythm guitarist Chris Difford took pains to each tell the audience that the other one was responsible for everything. Both came off warm and modest, although you could tell Difford was modest when he didn’t solo during the solo turns at the big finish “Black Coffee In Bed.” He promised to have a guitar solo ready for the next time.

And that didn’t matter much in the end because this night meant jump-alongs, wave-alongs, and of course, singalongs (no mosh pit, though, not even for X—I’m hardly the sole owner of old bones).  “Tempted” got so involved with the bright-lights singalong I’m pretty sure they forgot the last verse. The parts that didn’t match the records sometimes stood out humorously—the bass player who occasionally sang bass, is long gone, for example, although Yolanda Charles staked out her own ground on that axe and at the mic.  But the crowd voted with its throats, putting itself in the picture. Age stamping itself upon youth, upon history, celebrated validation.

I thought of W. once or twice more.  I wondered what M. and everyone else had in their minds.  Then all out of black coffee, and time to hit the bed.