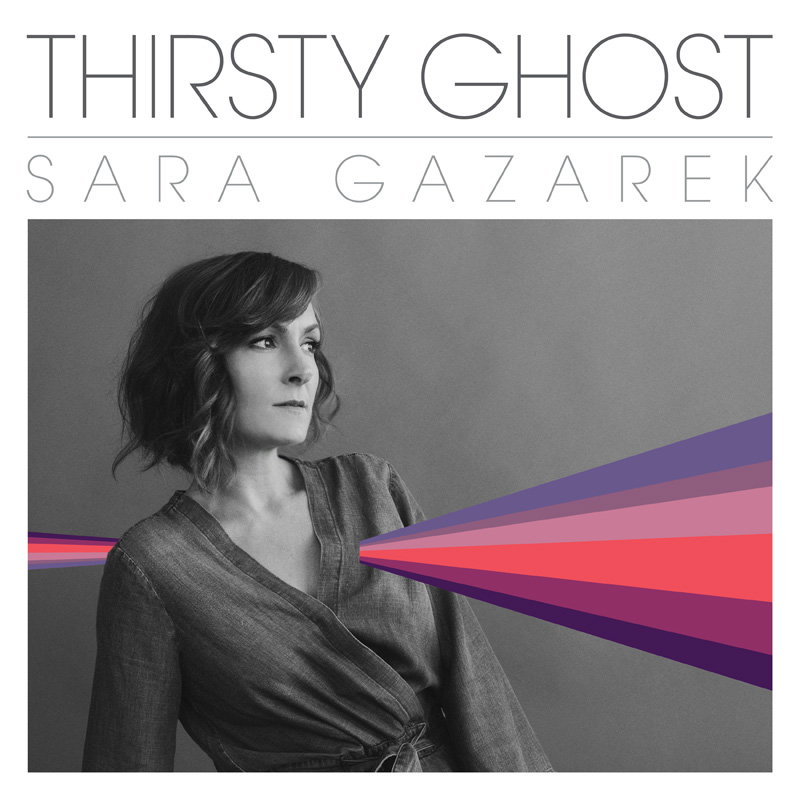 I probably-foolishly hunted for the rainbow arc in Thirsty Ghost, Seattle native Sara Gazarek’s seventh album of old tunes, new tunes, odd-for-a-jazz-singer tunes, all re-tuned to suit this particular arc. Which ain’t no rainbow—that was just me assuming simplistic—but rather, under all its conceptual and performance delights, one unsparing look at an ugly truth gazing balefully back at the human condition: Love, once gone, may well never come again. It can happen. You go out and look for it, you hunt and hunger; but life might well have other plans. It happens to people. We don’t talk about it but it lives unsaid. And the hunt, no warranty, is all you can do. Because the only other option is locking the hatch and living however long your years in your unassailable shelter.

I’m thinking of John Cassavetes as Robert Harmon in Love Streams, Harmon’s too-sensitive eyes and brash rationalizations, for all his wealth and all the fabulous people in his parties, he’s locked himself in. Confronted with lovers, or his own sister, or a child he never knew he had, he can only reach out millimeters before the unheard klaxon clangs in his head, Go back, back, retreat, run—it’s not safe, go back now!

He’s right, you know. It’s not safe. It’s not predictable. I’m not even sure if it’s teachable or learnable, love. Is it nobler to keep trying? Is lockdown understandable after you keep getting your heart cut out and fed to wolves?

Sara Gazarek has no definitive answers but then again, we expect answers from politicians; artists manage much better with questions. She’s changed lyrics and accentuations before, so when she doesn’t propose “mending” as a substitute for “pretending,” I figure she’s onto something bleak—even as she ferments entirely new rules for scat-singing at the beginning and false ending.

“Never Will I Marry”: Whistling in the graveyard, but then again, when you’ve got that much technique to put into insouciant defiance, it’s hard to hold back. Stevie Wonder’s “I Believe” isn’t slowed down, but taken apart, dismantling Wonder’s forward-thrust confidence to one-at-a-time flourishes, until the singer’s belief becomes yearning, not certainty. A tender manner, with fingers crossed.

Dolly Parton’s signature tune “Jolene” gets start/stop rhythms, 5/4 stretches (something also found, though with the original composer’s intent, in her take on Nick Drake’s “Riverman”), and something more complex than Parton’s plaintive begging to stay hitched. Gazarek lays out phrases unpredictably, spaghetti strands draping into the mix; and finally, down the home stretch, she’s ready to not only talk with but stay with Jolene, not necessarily sexually or romantically, but with an intensity and a richness of tone obliterating, finally, the guy who’s supposed to be at stake. He’s only the playfield for this particular game, and the song turns on a peculiar passion to turn our enemies (whom we might dismiss and/or destroy) into frenemies—whom we can keep close, can know, in an odd and sad (but intense) manner we might never bestow, on those we take to bed.

And towards the end, “Riverman” seems like a retreat, an entirely understandable retreat, into mysticism; casting aside the lady of the piece, who can’t seem to figure out anything, for the man of the title, who’ll hopefully (but not certainly) get the singer, the song, and everything else into things beyond words. Beyond procedure, beyond rational thinking, and beyond reason. Because those things, however sparkling to contemplate, just carry the pain.

And frankly, love might very well be outmoded. There, I’ve said it. I sat and watched this documentary on Japanese pop idols, who—in exchange for their male fans’ tacit agreement not to touch in certain places, not to ask for sex, and not to ask for romance—will shower each male fan with what feels like unconditional love and attention. Maybe that’s what we’ll all settle for. Because for so many of us, it beats the pain. It beats the knowing that it’s not safe out there.

Sara Gazarek acknowledges the pain. You’re bound to have it, if you take that fork. She’s astounding at mapping the pain, contorting with it, infusing it with nobility underneath elegance. And warmth. And the feeling that her music lives, as susceptible to bruising as anything else in the picture.

But she knows the choice is up to you.