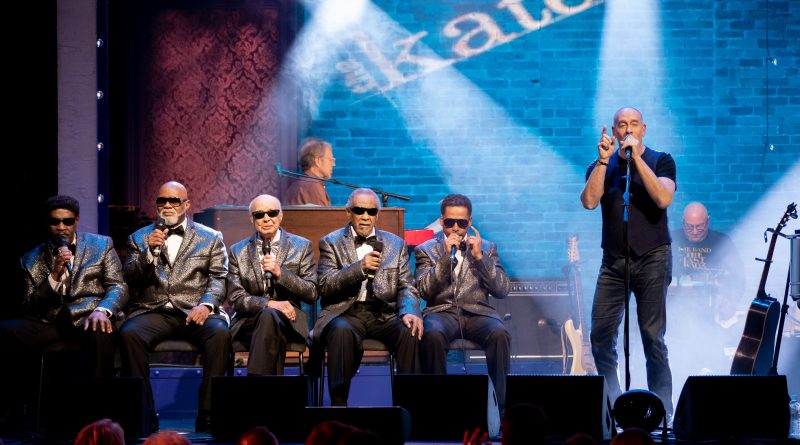 For anyone who missed out on the ‘90s, Marc Cohn came out of seemingly-nowhere to win the Best New Artist Grammy in 1992, survived Hurricane Katrina, survived getting shot in the head, found the Blind Boys of Alabama (a black gospel group active since 1939) and released an album with them, Work To Do, and he’s playing with them along with Taj Mahal at the Woodland Park Zoo on Thursday, August 15th. Well, that’ll do for the short form. Mr. Cohn was kind enough to take some questions.

NWMS: What are your best, worst, and oddest stories of playing Seattle?

Marc Cohn: I think it was the first time I ever played Seattle…but it was a free daytime show on the steps of the Art Museum. It was a lovely crowd and a beautiful Pacific Northwest summer’s day. Not sure if I noticed it before or after the show, but the X-rated movie house around the corner from the museum [the Lusty Lady strip club] honored me on their marquee, which said in big bold letters: “Bad To The Bone…Starring Marc Cohn!” A career highlight!

NWMS: Which places in Seattle are your favorite to visit and why?

Marc Cohn: My late brother Steve lived on Bainbridge Island with his family. It’s the place he chose to retire to. It’s one of the most beautiful places on earth and the site of some lovely reunions and get-togethers for the Cohns.

Such mixed emotions about that place though, because my brother should have spent at least another twenty years there looking out across the
Sound. No fair. How he loved it there.

NWMS: When was the first time you heard the Blind Boys’ music, or saw them perform live? What were your first impressions of the group?

Marc Cohn: I think the first time I really dialed in the genius of the group was when I heard their arrangement of “Amazing Grace,” which is sung to the tune of “House Of The Rising Sun.” I’m told that at first the group didn’t want to record it because they thought the arrangement was sacrilegious…but luckily they changed their minds!

I’m thrilled that a magnificent live version of that song is featured on “Work To Do,” our new collaborative album.

NWMS: Do you have a favorite song or album of theirs, and why?

Marc Cohn: I’d have to say I’m particularly fond (for obvious reasons) of the song “Let My Mother Live” which I co-wrote with John Leventhal and Jimmy Carter, the oldest surviving member of the group. The song is essentially Jimmy’s story about the early death of his father and his nightly prayer that God would let his mother live and not leave him to fend for himself in the world alone. It’s an amazing performance by Jimmy and we’re all immensely proud that it was nominated for a Grammy a couple of years ago.

NWMS: How did you adapt to the Blind Boys’ way of creating music, and they to yours? How do you feel you complement each other live?

Marc Cohn: For me, one of the most satisfying features of working together is when we step over into each other’s respective musical worlds. When we recorded the old Gospel standard “Walk In Jerusalem,” the opening track on our record, we all sat in a semi-circle and just sang the song a cappella. What you hear on the record is the second take after running it down once.

Maybe it took 15 minutes to record, and it’s sheer perfection. Just to get to sit in a room with the Blind Boys of Alabama and be part of that sound I’ve loved since I was a kid, the heavenly sanctified sound of a gospel group, was the musical thrill of a lifetime.

NWMS: What about the Blind Boys would surprise the average fan or person on the street the most?

Marc Cohn:  As an honorary member of the group, I’m sworn to secrecy!!

NWMS: What are your plans for the future, after this tour, with and/or without the Blind Boys?

Marc Cohn:  I’ve been working on songs that I hope will be part of my next solo record. I haven’t released an entire record of new material in quite
some time, so besides performing 80-100 shows a year…

That’s what’s next on the agenda. Of course, I’ll jump at any opportunity to perform or record with Blind Boys of Alabama. That’s the gospel truth.