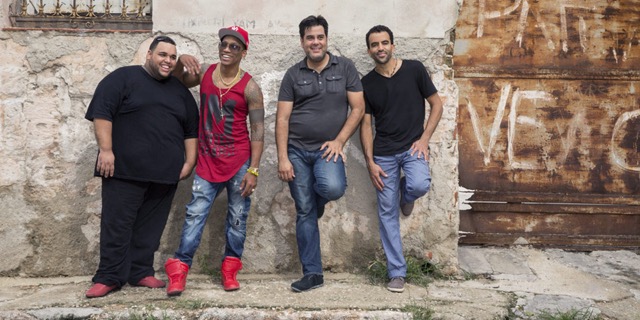 The Pacific Jazz Institute at Dimitriou’s Jazz Alley welcomes Grammy-nominated Cuban percussionist Pedrito Martinez and his band for two nights on May 1 and 2. Show times Tuesday and Wednesday at 7:30pm. Doors open at 6:00pm each night. Purchase tickets HERE.

“Pedrito is a genius…working with him has been a revelation to me.” – Wynton Marsalis

“The Pedrito Martinez Group is the real thing. They had the club JUMPING! It made me feel like a teenager!” – Quincy Jones

Pedro Pablo “Pedrito” Martinez was born in Havana, Cuba, Sept 12, 1973. Having settled in New York City in the fall of 1998, by 2000, he had been awarded the Thelonius Monk Award for Afro-Latin Hand Percussion and was featured in the documentary film, Calle 54.

Pedrito has recorded or performed with Wynton Marsalis, Paul Simon, Paquito D’Rivera, Bruce Springsteen, and Sting and has contributed, as a percussionist and vocalist, to over 50 albums. Mr. Martinez was also a founding member of the highly successful, Afro-Cuban/Afro-Beat band, Yerba Buena, with which he recorded two albums and toured the world.

Pedrito’s career as a leader began in 2005 with the formation in NYC of The Pedrito Martinez Group. The group’s Grammy-nominated first album was released October, 2013 and was chosen among NPR’s Favorite Albums of 2013 and The Boston Globe Critics Top Ten Albums of 2013.

Born in Perú and raised in New York, Jhair Sala spent his formative years studying intensively with Pedrito Martínez having met Pedrito when he was ten years old. He’s now in high demand as a session musician and bandleader in his own right, but there’s an uncanny magic when he plays with Pedrito. Jhair’s touch, timing, and feel, are truly remarkable and with literally thousands of hours of studying, performing and jamming together, the two drummers play as one.

Pianist, trumpeter, arranger and composer Edgar Pantoja-Aleman has devoted his life to an intense passion for music. He was born in Santiago de Cuba, and at the age of 11, began studying classical music, motivated by his mother who discovered in him innate musical inclinations, especially, in Afro Cuban rhythms.

The trumpet was his first instrument and the beginning of a long journey, taking up the piano early on, as well. From 1994-2008, Edgar worked as a teacher, in Havana and in Spain, instructing in piano, brass, harmony, and percussion. He has lived in New York City, since 2008, where he has performed with David Murray, Pedrito Martinez and many others. Edgar joined The Pedrito Martinez Group in November of 2014.

Sebastian Natal Nuñez was born in Montevideo, Uruguay, in 1984. He began piano studies at the age of 4. His musical career began at the age of 10, performing as a pianist and percussionist, with legends of the Uruguayan folklore, like Malumba Giménez and Jose Pedro “Perico” Gularte and international artists like Giovanni Hidalgo and Oscar de León.

In 2008 Sebastian relocated to New York City, he began to work in public schools. His knowledge of piano, bass, percussion, trumpet, trombone and vocals, together with his great skills as producer, have allowed his career to flourish, with his own groups, like D son 3 (a trio) and Candombe Fusion. He is also a member of the Tematik Orchestra along with Jhair Sala and has lent his talents as a producer, working alongside 5-Grammy winner Willy Torres.

Sebastian joined The Pedrito Martinez Group in the Fall of 2016.