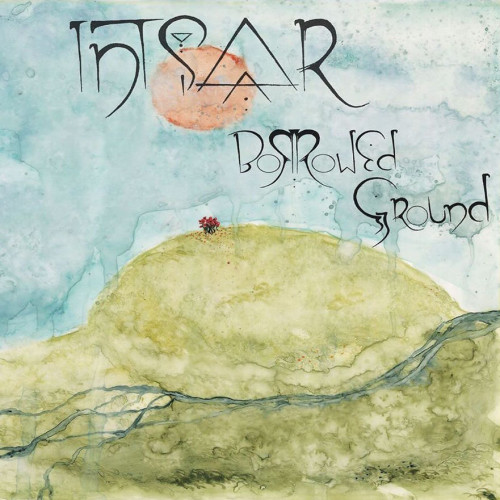 From the very first few notes of Intisaar‘s Borrowed Ground, the listener might get the sense they are in for something special. This hauntingly brilliant piece of work is the product of a Seattle-based duo comprised of Tess “Intisaar” Jubran on guitar/vocals, and Natalie Mai Hall on cello. In the live setting, Intisaar is a dynamic acoustic powerhouse rich with emotive melody, hard-hitting rhythms, and compelling arrangements, and on this debut release, they work together to create some magical moments.

Oftentimes in reviews we like to throw out pull-quote-worthy gems comparing the artist to their peers but there really isn’t much to compare this album to in Seattle or beyond, although the eastern influence does remind me of Vas in certain places. At times, they seem to borrow sparingly from a few genres such as soul and the blues, but what they’ve accomplished here is creating a completely unique sonic world in which these songs can live and thrive in. While the instrumentation is first-rate, it is never over bearing; instead, it all seems to find its own place in each of these lovingly-crafted tunes.

Borrowed Ground, released in October of 2015, is eight songs ranging from the 49-second long “Interlude” to the nearly seven-and-a-half-minute long epic journey called “Territorial View.” On the aforementioned “Interlude,” Intisaar introduces us to zen-like tribal drum beats, leading directly into the finger-picked guitar-driven tune called “Dracula.” “Territorial View,” the hypnotic closer to the album, begins with a cello that attempts to incite a trance-like state before increasing the tempo, while at the same time allowing Intisaar’s beautiful voice to deliver the message and seal the deal.

“Convict’s Lullaby,” clocking in at 4 minutes and 47 seconds, displays a sort of new age soul, if not a hint of blues sprinkled on top. The song needs very little other than Intisaar’s incredible vocals to sell the track, and indeed that’s what they deliver. A slowly-picked guitar works brilliantly with her voice, with some delicately placed cello work playing cameo roles in key spots throughout the track, as to not over-do the song.

Although this is their first album together, one gets a sense that Jubran and Hall will be doing this again. In their bio, they list any number of influences from the Beatles to Radiohead to Tori Amos, which makes perfect sense when listening through Borrowed Ground. At times haunting and ethereal, at others guttural and aching, Tess Jubran’s vocal stylings are joined with Natalie Mai Hall’s versatile cello lines, which serve not only as pads, but also guitar solos, counter melodies, percussion, and ambient noise.