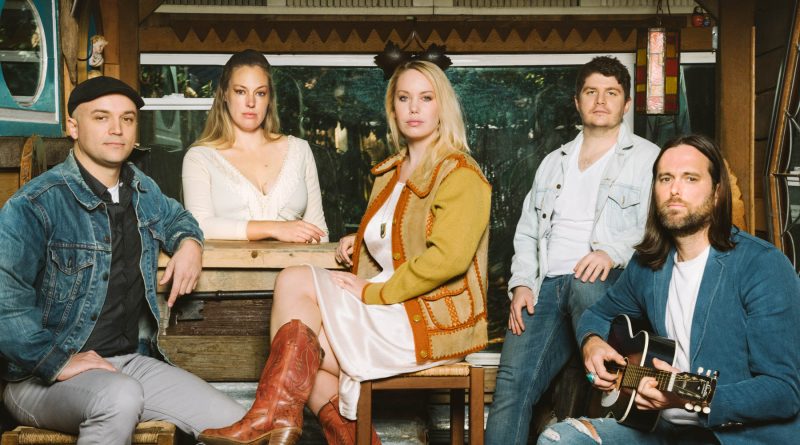 The Get Ahead, Portland’s five-piece roots-and-folk-and-rhythm’n’blues-‘n’things quintet, bring their stuff, though not necessarily the new baby (see below) to the Triple Door on Saturday, April 13th, touring behind their new album Deepest Light.  I didn’t hear from bassist Sean Farrell, drummer Danny Johnson, or saxophonist/violinist Angie Johnson, but guitarist Nathan Earle and singer Juliet Howard, collectively, took some questions.

NWMS:  Has the band played Seattle before?  If so, what are your favorite and least-favorite stories from the city?

Nathan and Juliet:  Yep. Neumos was a real highlight. We played with our friends Grace Love and Carlene Crawford (and DJ Indica Jones), and had such a fabulous time. It was our first time in Seattle, the first time we had ever played on a bill with other bands and still had our own green room, and the whole thing just gave us all of the feels. We felt like we had been welcomed to Seattle.

Our least favorite is probably the last time we played in Seattle. We decided to head back to Portland right after the show, and we made it within 30 minutes of home when the van just stopped. It was three in the morning and we were on the side of I-5 in the cold waiting for over an hour on the tow truck. Turns out our fuel pump had decided it was done pumping.

NWMS:  What are your best, worst, and oddest stories, from touring?

Nathan and Juliet:  We have had such a great time out on the road. It’s always so great to be able to share what we do with folks outside of Portland, and we’ve overall been super well received. We have definitely had some highlights and lowlights, though.

I would say the most recent highlight was having the honor of playing at the Pendleton Lodge as the first band ever. It’s going to be such an amazing venue and we will always have the memory of being the first.

A recent lowlight would have to be playing in a venue where there was a basement bar that was having a DJ dance party. We kept calling it “playing in a hallway” because folks were coming out to go to this dance party event, and would have to walk through the room we were playing in to get there. We captured folks’ attention, but for the most part it was tough to compete with the dark cavernous meat market they had come to enjoy.

NWMS:  The band was formed out of “shared love of old soul, gospel, and R&B music.”  Who are your favorite performers in those categories, and
why?

Nathan and Juliet:  Juliet and Nathan have always loved Ike and Tina, and I’d say we were inspired by their work when we started out. Tina Turner just has this voice with a powerful current of electricity coursing through it. It’s just amazing that she has always been able to sing with that rasp and that power without losing or damaging her voice.

Sam Cooke is a huge favorite as well–the epitome of excellence in every way. Honey sweet and indelibly poignant. The top of our recent fave list is Charles Bradley without a doubt.  He lived a life pouring out radiant love and still didn’t sacrifice grit.

NWMS:  How did the band members first meet?

Nathan and Juliet:  Juliet and Nathan met at Rose City Rollers roller derby events, and sang together for the first time in a kitchen at a derby party. Sean and Juliet have been friends since they were teenagers living in SoCal. Danny joined the band when our first drummer moved to Austin, and he met Angie when they were seated next to each other on an airplane. Love at 30,000 feet.

NWMS:  What are the best and worst things about Portland, musically and otherwise?

Nathan and Juliet:  The DIY culture that exists in Portland continues to be a huge strength. There has always been a huge amount of self-driven and inspired artistic talent condensed in this little city.

However, many of these artists who contributed to making Portland “Weird” and those who continue to enrich the city with their art have been priced out of living in the city due to overwhelming influx and migration of “new Portlanders” and the exhausting developments that have occurred in the past decade.

Musically, Portland has a rich and well-rounded landscape of genres and sounds, but we have always found that Indie Rock continues to be portrayed as the palette of Portland. We love our hometown, though. The food, the options in terms of outdoor activities, night life, and cultural events are fantastic.

NWMS:  The band consists of “a new mother, two couples, and five good friends.”  How do the dynamics of the group grow and change?

Nathan and Juliet:  Overall, we feel like we are all just growing closer. Like any group, if you don’t improve in your ability to communicate musically and personally then it’s impossible to grow or to sustain the thing as a unit. We’re getting more comfortable all of the time being honest about how things are impacting us in our interactions and in our feelings about particular elements of music and art we create.

We have all had moments where we had to compromise, but overall we have grown to trust each other and each individual voice as we navigate decision making creatively and logistically.

NWMS:  How did the new mother’s pregnancy and delivery influence the band’s music and overall direction?

Nathan and Juliet:  In many ways it has really made us bolder and more daring. Having an infant in the band has definitely made rehearsing, completing all of the logistical and artistic tasks, and touring much more difficult.

We have been really lucky in that we have had amazing family support for childcare during rehearsals and touring thus far. The music hasn’t changed drastically, but the whole experience has definitely made for a much more grounded and focused approach in many ways.

When we are playing outside of Portland and Freyja (Nathan and Juliet’s babe) is home with family, there is a very strong sense of “We know what we are here for and what we are sacrificing to be here.” We are much more present in performance and focused on giving audiences our music at “full power” so to speak.

NWMS:  Where did you record Deepest Light, and who recorded it?  Favorite stories from recording?

Nathan and Juliet:  We made the record at a great place in Portland called B-side records with Raymond Richards as both the Engineer and Producer. It was this great place with perfect sight lines that allowed Danny, Nathan, and Sean to see each other and to communicate visually while tracking rhythm, which we always try to do as live as possible.

One of our favorite stories is the recording of “Peach Tree,” the final song on the record. Nathan wrote this song for Juliet, and she had never heard it. She trusted the band to go in and make a recording of it and to commit to it being on the record before she did. Angie made some lovely sax parts and Nathan played some pump organ, and Juliet loved it when she heard it. This song is a special one to perform, also, because we have adapted it to include the full band and three part harmony that swells at the end, and Juliet gets to join in and sing.

NWMS:  Nathan and Juliet got married on the Oregon Coast.  Where exactly did they pick, and why?  What were the highlights of the ceremony?

Nathan and Juliet:  Nathan and Juliet had a magical ceremony in a very special place, and they are firm believers that the less they talk about it, the more they honor and preserve this magic.

Nathan and Juliet:  We are excited for the official release of our newest album, Deepest Light, on April 26. We’re also looking forward to summer festival season, working on material for new recordings, and basking in the glory that is a Northwest  summer.