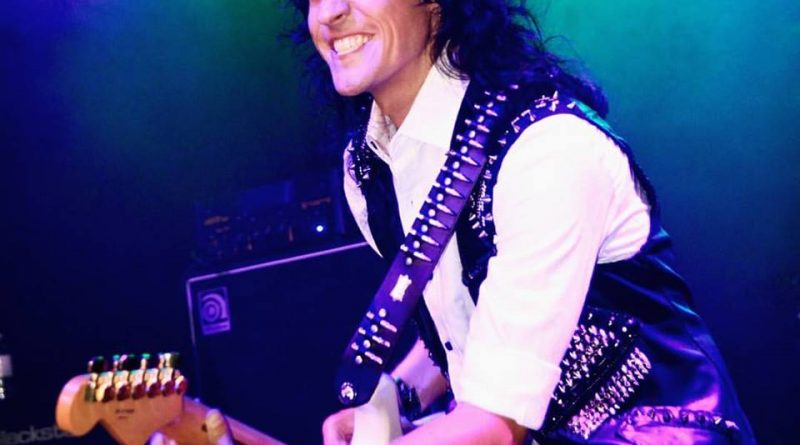 Rocky moved from Norway to Los Angeles to advance his musical career and is making his second trip to Seattle. He visited last year to see one of his favorite bands, Metallica, headline an epic concert at CenturyLink Field. This year, he’s back for a headlining gig of his own – tonight at HempFest.

Rocky chatted with Northwest Music Scene about his musical upbringing and his love of 80’s heavy metal. He also shared why he supports hemp as a key weapon in the future of our planet’s sustainability, even though he does not use cannabis recreationally.

NWMS: You have a classical music upbringing. How and when did you first hear a metal band?

RK: My first experience seeing a live band was a sound check. My father was the First Violinist in the Trondheim Symphony Orchestra. They were doing a New Year’s Eve special that was going to be televised nationally and he took us with him to the sound check. TNT were performing one of their new singles and they had the smoke machines! It was my first experience seeing a rock band live and it was very influential. It went from that to KISS. There was a neighbor who had a few KISS cassettes. KISS was my first metal band, if you want to call them metal. Some people call them heavy metal. I think they’re on the “nicer” end of the spectrum  – more on the commercial side. So, it went from KISS to Iron Maiden to Metallica to all kinds of bands. It was a slow progression. You start out with one band and people say, “if you like that then you might like this.”

NWMS: Who else introduced new music to you?

NWMS: When did you begin playing guitar?

RK: I started playing the violin when I was seven. About the same time, my brother got an acoustic guitar. He’s the one in the family who started with guitar. I picked it up when I was nine, but it wasn’t the right time yet. When I was eleven, I decided I really wanted to play the guitar and that was when I took over my brother’s guitar and it was pretty much always in my room because I loved playing it so much. I would play for hours. Eventually, I saved up enough money to buy my own guitar and it just snowballed into… this (laughs).

When I started playing guitar, I was into Ozzy Osbourne, particularly because of Randy Rhoads. When I was thirteen, after I bought my first electric guitar, I fell off my bike and broke my collarbone. And my doctor said, “you can’t move your left arm for a week.”  So, I said, if I can’t play guitar, I’m going to study guitar. And that’s when I started studying the shredders of the 80’s, like Yngwie Malmsteen, Steve Vai, Joe Satriani, Paul Gilbert, and so on. Because I couldn’t play, I wanted to learn something new and that’s when I discovered all these new ways of playing. Hearing Yngwie Malmsteen combining metal with classical music completely changed my world.

RK: I started writing my own songs on Guitar Pro (started with GP 4, then 5 and still uses 6). It’s kind of the simple way of doing it (inputting notes). I take it from that and I move on to Logic and make more professional demos, which is something I’ve done more in the last ten years.

About the songwriting process: I think, for the most part, I never really decide to write a song. It just happens. Generally, it’s the melody that comes first. It’s really kind of an effortless thing. It’s either there or it isn’t. I’m not the type to write one note and say, okay – what should be the next note? It’s either there or it isn’t. I might be playing guitar and I’m playing something and it’s all just random things then all of a sudden, out of nowhere, I’m playing this riff and I’m like “oh my god, this is great.” I would just record it immediately. The process of doing this when I was sixteen is what became the album I’m performing (at Hemp Fest), called Firestorm. It was compiling all these audio clips and seeing what fits.

NWMS: How did your band come together?

NWMS: You don’t use cannabis, but you’re headlining at HempFest. Tell me about your passion for promoting hemp as a resource to help make our planet more environmentally sustainable.

RK: I’m from Norway. Norway’s not necessarily a country that embraces hemp, but it is a country that embraces sustainability and the future of our grandchildren and everything. When I came here, I didn’t know much about hemp, other than it being used for smoking it to get high. When you actually look into the plant, it’s a lot more than that. That’s something we want to talk about more because I think a lot of people forget about the fact that when you have the CBD oils, you can reduce somebody’s blood sugar tremendously and that’s almost a matter of life and death if you have diabetes. Medically, it has a lot of benefits. On the other hand, the classic form of plastic is not a renewable resource because it’s made out of oil. With hemp, you can make a type of bio-plastic that is not only as strong as regular plastic, if you do it the right way, it can be stronger than steel. When you think about the strength of hemp, in that sense, when you use it in the right way, industrially, all of a sudden you have this whole market, this whole industry of products that are more sustainable, that’s not bad for the environment, because hemp is biodegradable.  All of a sudden, we’re seeing more of a future, more than destroying the future, as we find more plastic and garbage inside the stomachs of dead fish and whales. The whole point of promoting hemp is that we want a sustainable future and we believe that hemp has so many purposes.