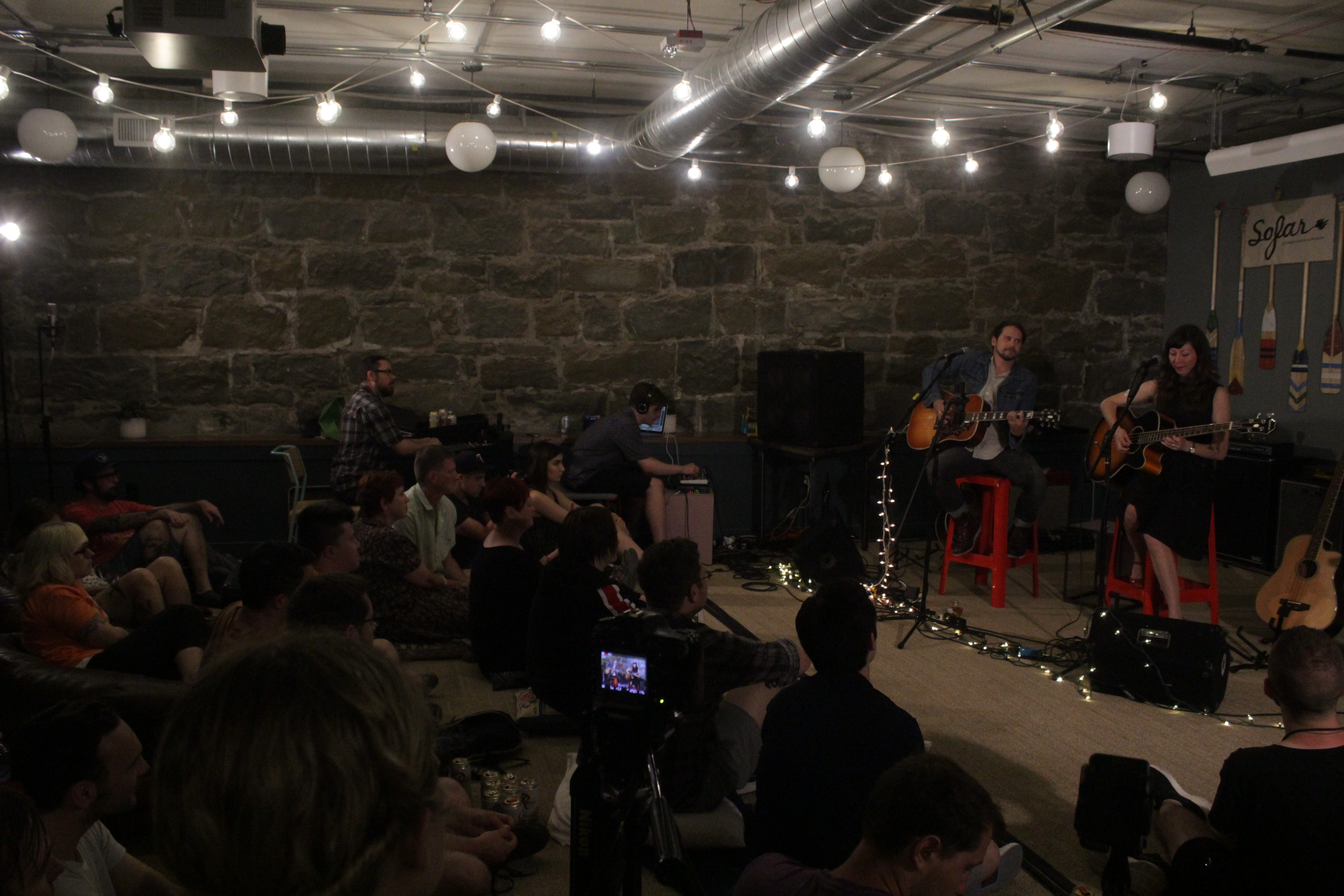 I’d never been to a secret show prior to Sunday night, but I’ve always admired them from the outside as seeming way cooler than the average public venue show. Venue shows are great if you like playing “Try to Hear the Artist You Came to See Over a Pack of Valley Girls All Shouting at Each Other While Trying Really Hard to Keep the Cocaine They Just Snorted in the Bathroom Up Their Nostrils,” and trying to deal with needlessly-aggressive dude-bros trying to start mosh pits in the cramped all-ages sections of mid-paced electronic music shows, but something about the intimate and quiet environments of secret shows always struck me as being a much better way to see bands you like.

The Seattle division of global secret show organizers Sofar Sounds took my secret show virginity on Sunday night, when they tapped famed alternative rock outfit Silversun Pickups, and two local Seattle acts, Alki and San Juan, to play a handful of songs each in a shared office space in the middle of Downtown Seattle, to a crowd of, at most, 150 people. Sofar Sounds has been at this for a while, organizing live shows all around the world, but usually their Seattle secret shows are from locally-famous acts like Kris Orlowski, Cumulus, and Shelby Earl. Getting a nationally-renowned act like Silversun Pickups to show up and play at a low-key office building in Seattle struck me as being a pretty huge deal.

Seattleites Alki started the night off right with their electronic programming-infused indie and alternative rock. Electric guitars and bass were backed up with electric drum MIDI controllers, synthesizers and, at one point in the night, a colorful MIDI sampling pad to add extra flavor to one of their more playful tracks. Their tracks reminded me a bit of other electronically-tinged indie rock acts like Robert DeLong or Young the Giant, although with less flashy, bombastic choruses. Despite some technical difficulties with their equipment and dual vocals from Danny Castro and Jonny Lee, they were an enjoyable group.

After a brief 10- or 15-minute interlude, fellow locals San Juan were up. During their introduction, it was mentioned that at these shows, they like to come together with sonically diverse lineups as to not seem monotonous, and this was especially felt between Alki and San Juan, since the latter’s more rootsy music was instrumentally driven solely by guitar, bass, and drums. Their brand of alternative rock felt pretty no-BS, with soulful vocals backed up by a great natural guitar tone and tender bass lines. Usually at shows like this, tapping local openers is both a blessing and a curse, as while the bands get the exposure and the experience, it can be hard for fickle crowds to warm up to these bands they’re unfamiliar with. But at this show, I got the feeling that the local bands were on equal ground with the Pickups, with careful, silent attention paid to each note played by both bands, and monumental applause between songs for each.

Silversun Pickups members Brian Aubert and Nikki Monninger entered the ground-level performing area from the back, and picked up their acoustic guitars and bass, following the insane amount of cheering from the small crowd. Energetic, loud, and mildly intoxicated, Aubert and Monninger went right into their set guns blazing. Despite being all acoustic, their performance was just as lively as it is on record, and Brian’s impassioned vocals filled the space to the extent that he probably could’ve not been mic’d at all and still have rang clear through that building.

Throughout the band’s concise five-song setlist, there was nary a dull moment. There was a good deal of stage banter between the two members between songs, and you really got the sense that they loved performing together and loved the intimate environment of the Sofar show. Seeing as the band typically plays huge festivals and regularly sells out venues (Silversun Pickups went on to completely sell out the Showbox the next night), it was probably a nice change of pace to play their beloved radio smashes in such a small and friendly room. Aubert had an interesting dynamic going on with the assistant “Easy Eric,” who would bring him his different guitars in between songs. In one instance, Brian couldn’t reach his 1/4 inch cable and mock-whined Eric’s name to come and bring it to him, and when he wouldn’t come to bring it to him, the in-house sound guy tried to hand it to him, to which he threw it on the ground because Easy Eric didn’t hand it to him. Brian and Nikki’s playful and easygoing interaction with everyone in the room made for one of the most unique concert environments I’ve ever been a part of.

As everyone expected, a few songs in, the band’s biggest hit “Panic Switch” made an appearance, as the song’s iconic opening riff led to the crowd going hog-wild. They ran through the song’s first couple verses as normal, but over the bridge, Brian decided to get up and walk through the seated crowd and go and sit on one of the many rows of couches to sit next to a random audience member and wrap his arm around him, shooting the shit with him while Monninger continued to hammer on the same main bass riff, unsure of what to do. “You’re doing great!” He shouted from the couches. This lasted for probably a minute or two before Brian rejoined Nikki on the stools, but not before taking selfies with the other people on the couch.

Fellow alt-rock favorite “Lazy Eye” closed out Silversun Pickups’ set with a bang, giving fans one last taste of the band’s biggest songs before they would go on to pack out the Showbox the following night. While I’m sure the full band sounds great playing together in a big venue space, there was something singular and magical about seeing a band of their level in this sort of way. It didn’t feel like there was that sort of barrier between the performers and the crowd, everyone was one in this space, as the duo spent a few minutes talked with the crowd about the latest episode of Game of Thrones between songs. If you ever have the chance to go to one of these Sofar Sounds shows, I highly recommend it, there’s truly nothing like a good secret show. The mutual drunkenness doesn’t hurt either.