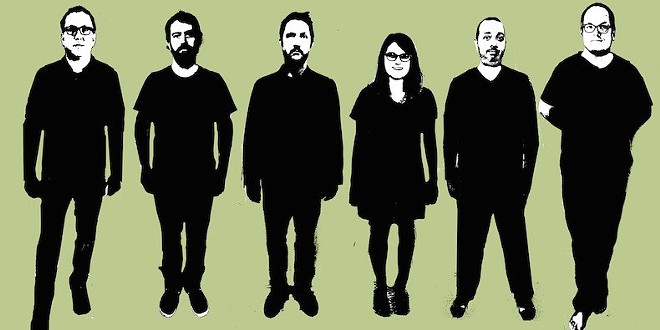 But the band’s remarkable eighth full-length, Vitriola, required a different approach — one less rigidly themed and more responsive as the band struggles with existentialism veering towards nihilism and despair; the ways in which society, much like a writer, creates and destroys; and an oncoming dystopia that feels eerily near at hand.

Cursive has naturally developed a pattern of releasing new music every three years, creating records not out of obligation, but need, with the mindset that each record could potentially be their last. 2015 came and went, however, and the band remained silent for their longest period to date. But the members of Cursive have remained busy with solo records, a movie (the Kasher-penned and directed No Resolution), and running businesses (the band collectively owns and operates hometown Omaha’s mainstay bar/venue, O’Leaver’s).

The band even launched their own label, 15 Passenger, through which they’re steadily reissuing their remastered back catalogue, as well as new albums by Kasher, Campdogzz, and David Bazan and Sean Lane. And like many others, the band members have been caught up in the inescapable state of confusion and instability that plagues their home country, and seems to grow more chaotic with each passing day.

Tickets to their forthcoming performance at The Crocodile on January 25th, 2019 with special guests Campdogzz can be found and purchased here.