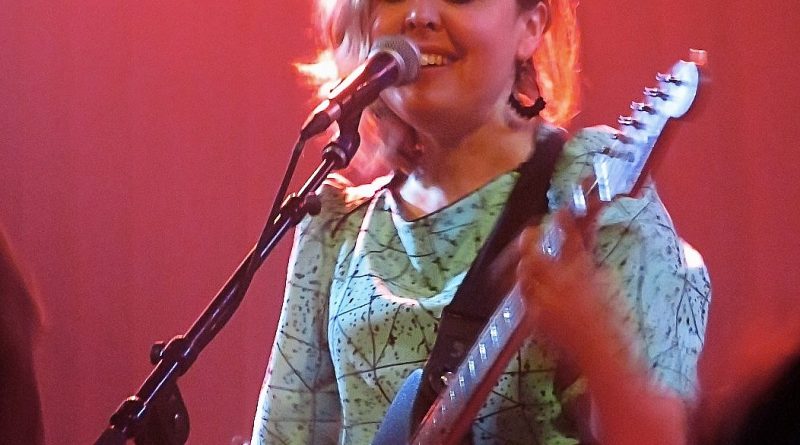 May 9 was a double header for fans of Filthy Friends in Seattle, with an afternoon showcase at KEXP’s Gathering Space, and a full set later that evening at Neumos. It was great to see them back in action after Scott McCaughey’s stroke in 2017 (which led to the cancellation of the band’s last Seattle appearance). Happily, McCaughey’s recovered, and his wide smile indicated he was thrilled to be back in action.

The band — McCaughey, Corin Tucker, Peter Buck, Kurt Bloch, and Linda Pitmon — is currently touring in support of their terrific new album, the sobering Emerald Valley. As Tucker explained at that evening’s show, the album was inspired by the great beauty of the Pacific Northwest, and threat that beauty is currently under, due to humanity’s ever-expanding encroachment. A ten-track album about a country in turmoil.

The evening set opened with the band’s bracing anti-Trump song “November Man,” a sad distillation of the woes of having the current occupant of the White House. Over a bed of snarling guitars, Tucker’s clear, strong voice sang of shattered dreams and lives undone. There was little political commentary between numbers, because it wasn’t really needed; the band’s many songs of resistance make their feelings plain, whether they’re about the destruction of the environment (“Pipeline,” “The Elliott,” the latter a reference to Elliott State Park in Oregon), racism (“No Forgotten Son,” inspired by the murder of Trayvon Martin), immigration (“Angels”), or wicked politicians (“Despierta”).

The band has a more forceful, energetic sound live than on record. Their genetic make up is also more obvious as well, as Filthy Friends is an inventive mash-up of the spikiness of Sleater-Kinney (Tucker) with the chiming guitars of R.E.M. (Peter Buck, Scott McCaughey). If you’re a fan of either band, how can you resist? There’s a relaxed feeling of camaraderie among the musicians that was fun to watch. And consider that between them, the band members have been in dozens of indie rock outfits; in addition to the aforementioned bands, Bloch’s been in the Young Fresh Fellows alongside McCaughey, and Pitmon’s been a member of the Baseball Project and Steve Winn and the Miracle Three, to mention just a few groups on everyone’s joint resumes. It’s like a distillation of the very best of indie rock.

Filthy Friends ended up playing all but one of the songs on Emerald Valley, and most of the songs on their self-titled debut as well. For my tastes, Emerald Valley is a bit more restrained than its predecessor, so it was great when the band amped up the energy with a driving, intense track like “Last Chance County.” That’s the song that closed the main set, followed by a two-song encore, featuring the slower, somewhat ominous “Hey Lacey,” and the peppy “Any Kind of Crowd.” All in all, a great night; these “Friends” are welcome to drop by anytime.