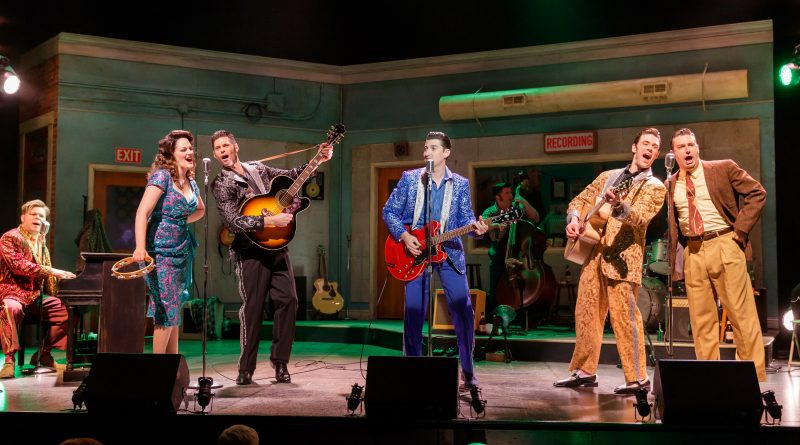 The original “Million Dollar Quartet” went down on December 4th, 1956, at Memphis’ Sun Studios, where Sun’s biggest stars — Elvis Presley, Carl Perkins, Jerry Lee Lewis, and Johnny Cash, gathered together for a sing, and a pound on the piano. It’s still considered a pivotal moment in rock and roll history.

The stage version of this amazing story, with a book by Floyd Mutrux and Colin Escott, plus of course all those seminal songs, had its world premiere at the Village Theater in Everett and Issaquah, back in 2007. This new production runs once more at the Village, in Issaquah through June 23rd, then at Everett from June 28th through July 28th. Director Scott Weinstein was kind enough to take a few questions.

NWMS:  Casting four music legends can’t be easy.  Who plays each of them?  How did you find them, and what does each one bring to his part?

Scott Weinstein:  Casting is definitely one of the most challenging aspects of this show. Since they’re playing truly iconic figures they need to first of all bear a passing resemblance to them, but even more importantly need to be virtuosic musicians and actors who can take those things that are so iconic and channel them through themselves. We looked all over to find the perfect people and I really think we found them. Some are musicians first and some are actors who are amazing musicians. Jason Kappus who play Elvis is from the area, Skye Scott who plays Carl Perkins is from New York, John Countryman who plays Jerry Lee Lewis is a musician from North Carolina and Maryland and Brian Grey who plays Johnny Cash is an actor based out of Chicago.

NWMS:  What did running the show teach you about the music, and the culture that spawned it?

Scott Weinstein:  It’s been so amazing to get to take a deep dive in to the world of this show and see how this music continues to inspire musicians today. There is a reason these songs are so timeless. I’ve really come to think of this show as embodying the American dream in a lot of ways. All four of these figures, and Sam Phillips as well actually, came from absolutely nothing – every one of them dirt poor – and rose to be about as famous, influential and successful as one can be. I think that’s a really beautiful thing.

NWMS:  What were the most surprisings aspects of the show?

Scott Weinstein:  I’m always (pleasantly) surprised to find that in addition to loving the music that the audiences are connecting to the story and the characters in an emotional way. They really care about what’s happening to them in our true story and often respond vocally to it.

NWMS:  What were the hardest aspects of putting the show together, and how did you work through those challenges?

Scott Weinstein:  The hardest part is making four performers into a true band – because that’s what they need to be. We need to create a chemistry among our performers that seems like they’ve been playing together and known each other for years. The way we do that is we treat the first week like its band practice. We very deliberately focus only on the music that week. We go through it over and over and over again until its in their bones and they can really have fun with it and each other and be spontaneous. You can only really take risks we each other when its part of your DNA and you have that kind of camaraderie and trust. So that week is really important.