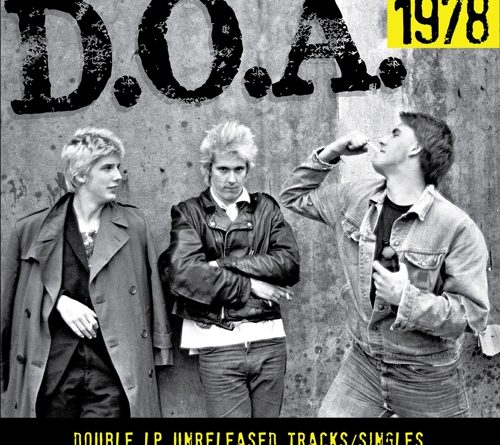 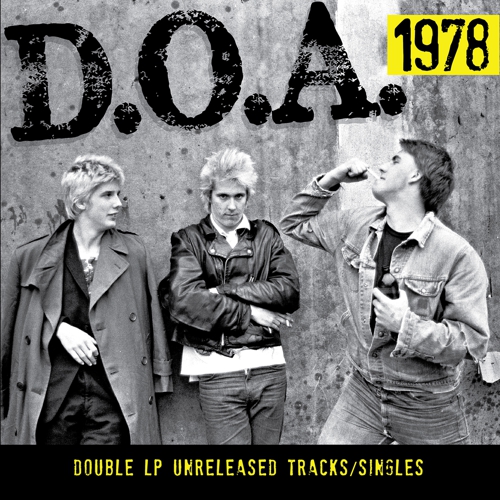 D.O.A. sprang to life when Canadian Joe Keithley found himself back in Vancouver, B.C., following a move to Toronto with his band the Skulls, which had seen the band fall apart. Undeterred, Keithley found new musicians to play with in Vancouver, everyone taking on the requisite punk names: Randy Rampage (bass), Chuck Biscuits (drums), and Keithley himself, on lead vocals and guitar, rechristened Joey Shithead. Their first release laid it on the line; a four track EP, with the title cut “Disco Sucks,” notable for its memorable refrain “Disco sucks — like shit!”

“It became our passport to travel the world, because it got notoriety right away,” Keithley told me. D.O.A. continues today, with various lineup changes along the way. Shithead’s still present and accounted for though, and in his day job, he’s a city councilor for the city of Burnaby, B.C. (“I’m just using D.O.A.’s mantra: TALK – ACTION = 0 and applying it to politics,” he explained. “It’s been fun to get in there and kick some ass!”). But he found time to dig into the archives and put together a jim-dandy retrospective of D.O.A.’s early days.

Despite its title, 1978 actually covers more than just that year, with tracks from 1978 through 1982. “Disco Sucks” is there in all its primal glory (it really hasn’t aged a bit), along with the brooding “Woke Up Screaming” (a moderately paced number in stark contrast to the band’s usual thrash), the anti-cop “Royal Police,” and the anti-white supremacy “Nazi Training Camp.” D.O.A. had a clear political stance from the very beginning, with no holds barred attacks unleashed on tracks like “World War 3,” and the ebullient “Fucked Up Ronnie” (the latter making its point in one hundred and twenty one effervescent seconds). “Kill Kill, This is Pop,” from the cleverly titled 1979 compilation Vancouver Complication, lashes out against the capitalist monster with exuberant glee.

Half of the album’s tracks are previously unreleased demos. Early versions of great stuff like “No God, No War,” “Bored and Suicidal,” “Smash the State,” and “I Hate You.” Granted, the demos don’t tend to sound much different from the final versions, but they’re still nice to have, especially if you don’t have those early records to begin with. Two notable exceptions are “American the Beautiful” and “Liar for Hire,” which featured a different drummer on the final versions. The former song is not the anthem about spacious skies and amber waves of grain, but a number written in the dark shadow of the Reagan era, with lyrics worth quoting, because of their prescience:

Lock your doors, lock it tight

They wanna cleanse the home of the brave

For the master race of the USA

It wraps up with “Whatcha Gonna Do?” which, unlike most of the tracks, has a slower, almost reggae vibe. Perhaps because it’s a call to action, and it’s important that the words be clearly heard; act now, before it’s too late, the song implores. It echoes what Keithley refers to as D.O.A.’s mantra; talk gets you motivated, but it’s action that gets the job done. Words to live by.

(Click HERE to purchase and to get more info about the band.)