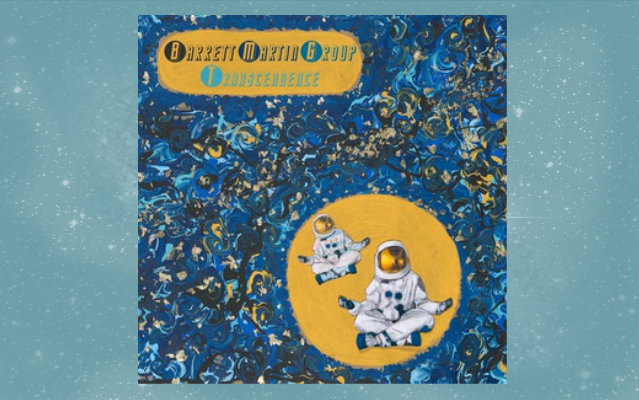 Barrett Martin might be the very definition of a renaissance man. It’s not enough that he’s a musician, composer, and producer. He’s also a writer and author (his memoir, The Singing Earth, came out last year), holds a master’s degree in Ethnology/Linguistics/Ethnomusicology, is an adjunct professor at Antioch University Seattle, and he’s been ordained as a Zen monk. Whew!

But music’s been his main beat, and hot on the heels of the recently released WP2 by Walking Papers, comes another album from his own outfit, the Barrett Martin Group. It’s 15 tracks of trippy instrumentals, with an array of guests dropping in and out, as if it’s an ongoing jam session at a party; read the credits and you’ll find such names as Peter Buck (R.E.M.), David Catching (Queens of the Stone Age), and jazz musician Wayne Horvitz, to name a few.

The album’s cover art makes it clear what the listener can expect. There’s two spacesuit-clad figures in a meditative pose, a mix-and-matching of the past and future; it’s a search for enlightenment, but with a modern touch. It’s a song cycle that opens, appropriately, with “Invocation,” a percussive piece that serves as a sort of overture. That segues easily into the second number, “Speak!,” at which time the melodic instruments come in; keyboards, guitars, bass, trumpets, saxophones. Those are the instruments that predominate throughout the rest of the album, a melodic base embellished with the percussive touch of claves, surdo drums, congas, gamelans, and sleigh bells.

Asked to give a shorthand description of Transcendence, you could get away with saying “jazz.” But there’s more going on here than that. There are elements of funk, soul, and world music as well. The first half is largely upbeat and breezy (great music to listen to as you drive), with the occasional hard edge (Catching’s guitar work in “The Asp”). But halfway through, Transcendence switches gears, slowing the pace down with more contemplative numbers like “Nebula” and “Rise & Rise.” “Listen!” serves as another demarcation point, being a short percussive track a la “Invocation,” ushering in the closing sequence of tracks, which aim to soothe, in contrast to the high energy of the album’s first half; numbers like “Arrival of the Queen,” “Moonfish,” and “Event Horizon” are the cool down after the workout. It’s a trip you’ll want to take again and again.

(Purchase ‘Transcendence’ at the Sunyata Records website HERE, where you can also sample the music.)