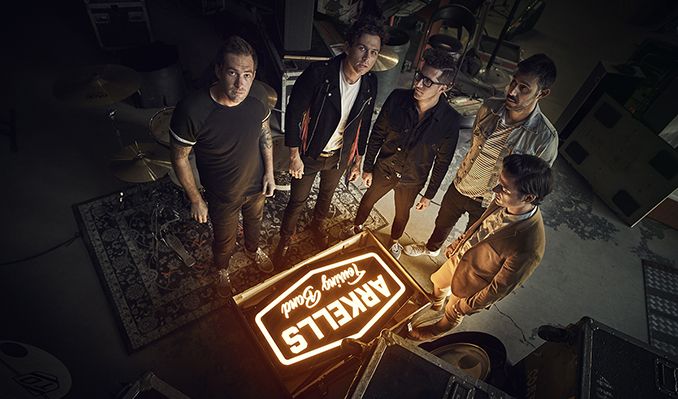 Arkells‘ fifth studio album Rally Cry is the band’s most pointedly powerful effort thus far. Long known for their exceptional songwriting and high-energy performances, the Hamilton, ON-based quintet — singer Max Kerman, guitarist Mike DeAngelis, bassist Nick Dika, keyboardist Anthony Carone, and drummer Tim Oxford — reveal on Rally Cry an unheard soulfulness that elevates their new songs to places that, while connected to a new approach, feel perfectly in tune with who the band is and always has been. Rally Cry has the size and scope to match Arkells’ ambition and ever-growing audience that love the band for the uniquely raw energy that is all their own.

Arkells have remained ever-present, relentlessly touring in support of their most recent album, Morning Report, which was extended by the surprise release of “Knocking At The Door” — the 14-week #1 smash, which became the most played alt-rock song of the year. The album yielded festival stops from Coachella to Lollapalooza, an unexpected viral trip to the Olympics in South Korea, and their show-stopping, stadium-filled hometown show “The Rally,” in front of 24,000 fans this summer.

“On our last album, we dipped our toes into the water, and learned that the boldest and most gratifying ideas were the ones where we took the biggest chances,” asserts Kerman. “That record emboldened us and gave us confidence to trust our instincts even more. On Rally Cry, we’ve risen to the challenge and we’re playing for keeps.”

Tickets to their forthcoming Chop Suey performance on March 30th can be purchased here.