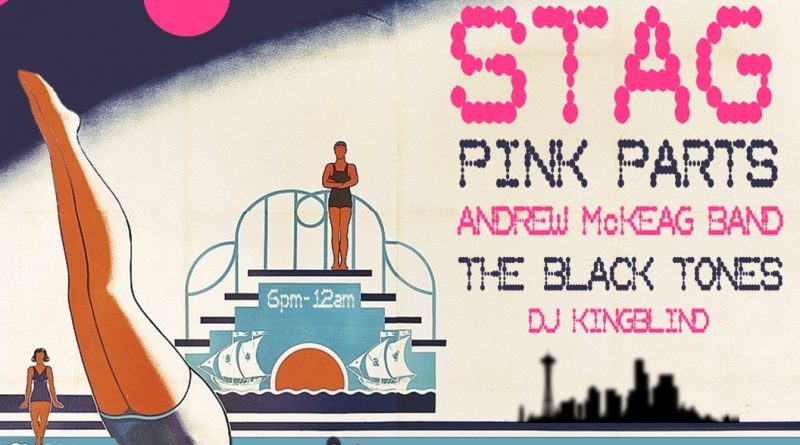 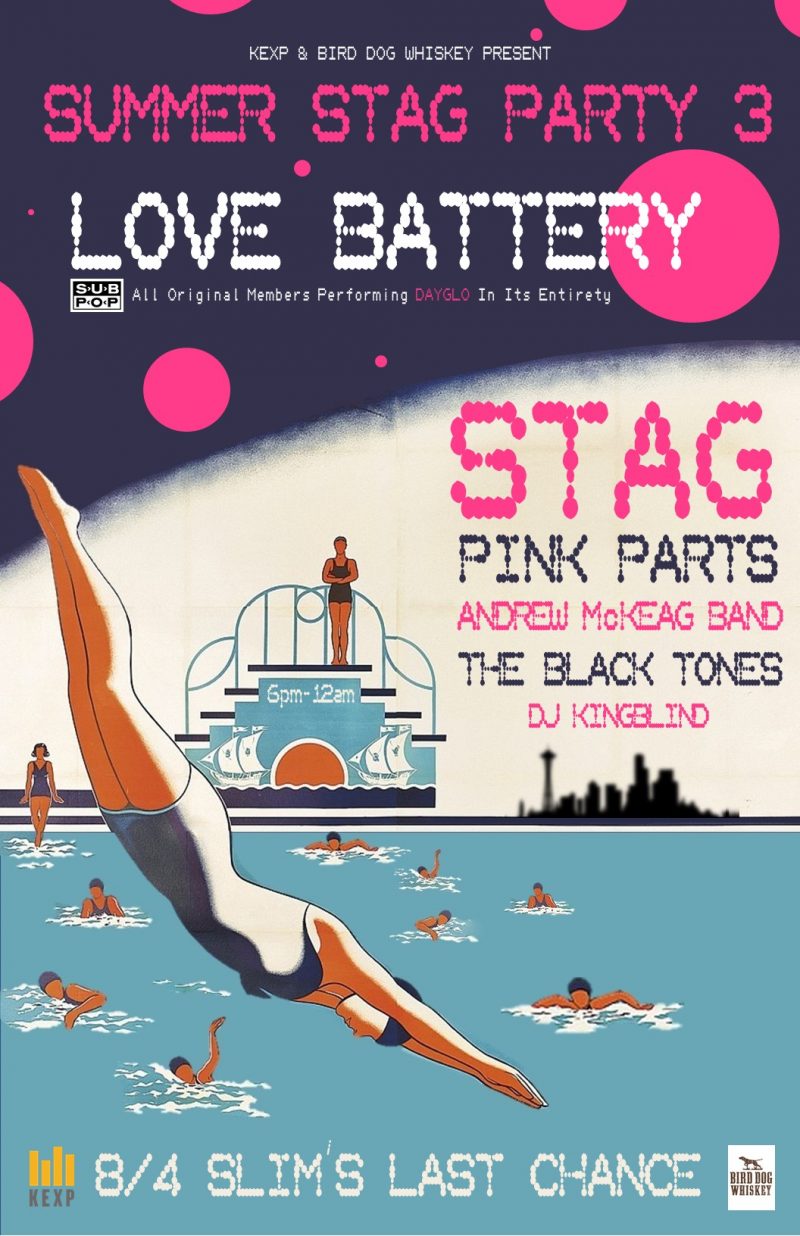 Seattle, WA, April 18, 2018, Seattle band Stag is gathering some of their favorite bands together for their 3rd annual Summer Stag Party. Stag are a Seattle based rock band that are coming off the release of their second album Midtown Sizzler, recorded by famed producer John Agnello (Dinosaur Jr., Waxahachie, Kurt Vile) and a recent tour of the UK. Pearl Jam’s Mike McCready released the bands Bedazzler 7” on his HockeyTalkter label in 2017.

“The Stag party is all about fun,” said Stag singer Steve Mack. “In a world of festival behemoths, we’re creating the ultimate micro-festival where you can see some amazing bands surrounded by 500 of your best friends.”

The 2018 installment of the Summer Stag Party features Seattle 90s favorites Love Battery who will be performing their second Sub Pop album Dayglo in its entirety. This will be the first time since 1993 that all four original members of the Dayglo lineup perform together. Singer guitarist Ron Nine and guitarist Kevin Whitworth will be joined by drummer Jason Finn (Presidents of the USA) and bassist Jim Tillman (U-Men). “The band is thrilled to be asked to revisit our Sub Pop release Dayglo” said guitarist Kevin Whitworth “which we feel captures the raw energy and mood of a certain time and place.”

Dayglo’s opening track “Out of Focus” was recently featured on MOJO Magazine’s Teen Spirit (Mojo Presents 15 Noise-Filled Classics From The American Underground Scene 1989-1992) alongside tracks by the Melvins, Afghan Whigs and Pavement.

In addition to Stag, other performers include Pink Parts who recently released their debut album recorded by Steve Fisk (Nirvana, Car Seat Headrest). City Arts Magazine said of the release: “Rock ’n roll is most relevant when those making it are both pissed-off and proud. Like the members of Pink Parts, who channel exhausted sarcasm and righteous rage into a raging debut LP.”

Andrew McKeag Band features Presidents of the USA guitarist Andrew McKeag. McKeag is a guitar hero we can all actually root for. His band distills the best of the 60s-70s rock without feeling like a nostalgia trip.

Seattle up and comers The Black Tones are a welcomed voice to the Seattle rock scene. Featuring twin siblings Eva Walker on guitar/vocals, Cedric Walker on drums, and Robbie Little on the bass, the Black Tones are quickly becoming a Seattle favorite. KEXP recently praised their work saying “with a mind for the delta blues and a deeply Northwestern-punk aggression, they’ve created a visceral and immediate sound that’s hard to not be invigorated by.”

The Show is presented by KEXP & Bird Dog Whisky

Stag: Seattle’s Stag present songs that are universally appealing and deceptively sunny featuring dark lyrics delivered with exhilarating guitars and pretty pop melodies that hook the imagination whether a listener is looking back or charging forward through life. Stag features singer Steve Mack, former lead vocalist of That Petrol Emotion, a highly praised UK band from the 80s and 90s who were a huge influence on bands like the Stone Roses, Radiohead and the Happy Mondays; guitarist Ben London (Alcohol Funnycar, Sanford Arms); bass player Pete Everett (Tuffy, The Mellors); drummer Rob Dent (Jackie on Acid); and guitarist John Randolph (The Cops). “crunchy power reminiscent of The Who and Cheap Trick.”– Don Yates, KEXP Music Director

Love Battery: Love Battery fell into the more psychedelic wing of Seattle grunge, adding a liberal dose of Beatlesque pop to the requisite hunks of mind-bending guitar fuzz. Formed in 1989, the band released a string of records for Sub Pop, Polygram and C/Z. One of the highlights was 1992’s Dayglo which showcased a tightened up focus and approach which was released to highly positive reviews. They signed to Polygram Records as part of the Grunge Goldrush but failed to reach the mainstream success of some of their peers. Recently there has been a resurgence of interest in the bands work and their last two Sub Pop albums Dayglo and Far Gone are now considered undiscovered classics.

The Black Tones: Simply put…The Black Tones are like a mixture of Kurt Cobain and cornbread. Consisting of founders/twin siblings Eva Walker on guitar/vocals, Cedric Walker on drums, and Robbie Little on the bass. Born and raised by first generation Seattleites, the Walker twin’s, honed their sound from their families original New Orleans roots, crediting them for their unique musical style of Rock ‘n Roll. A goody bag of BLUES, PUNK and BLACK POWER! Their debut album “Mr. Mines” was featured on the Seattle Public Library Playback series as one of 50 selected albums representative of the Seattle music scene.  Currently, The Black Tones are in the studio with legendary, Grammy-winning producer Jack Endino, hard at work on new material.