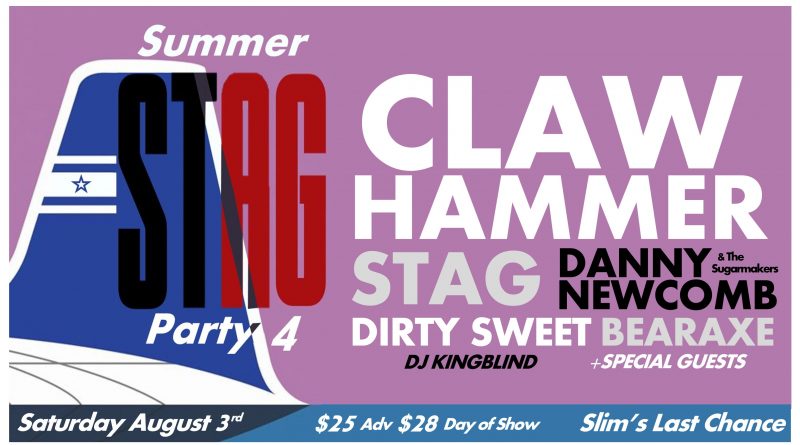 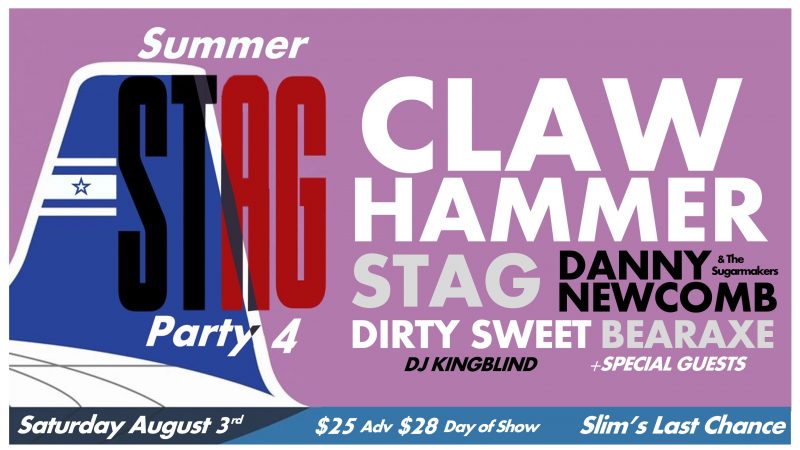 Seattle band Stag is gathering some of their favorite bands together for their 4th annual Summer Stag Party. Stag is a Seattle based rock band that is gearing up to release a new EP recorded by famed producer John Agnello (Dinosaur Jr., Waxahachie, Kurt Vile). Pearl Jam’s Mike McCready released the band’s “The Bedazzler” on 7 inch vinyl on his HockeyTalkter label in 2017.

“The Stag party has really come into its own over the last few years,” said Stag guitarist and festival organizer Ben London. “We get to curate some of our favorite bands and share a great party with 400 of our closest friends!”

The 2019 installment of the Summer Stag Party features Los Angeles blues/punk freak out arbiters Claw Hammer. This will be the band’s first Seattle show since 1997. “We recently reformed to do some dates with Mudhoney in Southern California” said drummer Bob Lee, “We jumped at the chance to play Seattle again. It was always one of our favorite cities to play back in the 90s”.

In addition to Stag, other performers include Danny Newcomb and the Sugarmakers who recently released their second album Steal the World recorded by Eric Corson (Long Winters, Perfume Genius). Northwest Music Scene said of the release: “Steal the World, carries a fierce, but earned wherewithal and unsurprising arsenal of talent courtesy of Newcomb and his band, the Sugarmakers.”

Dirty Sweet features Presidents of the USA guitarist Andrew McKeag. The San Diego based band rips, with a born-in-a-garage sound and an effortless Sunset Strip strut that also appreciates the rootsy side of the street.

Seattle up and comers BEARAXE are a welcomed voice to the Seattle rock scene. Featuring the bone shaking vocals of soul-singer Shaina Shepherd, BEARAXE is turning heads all over Seattle. They recently released a record recorded by Seattle legend Jack Endino. This band is not going to be playing small rooms for long. See them now while you have the chance!

The notorious DJ Kingblind will be spinning records all night!

Stag: Seattle’s Stag present songs that are universally appealing and deceptively sunny featuring dark lyrics delivered with exhilarating guitars and pretty pop melodies that hook the imagination whether a listener is looking back or charging forward through life. Stag features singer Steve Mack, former lead vocalist of That Petrol Emotion, a highly praised UK band from the 80s and 90s who were a huge influence on bands like the Stone Roses, Radiohead and the Happy Mondays; guitarist Ben London (Alcohol Funnycar, Sanford Arms); bass player Pete Everett (Tuffy, The Mellors); drummer Rob Dent (Jackie on Acid); and guitarist John Randolph (The Cops). “Crunchy power reminiscent of The Who and Cheap Trick.”– Don Yates, KEXP Music Director

Claw Hammer: Purveying a music squarely located at the more brutal end of the hardcore punk rock spectrum, Claw Hammer formed in Los Angeles, California, USA, in the mid-80s, taking their name from a Captain Beefheart lyric. Among their earliest releases was a track-by-track cover album cassette of Devo’s “Q: Are We Not Men? A: We Are Devo!” The band parlayed their blast of angst-ridden punk blues into records for Sympathy For The Record Industry, Epitaph Records and finally two records for Interscope Records. The band disbanded in the early 2000s, but recently reunited to play several shows with Seattle legends Mudhoney. This will be the band’s first Seattle show since 1997.

Danny Newcomb & the Sugarmakers: You got to believe when you play your first 3 chords on the guitar that something good is going to happen.  If something resonates, you’re in.  How far in depends on your temperament and volatility.  It started with a Japanese copy of an SG when he was 9 years old, learning Deep Purple songs, Rolling Stones songs and Aerosmith‘s “Toys in the Attic.”  Mike McCready lived 7 houses down the street, and they used to jam after school and watch tv and listen to music, while taking turns soloing.

It went from to basement rec room to Los Angeles, to Evergreen State College to More. Newcomb formed Goodness with former Hammerbox lead singer Carrie Akre. They sold 16,000 copies of their demo. They toured with Elliot Smith, signed with Atlantic records, played Madison Square Garden with Oasis, played with Cheap Trick, played in Vladivostok, Russia and toured some more. After Goodness slowed down, Newcomb focused on music as a solo artist.  This year, he’s releasing his third full length record! Wine is not the only thing that gets better with age!

Dirty Sweet: Dirty Sweet is an American rock band steeped in this nation’s musical roots, from country to R&B, gospel to classic rock and heavy metal to proto-grunge. A mixture of disparate influences such as The Rolling Stones, Belgian jazz guitarist Django Reinhardt and early U2 make them an interesting addition to today’s budding rock climate. The San Diego-based quintet’s name perfectly describes their two-pronged approach to writing and performing, what the NME calls “skuzzy, ass-shaking rawk ‘n’ roll” crossed with the ability to pick up their acoustic guitars and craft a melodic ballad. A review of SXSW festival said of Dirty Sweet’s performance – “Ryan Koontz gives you everything you need in a frontman, his commanding vocals matched by his shimmying and shaking across the stage.” This band rips, with a born-in-a-garage sound and an effortless Sunset Strip strut that also appreciates the rootsy side of the street. Most importantly, they have a damn good time up there, with their faces beaming as they assault you with a balls-to-the-walls approach. Just a fan-freaking-tastic rock band, keep an eye on them. The band now also features Presidents of the USA guitarist Andrew McKeag.

BEARAXE: Led Zeppelin meets Lead Belly. Rooted in prog-rock with a thunder of soul, Seattle band BEARAXE is a triumphant sweep of rebellion with a shot glass full of liberation. The band self identifies as a three piece and a biscuit, combining the bone shaking vocals of soul-singer Shaina Shepherd with an electrified fusion of funk, jazz and proto-punk. A multi-faceted vocal texture is paired with evocative guitar solos by Matthew Williams and heart-thumping jams by Jon Lemmon and Oz LaBrae. Their debut EP “Last Call” is an unapologetically chaotic story of Black Feminism produced by Grammy award winning, rock and roll legend Jack Endino. “Last Call” dives into the pain and pleasure of a self-inflicted party.