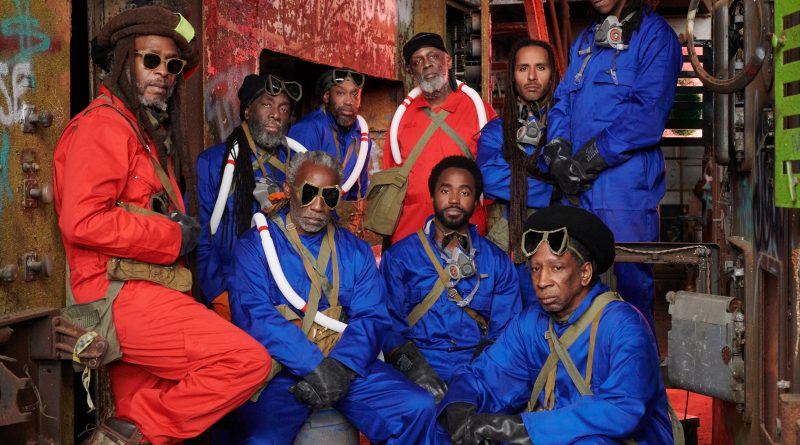 1975, folks.  If you feel old, how do you think I feel?  Steel Pulse has been in business since Gerald Ford (anyone remember him?).  The less things change, the more they stay. Well anyway, Steel Pulse is back with a new album, Mass Manipulation, and a gig in Tacoma on Saturday, July 27th, as part of the Reggae On The Way festival.  Rugged but unbowed, founding frontman David Hinds, mused on a few things for our benefit.

It’s been so many years touring of passing through Seattle that everything appears to be one big blur. However, I do recall pockets of incidents, like visiting that great big music museum it has. That became truly fixated in my mind, when it was able to display the history of reggae, featuring many a key players that had helped to develop the music, outside of Bob Marley. They even had us, from the British standpoint, featured.

Being a lover of museums and landmarks, Seattle tends to bring that pastime hobby out of me, more than most places in the USA. It was only four and a half years ago the band had ventured through, blogging our visit to The Hendrix Memorial, commemorating 45 years since his passing.

When in Seattle, it strikes me like I am not in the USA. There’s something cosmopolitan about the place, yet I cannot put my finger on it. That’s right! It, for some strange reason, gives me a European city vibe.

Also, I have this habit of associating historical events and famous people, with all the towns we hit in the States. So Seattle has my mind flashing on icons like Quincy Jones, Ray Charles, Hendrix of course, Nirvana, and Bruce Lee. Haha.  This place always strikes me as a peaceful and civilized town.

Watching cowboy movies back in the day, there was no gunslinging cowboys, or bank robberies in Seattle like how we saw it in other US towns like Kansas City, Wichita, Tucson, St Louis, Tulsa, Oklahoma City. Yes, American films do paint a vivid picture of its history.

Come to think of it, I have booked my flight to come in a few days earlier into Seattle, hoping I can at least get familiar with one more landmark.

My best moment for touring around the world varies from time to time, depending on what I am looking for and how I currently feel. But there is one place that has me reflecting on it once in a while, despite it being an awful long time since the band has performed there, and that is New Caledonia; a Melanesian island in the South Pacific. Not sure of the reason why I think of them. Maybe because I had witnessed their extensive efforts to hold on to their culture, defying European rule.  Oh yes, then there’s Ethiopia. The city of Lalabella, with all those churches carved out of the mountain side.

It’s hard to relay to you a “worst” moment because they were terrible experiences at the time, then the years roll by and it becomes part of one’s memoire and something to joke about. I say this because despite all the setbacks, there’s one thing that is paramount…. and that is to return to your loved ones, alive!

The world of reggae has been through a shitoad of transitions. Some for the better, and a good part for the worst. As time went by for us, we realised that the music played a very small part in regards to the direction it should be going. Industry politics became the rudder to this genre of music.

When reggae was first introduced to the world, it had a unique identity. The players were pure, focused and desperate to air their views of the struggle in our environment. It was organic, yet naive to the industry that would be advertising it around the globe. It was all about recognizing that it was not your neighbor that created your problem and impaired that quest for you to survive, but the establishment that you have been slaving for, night and day; believing in yourself that the trade off would be you being protected by them. So reggae music started to announce the ways the system have failed us, and for us to now stand up for our rights. To put it bluntly, “A War Was Declared On Babylon.”

Then other factors kicked in. Once the industry got hold of the music, it was now about who would go on to be the most successful playing it. And so it was prised out of the hands of the original creators, notably black artists, and into the hands of others who were hardly able to sing about hardships they had never experienced or encountered. Along with the subject matters changing hands, so did the energy and style that originally came with it. Case in point, bands like UB40 and The Police, got far more economical mileage out of it than all the black acts in the UK and Jamaica, put together… well, outside of Marley, of course.

But wisdom and patience takes the cake. Steel Pulse for one, has never held any resentment or bitterness towards the success of others, but sorted to head to the USA and other parts of Europe, like France and Holland, for refuge. Unfortunately, during this journey, the music collectively, was on the wane. There were many contributing factors for this of which it would take hours to explain. Therefore, I will make it real short.

Within Jamaica itself, the artist’s role within a band, drastically changed hands. Rapping DJ’s took the precedent over singers, the drum machine and electronic keyboards, took over the live-trap drums and bass. Political and spiritual subject matters became no longer relevant in the composing…. and that was where reggae started to go downhill. Then there were bands like ourselves that was scrambling to stay afloat in an industry that perpetuated the music that was quickly moving away from the authenticity that was introduced to the world initially. Today, the whole process that took place over a 35-year period has now come 360 degrees. The younger Jamaican acts are back on path now with conscious lyrics and character….

But there is one thing still lacking, and that’s the comradeship to make a four, five, or six-piece ensemble sit down together and write music benefiting each other. Today, for the most part, the acts coming out of Jamaica are solo artists. So this is where reggae from the rest of the world slips in.

All other nations, especially here in the USA, have adopted the old school of production featuring bands, as opposed to one guy on stage with a backing band. I believe as well as a color thing, that the people that love reggae music across the world subconsciously know the differences in types and styles of musical production. The reggae lovers, no doubt will not be familiar with all the technical jargon when it comes to building music, but I believe they can sense the sincerity in how it has been packaged and presented to them.

In the USA for example, the most successful reggae bands are white, not black… this is where politics “run tings” as we would say in Jamaica. However, I can proclaim that these successful white bands have treated this thing as a business and me chilling out with most of them, I see that they have deep admiration for the original creators of yesteryear. For me, if the music needs to grow and stay alive, it has to be interpreted by all, across the globe. After all, reggae’s primary goal is about the unification of mankind… the “overstanding” of each other’s culture. Jah will be the one to make the decisions.

Trump?… Brexit?… what’s the difference? Like I said, we have all gone 360 degrees; exactly where we left off 50 years ago when segregation and apartheid were the solutions to everything. As it stands, over the past 50 years people of color and of diverse cultures have multiplied one hundred fold… the problem that the system now faces is that the people are refusing to remain prisoners of geography. The change of superpowers are imminent.

In regards to lyrical themes, I sum it up with this alliteration:  Poverty, Protest, Peace, Prosperity, Prediction, Prophecy, Politics, Prejudice and Police brutality.

[On the new album:] The world recorded this album… it has the been the first album that we have ever recorded in so many different cities in the world. To begin with, there were at least three towns in Martinique alone, at least four cities in the USA, Jamaica, UK, the list goes on. It was a ‘papa was a rolling stone’ kinda thang. Myself and co-producers Sidney Mills and David Elecciri, were deeply involved.

I am proud of all the songs. Every song that I felt was short of the mark, I honed in on it and asked myself why I was feeling that negative way about it. But if you insist [on me picking a favorite song] then I think “Black and White Oppressors” gets the prize. “No Satan Side” would be the runner-up because of how passionate I am to get its message across. I don’t take Africa being disenfranchised, lightly.

It’s not only Rastafarianism that Americans have a misunderstanding of. Americans collectively were never pruned or groomed to learn of other cultures across the planet. Whilst growing up in England, we did.  It was an integral part of our schools curriculum. Case in point, a Sikh Indian was murdered in Arizona shortly after the 9/11 incident. Because that act of terrorism, he was murdered by bigots, believing he was part of the Islamic group accused of that terrible act on the World Trade Centre.

Now, if one knows about religion and cultures, one would not come to that conclusion, especially armed with the knowledge that a Sikh Indian and a Muslim are virtually arch enemies. So there goes a man murdered by thugs for resembling a culture that has a history of contention with the Sikhs, all because he was wearing a turban.

So, my take is that in order for America to rid itself of biases and bigotry, there needs to be courses introduced into the schools that help the citizen to be more aware of other nation’s plights, hardships, and religious attributes. In regards to Rasta, it will be forever misconstrued to be a marijuana let’s get high thing. Believe me, there’s more to Rasta than that.

The future…. hmmmm. To begin with touring on this 17-track album will be extensive. I know we will be that much in demand. During this process, of which I estimate to be a good two years, we hope to be releasing the dub version of the album and maybe an acoustic tour, too.

I would love to know that this leg of my career steers me into movie acting and appearances for charitable causes. I am totally aware that my parts will be limited because of my dreads, but I am sure Hollywood can think of something. Yes, put me out there as “Captain Africa,” who knows…