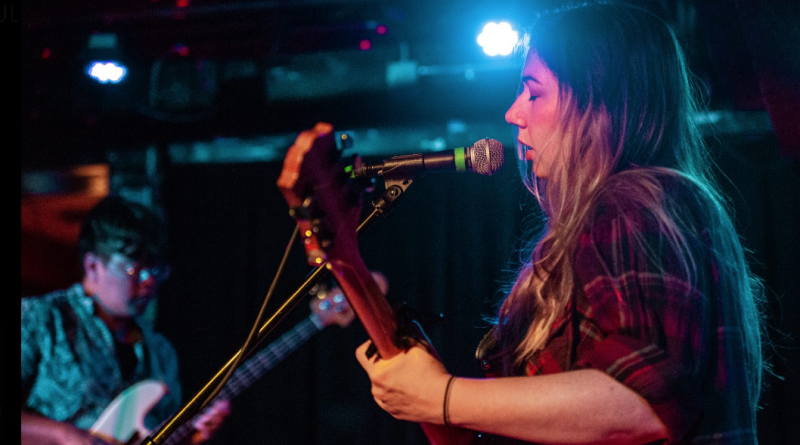 Premiering today on Northwest Music Scene is the new video for “I Tangled With The Serpent” from Temple Canyon.

“Mariko’s rich and vibrant vocals conjure up favorable comparisons to the Wilson sisters and Stevie Nicks. She winds through the song, at times more delicate and reflective, but mostly emotive and powerful … supported by a woven web of sharp guitar lines that tangle with and slide away from her exclamations, a shadowy bass line, steady, echoed drum pummel, and sporadic cymbals hits.” –The Big Takeover

The new full-length Temple Canyon album Fortress, spans genres and eras whilst maintaining a consistent sonic current. As if on an episode of The Wonder Years, lead singer and songwriter Mariko Ruhle shares highly relatable stories of where we come from – the love, the loss, the surreality of our innermost thoughts and feelings, the nostalgia – all tightly contained in a comforting ten-song package. The first single from Fortress is the hook-filled and resonant “I Tangled With The Serpent,” which covers perhaps the most intense of the album’s subject matter. “It deals with the rampant physical and emotional abuse so many are experiencing and healing from,” Mariko says. Masked in a brightly pulsating, “Nashville”-inspired arrangement, it converts a horror story into an anthemic fight song that calls into mind classics like “Eye Of The Tiger.” The song anchors the dark and light moods and tones that Temple Canyon continuously balance, one song at a time. Like many of the songs from Fortress, “I Tangled With The Serpent” leaves the listener with a lot to interpret. “My role in the song is the witness,” says Mariko. “I was intentionally very cryptic when writing this. I was struggling with how to process my own experience, without divulging a story that is not mine to tell. For me the serpent is a woman afflicted by her own trauma to the extent that she is paralyzed and blind to her own trespasses. She is the character that you can’t help but empathize with despite having a conflicted moral sensibility.” Of course, the song can be interpreted many different ways. The conversational lines are transportive, taking the listener into their own story, making the twisted imagery that much more visceral and physically jolting. The clarity of musical direction and confidence in the emotional power of this song is what pushed Temple Canyon to pull the trigger and start recording Fortress in the first place.

Fortress will be out August 23rd on MADKIN RECORDS. Temple Canyon will be having their vinyl record release party at Sunset Tavern on Saturday, August 24th with Lonely Mountain Lovers & Afterlife Giftshop, followed by a West Coast tour in September – thirteen dates in two weeks between Seattle and Los Angeles.

(Check out “I Tangled With The Serpent” below via YouTube and get more info about Temple Canyon HERE.)