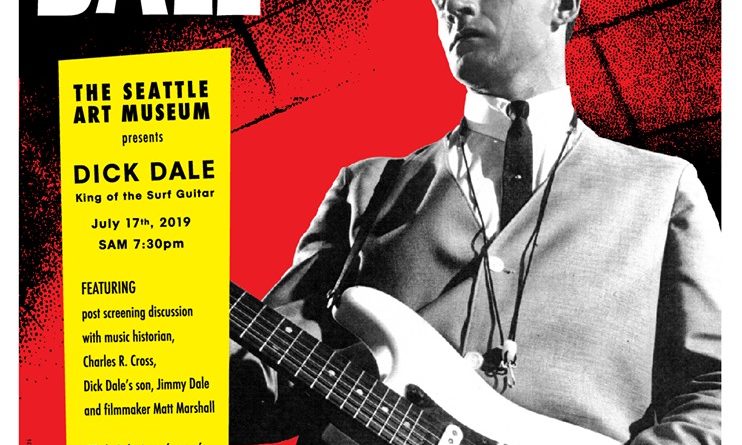 “Dick [Dale] was an absolute joy to watch onstage. As with Link Wray, it’s just unbelievable he is not in the Rock And Roll Hall of Fame.

I’m not a guitar player, but my guitar player friends always point out that Dale’s style sounds or looks simple when it is anything but: it was layered. He basically played rhythm and lead in the same song, and used his Fender to create vibrations and feedback, which give it that distinctive ‘twang,’ which is why the line between surf music and rockabilly, is a thin one. It’s also why a song like “Misirlou” is almost impossible to nail correctly. If Dick Dale hadn’t already existed–which of course he did–you could almost see him as a character in a Quentin Tarantino film, rather than the person who made the soundtrack to Tarantino’s signature film.”

That’s Charles R. Cross, longtime Seattle rock writer and former editor of The Rocket, on the life and legacy of surf guitar maven Richard Anthony Monsour, known to the world as Dick Dale (1937-2019). Dale, who pioneered surf guitar in the early ‘60s with his command of tone, speed, inflection, and yes, the everpresent twang.  Rediscovered in the wake of his signature tune “Misirlou” (his adaptation of an old Mediterranean standard) in Quentin Tarantino’s Pulp Fiction, he toured the world, fighting age, disease, and everyday hassles.

Cross will be on hand for a screening of the new feature documentary Dick Dale: King of the Surf Guitar, directed by Seattle resident and longtime Dale manager Matt Marshall. The film plays one night only, Wednesday, July 17th, 7:30 pm, at the Seattle Art Museum. Marshall was kind enough to take some questions, and Dale’s son Jimmy, who often played with his father, also shared some stories.

From Matt Marshall, Dick Dale:  King of the Surf Guitar:

NWMS: How long have you lived in Seattle, and what neighborhoods have you called home?

Matt Marshall:  I was born in Great Falls, Montana. We moved to Seattle when I was two. My paternal great, great grandparents moved to the Madison valley in 1909 and Portland, Oregon.

NWMS:  What were your first impressions of Dick Dale’s Which songs
and albums did you hear first?

Matt Marshall:  Roy McCready introduced me to Dick Dale and the Deltones.  “Misirlou,” “Nitro,” and “Esperanza” were the first songs I heard. The Surfers’ Choice album was a major hook for me.

Matt Marshall:  I managed Dick Dale for a dozen or so years. I saw hundreds of shows during that time. He was in his element on stage as compared to the studio. One of the first shows I caught was his 1997 mural stage performance at Bumbershoot. Hundreds of decibels piercing the air.

There were so many highlights. Dick often played the same bill with wide variety of musicians. Among the most interesting was the Royal Festival Hall show with The Fall–thanks to John Peel. I recall seeing Paul McCartney backstage at that one. His son Jimmy is carrying on the tradition.

NWMS:  How did your impressions of the man’s music grow and change over time?

Matt Marshall:  He slimmed his show towards the end. It was pure rock and roll; guitar, bass and drums. 90 minutes of some the best guitar sounds in the world. I was fortunate to play a major role –along with Dick’s attorney, Malcolm Wiseman — reissuing Dick’s Capitol Records recordings from the early to mid-1960s. It was an incredible education to navigate through all of the recordings with Dick–and to work with the great Bob Irwin and his team at Sundazed.

NWMS:  What are the most important aspects of what Dale played, in terms of both underlying value, and influence to other musicians?

Matt Marshall:  Many people shared their stories with me of how Dick Dale was the father of loud playing. His relationship with Leo Fender is legendary. Whatever your taste, the Showman Amps played a large role in early rock. From Buddy Miles to Bruce Springsteen to Leo Fender’s widow, Phyllis, they have all made it clear Dick Dale played a pivotal role in rock and roll.

NWMS:  What lead you to make a film on Dale?  Had you shot movies before?  If so, what, where, and how?

Matt Marshall:  I studied filmmaking in Montana and ran a production company in Bozeman for a few years with one of my professors. I flew to London to shoot a Dick Dale/John Peel Session at the BBC. I ended up filming Dick throughout Europe for 14 days. That turned into 12 years as his manager.

NWMS:  What are your favorite films about music and/or musicians? How did those films influence your approach here?

Matt Marshall:  The Maysles brothers films Salesman and Grey Gardens got me going. Getting to work with Richard Leacock, who worked on Monterey Pop and Primary helped to cement my interest in documentary filmmaking.

NWMS:  What were the most difficult aspects of completing the film, and how did you work through those?

Matt Marshall:  You have to be driven to conceive, capture and complete a film, let alone find distribution. It remains the single most interesting art form, for me.

NWMS:  Who financed the film?

Matt Marshall:  It was a passion project. Anytime I had a spare moment, I would pull a camera out or another recording device to capture Dick Dale.

NWMS:  What kind of cooperation were you able to get from Dale’s family?

Matt Marshall:  Dick and his family were fully onboard. Dick;s father Jim Monsour, who managed Dick at the start of his career, also participated before his passing. What I constructed is really a father-son story set during the first years of rock and roll in Southern California.

NWMS:  When will the film open wide?

Matt Marshall:  Dick Dale’s son, Jimmy, and I are working on that. To be continued… 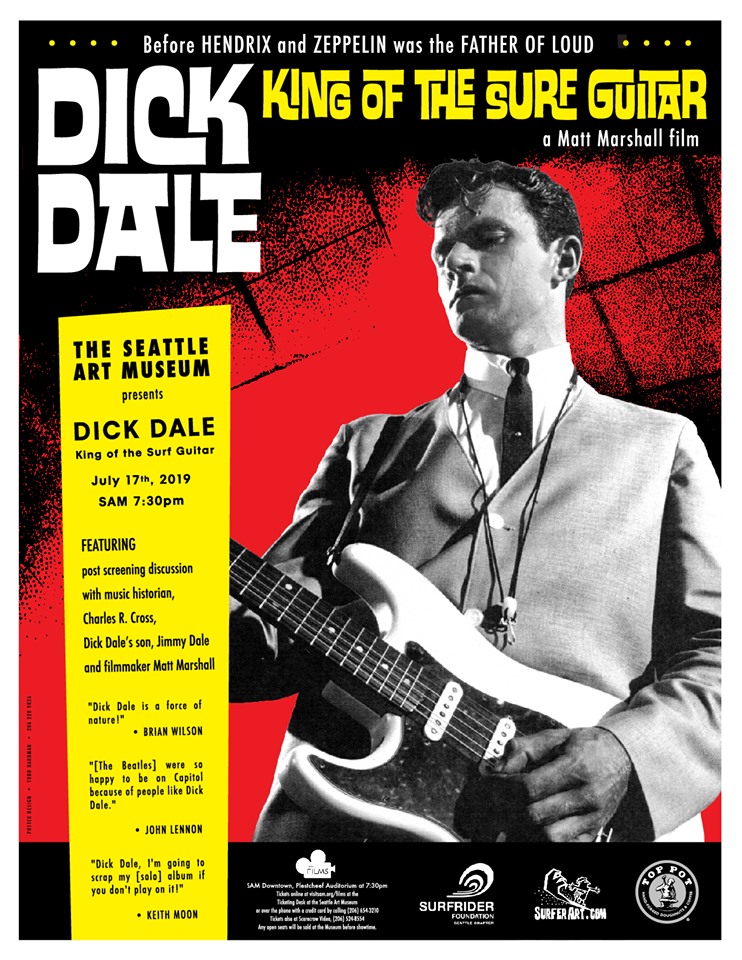 …and, some memories from Jimmy Dale, Dick Dale’s son and frequent bandmate on drums and/or guitar:

NWMS:  What are your earliest memories of your father, from when you were young?

Jimmy Dale:  Probably being back stage and hugging him with my Mom, Jill, before he goes on. Vividly the headband, pony tail, leather coat and most of all the smell of his Chaps cologne.

NWMS:  When did you figure out that your father didn’t exactly have a normal
job, or a normal life?

Jimmy Dale:  I can’t really answer that clearly. I always knew as far back as I can remember, but I think it really hit me when he started teaching me how to play so I could do what he did.

Jimmy Dale:  Well from what I hear from the people who were around as I grew up, I started tonguing basic drum rhythms before I could talk. “Dat dat, dah. Dat dat, dah.”  They’d sit me on a drum set while they were breaking down and I’d make some kind of recognizable beat alternating arms.

Then second grade talent show.  My dad drilled me to learn drums to back him, with my mom on bass. It was intense…then around third or fourth grade he started teaching me guitar.  Around fifth/six grade I was joining him on stage for both acoustic and electric.

NWMS:  What are the best and worst stories of playing with your father?

Jimmy Dale: Worst? Although there’s a few, ha ha, I would say one of my most disliked moments was him making me sing “You Are My Sunshine” in front of all my friends in elementary school.

Best? I’d say one of them would be finally playing drums for him full-time. Being a part of the show I grew up hearing from countless green rooms.

The satisfaction told me it was where I was meant to be. That felt like nothing else.

NWMS:  Thoughts on the finished film?

Jimmy Dale: I will be seeing the film here in a few days and will get back to you on that one!