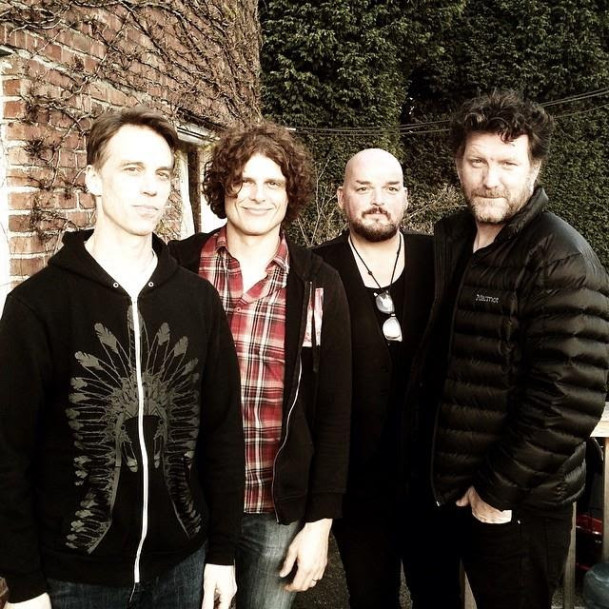 Listen to “Staring Down the Dust” HERE.

“This was the first song we recorded and we finished the rhythm track very quickly. We all liked the sound and feel of the song, but once we heard Mark Lanegan’s vocals on it, he took it to another level completely.” – Matt Cameron

“I was already blown away to be in this band. So much music that influenced me came from Seattle. When I heard Lanegan was going to sing on the track I thought, ‘Ok, well it just doesn’t get more badass.’ The riffs Ben came up with for this one are heavy and twisted… not an obvious pocket for a singer to jump into. I was amazed when I heard it and honored to have stomped on a dusty Big Muff.” – Dimitri Coats

About ​Ten Commandos​
Ten Commandos started early August 2008 after a conversation between Matt Cameron (Soundgarden, Pearl Jam) and Alain Johannes (Eleven, Queens of the Stone Age) following a memorial concert for Natasha Shneider (Eleven). Alain had the idea to write and record songs using Matt and Ben Shepherd (Soundgarden, Hater) as the rhythm section. The three convened in Seattle in late 2008 and for 7 days and wrote the bulk of the record. Matt and Alain’s schedules cleared up enough in the spring of 2014 to finally finish the songs in Seattle. With the addition of Dimitri Coats (OFF!, Burning Brides) on guitar, the band entered famed Studio Litho with engineer Don Gunn. In the summer of 2014, the band finished recording at studio 11ad in Hollywood CA. All members contributed in the writing of the record. Guest musicians include Mark Lanegan (“Staring Down the Dust”), Nikka Costa (“Come”) and legendary guitarist Peter Frampton (“Sketch 9”).