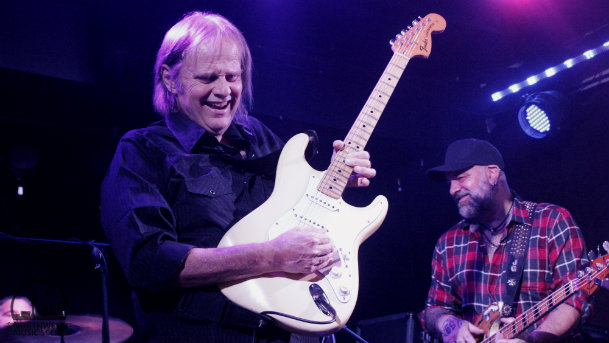 I’m a huge blues fan. I’m also a huge Walter Trout fan, thanks in part to northwest guitar legend Dudley Taft.  Several years ago, although I’d always loved the blues, Dudley drug me with him as he went back to school on the blues. What happened was I discovered a lot of amazing guitar players that had somehow slipped by me before and Walter was certainly one of them. When I first heard him I was blown away at his guitar wizardry and I was hooked instantly.

I dove deeper into his history and saw that he’d played with names I recognized like John Lee Hooker, Canned Heat, Percy Mayfield and John Mayall’s Bluesbreakers. I’ve always been a huge fan of guitarists that completely own the venue when they are on stage and I’d place Walter in a very elite group of best guitarists in the world. Of course being in the blues probably doesn’t get him the respect his playing deserves on the world stage but he’s happy with the niche his shredding has carved out. He has a solid fanbase of fans that know just how badass he is and like Walter says when a new fan says something like “Where did this guy come from”, his reply is something like, “I’ve been here, where have you been?”.

The great Walter Trout showed up at Tacoma’s premier spot, Jazzbones for a much anticipated northwest return to a stage that has felt the fire of his guitar many times over the years. Walter looked fantastic and he told me backstage before the show that he hasn’t felt this good in years. It showed too because he stood for the whole show except for a few minutes while Michael Leasure tortured the skins later on in the show during an epic drum solo.

Now let’s be clear, yes Walter Trout is a blues musician. He can play the blues with the best of them but if you think blues is boring, you and I are not thinking about the same thing. Walter and and his band ripped and shredded the Jazzbones stage, while the audience stood there with their collective jaws on the floor. At times, Walter brought his son Jon Trout up on stage to do some of his own shredding and make no mistake about it, the younger Trout can throw down bigtime. Also, 1000 bonus points to Jon Trout for wearing a Lamb Of God t-shirt while playing guitar at a blues show.

You may have heard a few years ago Walter got very sick. In fact it’s a miracle that he was even on stage last night because although though he’d been clean and sober for decades, his early days of addiction caused a lot of wear and tear on his liver.  In early 2014 Walter made it public that he was dying and that he would certainly be dead if he didn’t get a liver transplant. All other methods had failed to heal his ailing body and a transplant was the only thing left. As a result of the liver problems he lost 120 pounds but with fierce determination and an amazing army of support, over a quarter million dollars was raised to give him another shot at life. The blues world rallied around Walter almost non-stop until the money was raised and a suitable liver was found. So for me watching Walter last night was the end result what can happen if enough people come together.  Just incredible.

This is a good time to mention the organ donation saves lives, Walter Trout is living proof of that. Please become an organ donor HERE.

BTW, I mentioned that Walter stood for the whole Jazzbones show, that was in stark contrast to the last time I saw him, which was in  in Santa Ana, CA in September of 2013, where he played most of the show seated. He’d lost a lot of weight and didn’t have the energy to stand for much of that show. I mean he still killed it on the guitar and I’m sure he wanted to be on his feet, he just couldn’t. So based on that alone I could tell he is truly all the way back, and then some.

A few years ago Walter revealed to me in an interview that Carlos Santana helped him get sober back in the 80’s while Walter was playing with the British blues master John Mayall.  After seeing Trout’s potential and what he was doing to himself, Carlos took Trout off to the side and gave him some pointers and the advice stuck, resulting in Trout’s continuous sobriety.  Last night, Walter played a crowd favorite aptly named “Marie’s Mood” which is an instrumental ode to his wife Marie, his family and although he didn’t say it, the song is definitely heavily influenced by Santana, at least in terms of style and guitar tone. Walter’s version of that song at Jazzbones on Friday night had the capacity crowd gently swaying back and forth to the tasteful six-string mastery that was coming from the stage. Definitely one of the highlights of the night.

The band was extremely tight and ripped through a setlist that included a few songs from Walter’s upcoming release(Oct. 23) ‘Battle Scars’, a few from ‘The Blues Came Calling’ which was written while he was very ill. Walter told me that album is hard for him to listen to because he didn’t feel it’s his best work but I told him “Jesus Christ dude you were literally on your death bed, I think the album is awesome”.  Which it is. Friday’s show also included “I’m Back” from his 2013 release called ‘Luther’s Blues’, a tribute to the late, great Chicago bluesman Luther Allison.

Adding extra flair on the bass was a Swedish born fella by the name of Johnny “Blackout” Griparic who has quite an impressive resume that includes Slash’s Snakepit, Richie Kotzen and many others. He told me before the show that he, like so many others, got his start playing the blues and after seeing him on stage with The Radicals it’s pretty clear he’s having a blast with these guys. Oh yeah, he is a total badass on the bass too! And no Walter Trout show would be complete without Sammy Avila who has been killing it on the keyboards with Walter Trout since 2001. Sammy brought his “A” game as well and delivered a spirited and delicious performance all through the night.

The main part of the show ended with an epic guitar showdown between Walter and his son Jon. They stood center stage and traded licks as the crowd looked on with amazement again. After several minutes they gracefully left the stage to a standing ovation but the deafening chants and cheers for an encore were not going to stop until the band came back.

And come back they did. Walter began the encore with his road-worn Fender Strat plugged straight into his Mesa Boogie amp(no pedal boards required) like he did all night long. As his hands effortlessly floated up and down the fretboard, delivering harmonics and killer tone, all of a sudden Walter Trout and The Radicals pushed the gas pedal to the floor, cranked it to 11 and tore into one of the most awesome versions of the Freddie King classic “Going Down” you will ever hear in your life. Game. Set. Match.

This was Walter’s first return to the northwest since the liver transplant and he is indeed back. Welcome back friend.