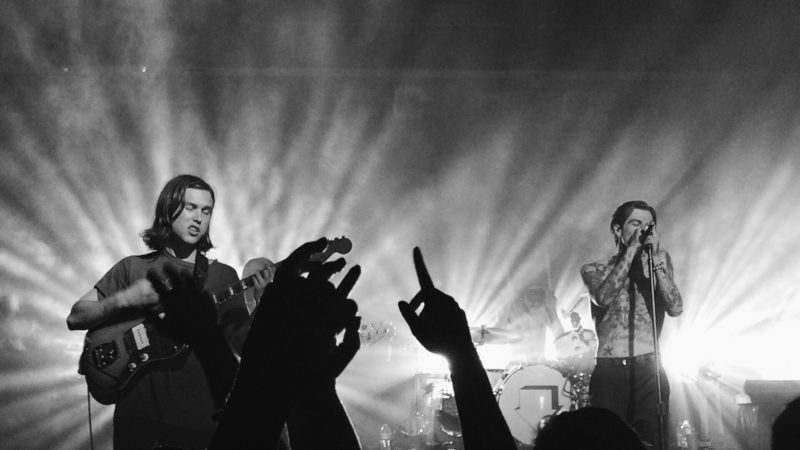 Scorching hot. Sweaty. Crowded. All words that accurately describe the crowd packed into the sold out Showbox SoDo for The Neighbourhood.

But first, the opener — EMI, straight out of Seattle. Her sound fit well with The Neighbourhood, with similar beats and feels to the songs. Her set definitely got the crowd going and pumped up, but that’s about it. Her set wasn’t incredible, it sounded like basic SoundCloud music, and there’s absolutely nothing wrong with that, it’s a great start, but that’s all it is: a start.

The Neighbourhood has a sound which they’ve described as “happy music for sad people,” and combines genres like indie pop, hip-hop, and R&B. Their latest album, Wiped Out!, features a number of tracks with calming sounds from the beach in the background or in the intros and closings of songs, displaying their California pride. The band is known for their exclusive black and white theme within their clothes, music videos, and album covers, offering some consistency as they experiment and change around their sound.

Suddenly flashing the stage lights on fifteen minutes before the opening band’s set is not a great idea. Everyone rushed forward and the density of people in the pit doubled as they tried not to completely squish the people in front of them or lose their friends. When the band actually came on stage around nine, the same happened, but by that point no one really cared. The band opened with their second most popular song, “Afraid,” which peaked at #4 on US alternative charts, and everyone started jumping and throwing their arms around. The whole show somehow manages to have a very California vibe to it. Maybe it was from the vocal effects on the mics, maybe it was the instrumentation, maybe it was even just the way the lead singer Jesse danced and moved around the stage.

The Neighbourhood is a band that has a much greater intensity when they’re live. Their songs gain so much meaning when Jesse sings, and his vocal improv always drives the crowd wild. The improv is actually what I think really sets their live performance apart from their their recorded albums. While the songs on the album are pretty great, hearing Jesse add more weight to some lyrics and put in little screams makes the songs really passionate. One of the most popular songs from the new album, “Daddy Issues,” has a really low-key R&B vibe to it, which led the crowd to grind on whomever was around them as the shouted the lyrics back. Highlights of the show definitely included the crowd’s reaction as Jesse took his shirt off, and when someone threw a bra on stage, which he proudly hung on his mic stand.

Overall, the show was enjoyable, but in that specific venue, the band had a lot of potential that wasn’t quite fulfilled. Even with a sold-out show, the venue’s capacity is only around 1,000 people. The band didn’t say much to the crowd other than, “We’re The Neighbourhood,” and, “Thanks for coming.” In a venue that small, it wouldn’t have been hard for them to be significantly more intimate with the crowd, and interact with them more, and I feel like that would’ve made the show a lot better. Furthermore, although he was the lead singer, Jesse was pretty much the only one who was lit by the stage lights, the rest of the band was mostly left in the dark.

The most interaction the crowd got with the rest of the band was guitarist Zach coming a tad closer to the crowd for a small section of one song, and Jesse occasionally pointing to the crowd and reaching his hands toward them. If you were a new fan, The Neighbourhood could be easily mistaken as a single artist with his tour members up on stage that night. However, I think the quality of the performance outshines the missed opportunities, and it was still a great performance.

Though there could have been more crowd interaction and intimacy between the band and their fans, I think the performance, as well as the added intensity and passion of the songs, made the show worth the wait and anticipation.