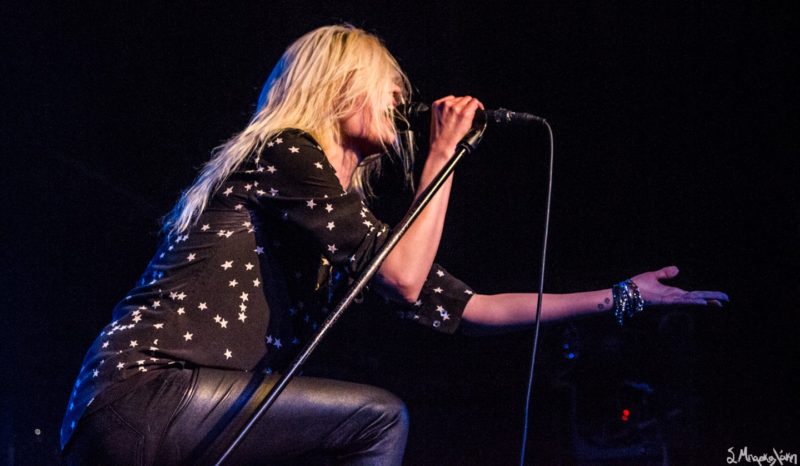 I’ve been waiting to see The Kills live ever since I discovered Alison Mosshart’s voice on Placebo’s Meds in 2006. I’d never heard of them before, but soon after became a fan, as they fed my punk rock obsession. Alison and Jamie Hince formed as VV and Hotel and began writing together while she still lived in Florida, but soon after, decided to officially move to the UK.  They began introducing their songs in 2001, releasing their debut album Keep on Your Mean Side in 2003 as The Kills.  It was time to finally catch them at Showbox SoDo a couple days before the release of their fifth record Ash & Ice. They’ve been on tour all over the states, and received big buzz for their Coachella performance in early April.

The night started with all-girl trio L.A. Witch, whose sound is reminiscent of post-punk blues, with the seductive voice of Sade Sanchez leading the way. Drummer Ellie English plays intensely as Irita Pai sets the mood with her heavy basslines. Their latest record Drive Your Car will remind you of a time you enjoyed listening to an invite-only show at a friend’s basement.

The Kills took the stage shortly after 10, beginning their set with “No Wow” as fans screamed and jumped around in excitement. Mosshart didn’t waste any time getting into it, as she began her hair flips within a few seconds, pumping herself and everyone else up in the venue. Hince started his power guitar riffs, fueling her fire throughout the night, perfectly emphasizing their artistic chemistry.

Mosshart mostly stood on the left side of the stage, focusing on her vocals but joined in by playing the guitar and drums a few times. She did grab her red solo cup and had a drink as she walked between the front and back of the setup while Hince played longer guitar solos. They played most of my favorites, “Kissy Kissy,” the newer “Hard Habit to Break,” “Doing it to Death,” as the duo exploded with energy before ending the regular set with “Pots and Pans” and “Monkey 23.”

When the regular set was over, they turned to each other and hugged, as Alison gave Jamie a kiss on the cheek, which was one of the sweetest things I’ve seen at a concert. They came back for an encore with “Tape Song,” “Siberian Nights,” “Fried My Little Brains,” and ended with “Sour Cherry.” This is a band you must catch live if you’re up for a good punk rock show that will keep you moving the entire time.