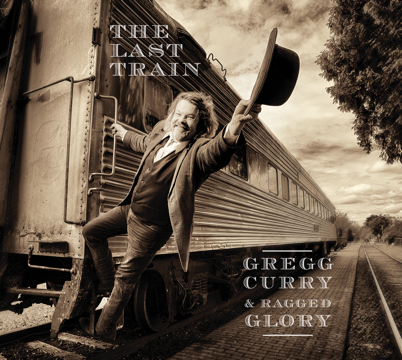 When Gregg Curry emigrated to the Northwest from Alabama he brought along a satchel of songs and southern charm to the safe confines of Vashon Island and found like-minded souls to form a new band Gregg Curry & Ragged Glory. The seven-piece ensemble delivers raw, energized roots rock, alt country and Americana. Curry and Co. teamed up with acclaimed producer, engineer and musical guru Martin Feveyear to record their second full length album, The Last Train, set for release in October of 2017. The 11-song collection reflects the breadth of Curry’s songwriting skills and showcases the many talents of Ragged Glory.

Opening track “I’m Moving,” is a four on the floor rocker that features Curry’s long-time partner in crime guitarist Rick Dahms and hot harmonica from Michael J. Nichols who recently joined the group along with new bass man Michael David Marcus and drummer Emory Miedema-Boyajian. The mood downshifts to an easy alt-country swing for the study of introspection “The Road To Regret,” drawing comparisons to Graham Parsons, followed by the bluesy stomp of the title track “The Last Train.”  More of Curry’s influences are revealed on the rapid fire two beat “Free Ain’t Bad,’ when he poses the question “does Patsy Cline make you cry, do the Stones get you high.” The straight-ahead roots rocker “There’s Only You,” is a rambling tale of righteous love, that rolls right into the CCR styled swamper “Fire Can’t be far Away,” while the sweetly waltzing “Bayou Moon,” transports us to the French quarter with loving flair from soaring horns and Spanish guitar.

Curry looks back at the heyday of his heroes that are now aging rockers who deserve respect on “A Long Way From The Whiskey.”  Rebekah Kuzma joins Curry for the political lament “Birds & Stones,” a song Curry describes as one he “was tired of not having recorded, because the world needs it.” The acoustic duet comes straight from the Pete Seeger playbook with a direct message about the folly of foolish men. Curry then draws from his own life journey and the landscapes he has traveled and the lessons learned on the road on the expansive “Long Way To Here.”  The album ends by going to “Infinity,” for the final rocking track, a six-minute southern rock jam inspired by the many outlaws who picked up a guitar and blazed a trail for Ragged Glory.

(Get more info about Gregg Curry and Ragged Glory on their website HERE.)