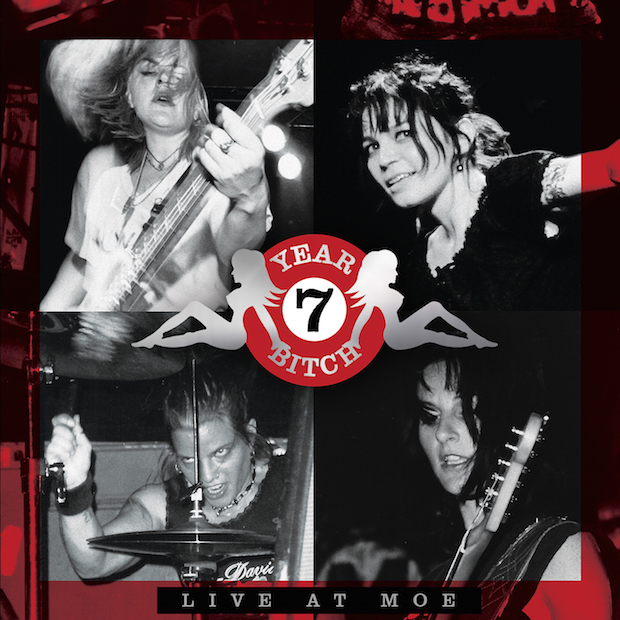 One evening in 1996, 7 Year Bitch played what would be one of their last Seattle shows at Moe’s Mo’ Roc’ N Café (now known as Neumos). As usual, the show was streamed live by Seattle website iMusic.com. But it was also recorded for later re-broadcast, along with recordings of the other shows iMusic streamed.

The tapes of the live shows were put in the archives, and there they stayed. iMusic’s founder, Scott Blum, now says he was waiting for the right time to release them. “Recently when I came across the boxes again, I was very excited to listen to them,” he told me earlier this year. “And I realized that many of these recordings were even more relevant and exciting today than they were when they were originally recorded.”

Hence the creation of a new label: MOE Recordings. And 7 Year Bitch was given the honor of being the inaugural act. It’s perfect. The band released three studio albums during their existence in 1990s, but it was their live shows that built their reputation. The band pounded out tough, powerful rock ‘n’ roll, topped by the distinctive growly vocals of Selene Vigil-Wilk. I can readily attest to what a riveting act they were to see in performance.

Now those unfortunate enough to have not been there can experience what they missed. And there are plenty of highlights on Live at Moe, such as “M.I.A.,” a searing number about the death of one of the band members’ closest friends, Mia Zapata, lead singer of the Gits, who was murdered in July 1993. Three years after her death, the emotional wounds were still raw, and the song perfectly captures the horror of the event and the frustration of knowing that her killer had escaped justice. Even now, it’s a hard song to listen to. (In 2003, Mia’s killer was finally apprehended; the following year he was convicted and sent to prison.)

But 7 Year Bitch’s songs also had a sharp sense of humor. Case in point: “The Scratch,” which starts with Vigil-Wilk’s fierce demand, “I want it! Give to me, I love it!” as she insists on gaining pole position because she’s first in line, only to later admit, “Well, maybe I didn’t see it first/But I’m the one who wants it worst!” “Hip Like Junk” is a taut, swaggering blues. And despite its title, “Rock A Bye” isn’t a lullaby.

The show was also guitarist Roisin Dunne’s final appearance with the band, and she’s sent off with the jocular “Kiss My Ass Goodbye” (the band’s other members were Elizabeth Davis-Simpson on bass, and drummer Valerie Agnew). And that was it from 7 Year Bitch — for now, at least. Vigil-Wilk showed that her vocal chops are still in fine working order at two benefit shows in Seattle last December, and the number one question the band members were asked when they got together for a special panel at the Experience Music Project in January was when the band would reunite. There are no plans yet, but the audience’s excitement clearly impressed the band members. At least there’s finally a live album to rock out too. And you can expect more live releases from MOE Recordings, of both local and national acts, in the future.

(Live at Moe is available for purchase via Shopify in digital, CD and vinyl formats. Purchasing the album on any physical medium will get you three songs digitally right away. Watch a promotional video for the live album below.)