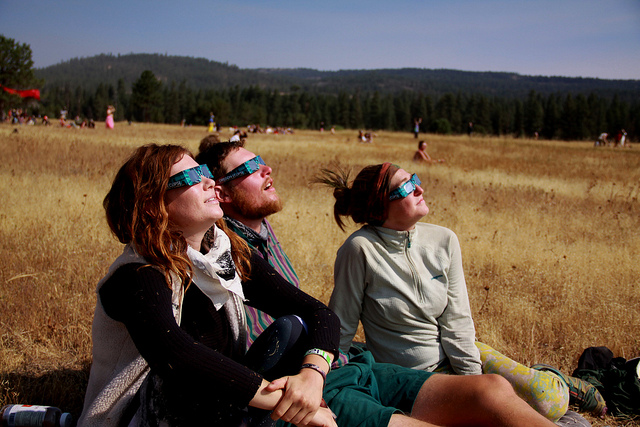 All photos by Colin Hudson

The journey to the eclipse began well over a month ago when I first started chronicling the road to one of the largest music festivals in Oregon history. At the time, my biggest concern was whether my aging body and brain would be able to handle seven days on the hot dusty prairie in Central Oregon. If the lung damage, fever and fatigue I’m still struggling through as I write this is any indication, this concern may had been true. However, due to a remarkably diverse lineup, an arrangement of different activities spanning all hours of the day, I was nowhere close to being too old for the festival. 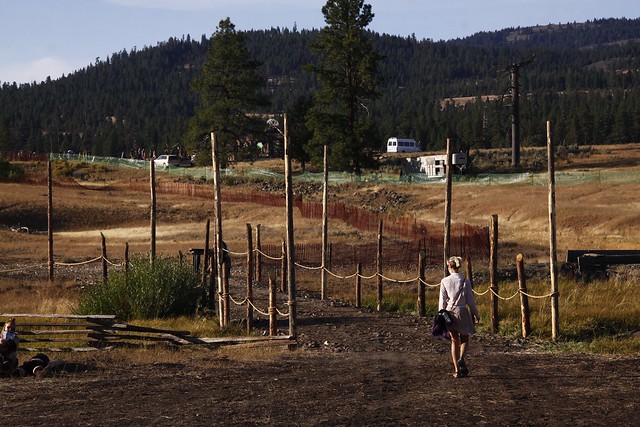 This gathering was designed for all ages and levels of festival experience out there. And even the most versed festival goers had their share of difficulty. Being a first year event, long lines upon arrival were predicted. However, no one was expecting the wait of over 12 hours for the early entry on Wednesday and a line that stretched all the way back to Prineville, nearly 20 miles away from the site. On the first day, if you arrived in line at 6 a.m. you wouldn’t have made it in until around 7:00 or 8:00 p.m. 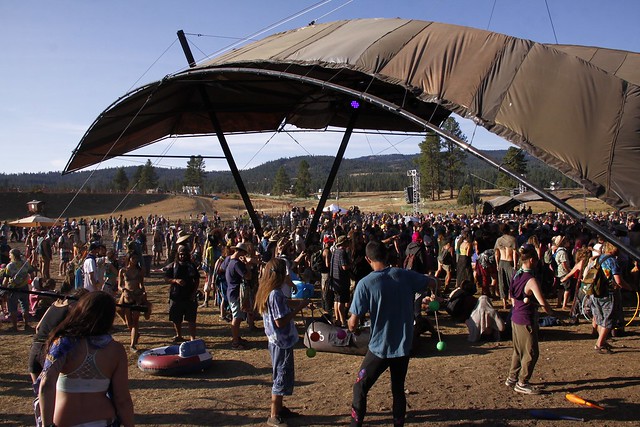 Upon arrival into the festival grounds, all the eye could see was car after car next to their makeshift camps. A sea of canopies stretched about a mile down the wide open cow pasture suddenly converted into a hippie commune in the middle of Trump country. There was no plumbing on site, no Starbucks, and most challenging for a lot of us, no cell service. This was home for the next six days, and the eclipse seemed too far away to think about at the time.

Although many people had been on site for longer than 24 hours, Friday marked the first full day of festivities. The day started with morning yoga and the schedule was filled with keynote speakers, workshops and music. Philosophers and idealists such as Tim Freke gave talks on self-discovery, permaculture, and a number of other progressive ideas. For those in need of relaxation, a giant lake with a makeshift beach lined the grounds along with dinosaur and unicorn floating devices and water slides. Half the festival spent the majority of their days jumping in and out of the hippie-infested waters during the 90 degree days.

Similar to the day before, everything was up in running come Saturday, except with a notable amount of people staying back and taking some much needed naps. Other than that, the talks resumed, the lake hosted a party, and music slowly filled in time slots throughout the day. Once Sunday came around, the marathon of a seven-day festival settled in. I looked back at two nights of serious raging and could only wonder how I would manage to put together two more. And not just two more easy days, as the schedule got even more intense as the hours leading up to and following the solar eclipse. Oh yeah. The part where the moon covers up the sun and inspired this whole damn thing? That hadn’t even happened yet, and I was staring at half full bloody Mary wondering if it was actually going to take place. Of course, it was set to happen. You could feel the anxiety of thousands of like-minded individuals running through the air.

Once Monday morning came around, a feat was accomplished that had (more than likely) never before been seen at a festival. Damn near the entire crowd woke up before 10AM and made their way into the grounds. In the giant viewing field, groups of people waited in anticipation. Each time the sky got darker, everyone howled in unison sending goosebumps throughout the field. Cheers belted out at the moment of totality and everyone danced, hugged, or just stared at the moon-covered sun. The two minutes of totality seemed longer, but soon enough the moon pulled away and the darkness became light again. Appropriately, “Here Comes the Sun” blasted from the speakers on the main stage.

Festivities began to come to closeout on Tuesday. A few groups left on Monday, but Tuesday held the largest exodus despite the event not officially coming to a close until the following day. After the dust had settled (literally), it’s hard to imagine the folks at Symbiosis won’t put together another event on these grounds despite no solar eclipse coming through in the near future. As a first year festival, it wasn’t flawless, but much of the delivery was spectacular. From the stage design, to the sound quality, everything surrounding the music was as professional as it gets. But some of the noticeable flaws came across as borderline amateurish. The decision to not release a schedule beforehand was inconvenient for everyone, and downright infuriating for the people arriving late Thursday after they ran out (seriously, you take the amount of tickets sold and multiply by one). The bathrooms in the campground were pristine by festival standards but on the inside were the complete opposite. The flaws can be fixed rather easily, but the natural beauty of Big Summit Prairie and overall majesty of this festival can’t be played down.