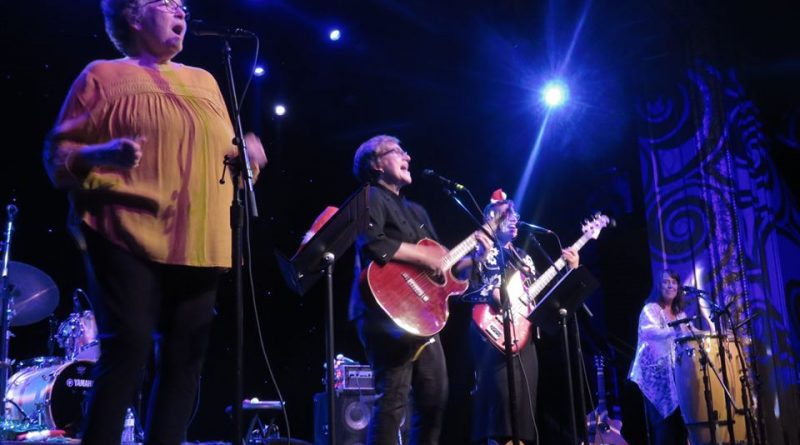 A delighted audience welcomed funky feminist foursome Venus Envy back to Seattle after a 10-year hiatus. The band made a special reunion appearance at the Triple Door on December 10, singing songs from their classic holiday album I’ll Be a Homo for Christmas, as well as numbers from their newly updated debut release, Unarmed and Dangerous.

Venus Envy originally rocked Seattle from 1990 to 1995. The band was a fun side project for its members, who were well integrated into the city’s music and theater scene. Lisa Koch was known for her comedy and theater work, much of it with the late Peggy Platt. Laura Love headed up the Laura Love Band. Linda Severt played with Love’s band and other groups like the Modern Fabrics (she juggles too). And Linda Schierman could be found busking at the Pike Place Market in the feminist duo Raw Sugar.

The band specialized in parody lyrics with a political and/or feminist and/or lesbian edge. Things have changed since Homo for Christmas came out in 1992; in the title track, Koch mused, “Although it’s been said, I may never be wed…” at a time when gay marriage seemed like a pipe dream. But while it might not be as fraught these days to come out to family and friends during the holidays, songs like “Jeanette Isabella” (reworked Venus Envy style) and “Lesbians We Have Heard On High” are certainly still relevant (sample lyric from the latter: “May I bring a friend this year/She’s real nice just wait and see/Always gay and full of cheer/And she’ll share a bed with me”).

Especially impressive was the group’s reworking of the “Hallelujah Chorus” as “What’s It To Ya.” It’s a proud declaration about spending the holiday with one’s girlfriend, sung a cappella, and delivered by Venus Envy with great gusto, even as they joked about being able to hit the high notes. It got the biggest response of the night.

Of course, disdain for the commercialism of the season never goes out of style, and Schierman’s take on “It’s Beginning to Look a Lot Like Christmas” definitely had some bite: “Loggers overcut all the trees/So there’s none left for you and me/‘Cept the plastic kind that doesn’t mind the snow.” Her original number, “I Hate the Holidays,” also expresses a sentiment that many can relate to. And then there were numbers that were just plain fun, like the raunchy “Rhonda, The Lesbo Reindeer,” and the plethora of gifts handed out during “The 12 Gays of Christmas” (turkey basters, vibrators, and two dogs named Sappho).

The second set focused on the group’s non-holiday material, with some of the song lyrics given a 2019-updating. The Venus Envy version of Aretha Franklin’s “Chain of Fools” had originally referenced Bush the Elder, Dan Quayle, and Ronald Reagan; no prizes for guessing who takes their place today (the song also had the best line of the night: “When Putin sneezes, it’s Donald Trump who farts”). Love’s “Nelson,” about Nelson Mandela’s release being just a step on the road to justice, replaced the fall of the Berlin Wall with an endorsement of the Green New Deal. And “Step Into the Future,” Schierman’s original, optimistic song of empowerment, included a reference to Dr. Christine Ford’s testimony during the Brett Kavanaugh hearings.

But the lyrical cleverness wouldn’t mean much if the band didn’t have the musical chops to back it up. It might’ve been 11 years since Venus Envy’s last reunion, but they proved to be just as musically strong as ever. Throughout the performance, each member took a turn as lead vocalist, with expert backing vocals and harmonies provided by the rest. Instrumentally, there was a decided funk factor, due to the prominence of Love’s bass; Koch handled most of the guitar duties, Schierman played a bluesy harmonica, and Severt seemed to play just about everything (but mostly drums and percussion).

There was also a new release to promote. Unarmed and Dangerous was initially only available on cassette, and has long been out of print. It’s now been reissued in expanded form, with seven bonus tracks, taken from live performances in 1994 and the last Venus Envy reunion show in 2008. It also includes Peggy Platt’s last guest appearance with the group; when Platt took over as lead vocalist, the group transformed into a punk band, the Surly Bitches (check out their appearance on the Spud Goodman Show). Both Unarmed and Homo for Christmas are available on CD and digitally from bandcamp.

The second set was more serious in tone; Severt performed “Where the Angels Play,” inspired by her work with terminally ill children, and Love sang “I Still Believe,” from her last solo album, She Loved Red, about maintaining optimism in the face of despair. That optimism was even more evident in the closing songs of the night. “America The Beautiful,” performed a cappella with gorgeous harmonies, was a way of saying, “Hey, this is our country too.” And the last song, “Put a Little Love in Your Heart,” had a message that’s timely all year round.

The teasing banter and interplay between the band members made it clear the group was having as much fun as the audience. It was no surprise that when Koch speculated about doing another show, “Same time, next year,” someone shouted out, “Same time, next month!” It was great to have you back, Venus Envy. Let’s hope it doesn’t take another decade until you perform again!