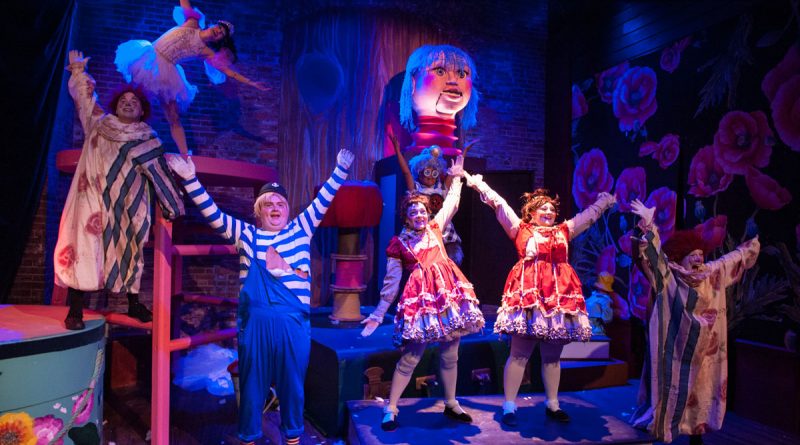 Have you ever wanted to be inside a Tim Burton cartoon? Would you like to have the kind of innovative dining experience where all you know is that you should expect the unexpected? Do you have a secret (or not-so-secret) interest in creepy dolls and wonder what they’re up when we’re not looking?

Then Violet’s Attic: A Grand Ball for Wicked Dolls is the show for you.

The show is the latest production from the folks at Café Nordo, who’ve landed at a cozy space in Pioneer Square (just down the block on S. Main from the former Elliot Bay Book Company site) to set up their immersive dinner theater show. The setting is the titular attic, with the requisite low lighting and dusty objects. Including dolls. And you, the audience members, you’re all dolls too. And there’s an elaborate tea party that’s been devised expressly for your pleasure.

Violet’s the owner of the dolls, and she’s a menacing presence, seen, but not heard. The dolls are a motley crew: a dysfunctional clown couple; a chubby, insecure boy who’s losing his stuffing; two spiteful twins; a ballerina who dances at the drop of a hat. There’s also a sinister “Jill-in-the-box” hovering the background, coming to agitated life at unexpected intervals, and seemingly a conduit for Violet herself.

The story unfolds slowly; it takes a while to figure out what’s going on. The dolls ramble around doing recitations that mash up dialogue from The Wizard of Oz and Jaws (while the clown couple could be veering into argumentative Who’s Afraid of Virginia Woolf? territory). Which is perfectly appropriate for an evening that feels like it’s rummaging around in boxes of old things that have been kept in storage. As you sit at your table waiting for the show to begin, humming to the background music, you suddenly realize that it’s familiar — you’ve heard it in those Scooby-Do, Where Are You! cartoons you watched as a child. The show is full of other such ghosts from the past.

Every element of the evening is a part of the experience. The hosts that seat and serve you are squeaky voiced dolls (and the dolls might make cute or snarky comments as they serve you, but not to worry; there’s no enforced audience participation beyond that). The three-piece band is dressed like toy soldiers. And you quickly get into the spirit of things from the first serving of your four-course meal. The appetizer is a paper strip with what appear to be candy buttons, but they’re really colored spreads with the exotic flavors of kalamata and feta, kuri squash and ras el hanout, beet and goat cheese, and avocado, lime, and cilantro. And those red and green bon bons? They’re not filled with nougat, but the more savory delights of chicken liver mousse and cherry balsamic jelly.

The other courses are just as inventive. They’re served at intervals throughout the show, when the dolls call out “It’s tea time!” After the appetizers, you’re served a roll of “Smarties” — sea scallops sandwiched between slices of tomagoyaki (a Japanese omelet) and wasabi honeycomb (which looks like a spider’s web made out of green pepper). The main course was “Salt Water Taffy,” a large round object wrapped in paper that turned out to be a rolled pork loin stuffed with hazelnuts, sage, apples, cranberries, and manchego cheese. Dessert was tea sandwiches, with a sweet filling, instead of the sliced cucumber that’s usually in such fare. All very intriguing — and delicious. Note that they have vegetarian/gluten free offerings too, and if you have any other dietary restrictions you can make arrangements in advance.

The band provides inventive backing for the proceedings. There are a couple of surprisingly cheery songs (the dolls are ever-anxious to please you), but for the most part, the musicians are playing backing music, as well as providing numerous sound effects, like those used for a radio serial (plenty of bang-bangs and pings!). The music (by Annastasia Workman, who also plays piano and glockenspiel in the band) is carnival-creepy, with an occasional foray into black humor; during one of the dining periods, the band played the Beatles’ merry ode to murder “Maxwell’s Silver Hammer.”

Things take a turn for the sinister when an unexpected guest arrives in the attic. Now the story begins to heat up, and who can say how things will happen? No spoilers here, folks. Violet’s Attic is a journey into the dark. All you have to do is sit back and enjoy the ride.