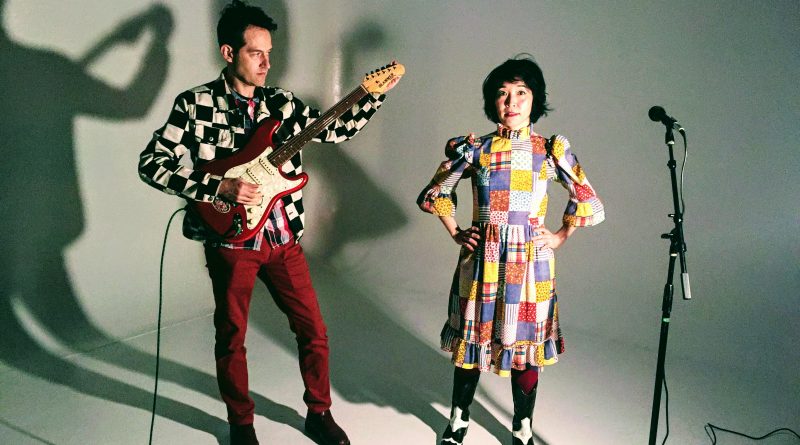 Skeleton Flower, a division of Seattle’s long-running Degenerate Art Ensemble (see below), recently came out with its own compact disc, a self-titled exploration of the larger project’s musical side (see below).  Joshua Kohl, co-leader of Degenerate along with Haruko Crow Nishimura, was kind enough to take some questions.

Joshua: Crow and I spent the ‘90s collaborating with tons of incredible musicians, artists, dancers and performance artists creating tons of work in every imaginable format. It was our self-education and exploration and was truly a fertile ground and an amazing time to be in Seattle among super talented and wild people.

It was around 2000 that our vision as a collaborative duo really congealed and for that collaboration we came up with a group name to host all of our work; Degenerate Art Ensemble. DAE is an umbrella for all of the work we do. And it is a very wide umbrella. Crow and I are very creatively hungry artists and absolutely love trying new things, pushing our own limits and the limits of our medium and being inspired by our many collaborators.

NWMS:  How did the Skeleton Flower project grow out of Degenerate Art Ensemble?

Joshua: Currently there are two main streams of Skeleton Flower. The first branch of Skeleton Flower is our Dance/Music/Theater performance that premiered in March of this year. It is a semi-autobiographical exploration of a creative person’s struggle with identity, depression and the awakening of personal power through rich music and soundscape, dance and movement theater based on the difficult, and at times violent, upbringing of our dancer/singer/director Haruko Crow Nishimura.

The second stream is the Skeleton Flower band which is about to release its debut album. The album includes music from the performance plus a bunch of new songs that take their inspiration of the themes of the performance but were written as standalone songs.

The project Skeleton Flower will also be a virtual reality piece and has already taken the form of a museum installation. Basically, the project has been so personal and so fruitful for us that it has taken a life and autonomy of its own and is becoming its own entity and multi-faceted forum for expression.

NWMS: What are your best, worst, and oddest stories of taking confrontational, surrealistic, and funny material to the stage, both in Seattle and around the world–which towns, venues, years, other acts on the bill, etc.?

Joshua: We have had the amazing fortune of collaborating with so many incredible artists including the theater director Robert Wilson and the Kronos Quartet and the work has taken us around the US and Europe. Everywhere we have gone, there is always an audience who is hungry for work that leaves plenty of room for the imagination to interpret, imagine, digest and re-imagine.

We believe strongly in our audience’s intelligence and creativity and ability to make their own sense out of what we bring to them. So, while we labor over our work, often for years on a single piece to create very specific experiences, we have no problem with people discovering their own meanings in what they see and hear in our work.

One very difficult experience, though, happened in the days after 9/11. We were doing an extended residency and series of performances in Berlin at the time of the 9/11 attack. We were performing a piece that obviously had nothing to do with 9/11. It was a super surreal and comical piece. But doing it in the aftermath of the fall of the Trade Centers had a very strange effect. We were in a strange way representing the USA to the people there. So they were looking for meaning related to the political situation in the work and didn’t find it. People would ask, “what does this have to do with the attacks?”. They wanted to know why we weren’t making statements.  But, of course, we had been working on the performance for the past two years. Because the work is surreal, people were looking for meaning in relation to the external reality.

On the flip side, our first iteration of Skeleton Flower took place on a tour of the US West Coast in the fall of 2017 precisely as #MeToo was breaking. And the piece has a lot to do with personal stories of abuse and violence. We had no idea it was going to coincide. Because of the timing it was resonating deeply with the audience in the very related cultural and temporal reality outside of the theater, even though it was created prior to the break of #METOO.

NWMS:  How do you go about creating, and balancing, the visual aspects of your work, with the musical?

Joshua: They are absolutely intertwined. The visual and sound aspects are all colors on the pallet that we are working with.  In the process of creating the stage works, sometimes the movement comes first, sometimes the music comes first. We tend to work very instinctively. How do we create a feeling or a space? Sound and image are really not separate for us.

NWMS:  How did you go about recording the CD–where, and with whom?  How does the music function in the absence of the visual?

Joshua: We recorded the Skeleton Flower album at zulusound in West Seattle with engineer co-producer Evan Schiller. Evan is a very important recordist/producer in our city. He has recorded an insane number of records with just about every important musician in the avant-garde community of musicians in Seattle.

He was also the drummer for the band SadHappy back in the Grunge days.

Evan has so many great ideas and knows how to get just the right sounds. I felt like he was a bit of a mind reader. It was such a pleasure working with him. The music album functions entirely independently of any visuals. It is pretty much a straight rock album but infused with our experimental edge. But as close to a pop record as our skewed minds could come up with.

NWMS:  How do the two spearheads of the project, Nishimura and Kohl, differ from each other?  What are their similarities?

Joshua: Crow and I are opposites in many ways. She tends to be more of an abstract thinker and I tend to be a bit more traditional in some ways (of course my traditional, is someone else’s abstract). But if you combine those two you end up with something that moves back and forth between the two. It leaves breathing room for the abstract to breathe and float, but also has a level of familiar and literal that can help to guide the viewer along.

We both pay very close attention to the audience’s experience and try our best to make sure that their experience is what we want it to be.

NWMS:  How did you find a workable way to work together?

Joshua: I think good collaboration is about honesty, clear communication and respect. We have worked together long enough that we can pretty much read each other’s minds. Sometimes we have conflicting ideas, so we try them all out and see which one works best.

NWMS:  What’s in the future for Skeleton Flower and Degenerate Art Ensemble?

Joshua: The album release marks the end of the creation for both the album and the performance, so next up is bringing this work to the world.

We are working on both band/music and dance/performance tours in the US and Europe for next year.  We are also finishing up a Virtual Reality piece based on Skeleton Flower and a museum installation. So many exciting tendrils to this art-ctopus!!!