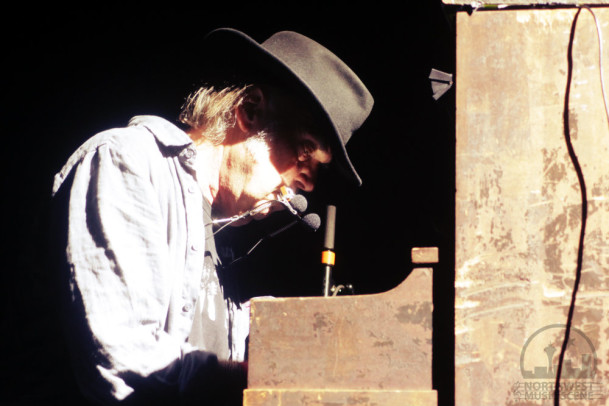 Neil Young brought his Rebel Content tour to Seattle on October 4 and took the stage at the jam-packed WaMu Theater just a fuzz past 8 p.m.  For the next close to three hours he dug deep into the catalog and also played songs that are important to him today.  Young has always been very vocal, but now even more than before, about causes that should be important to every American. Monsanto, GMO,  Wall Street….it’s all there in his music.

Young even went on to bash hometown coffee behemoth Starbucks to a whole lot of cheers from the audience.

Before Neil Young took the stage though an ensemble of fantastic singers from New York called The 99 Percent came out. They sang and they talked about Monsanto and saving the earth and Black Lives Matter, which of course is a subject we’ve heard a lot about here in the greater Seattle area. You’ll remember Bernie Sanders’ speaking engagement got cut way short by BLM back in August in a highly publized take-over of the stage.

Speaking of the gray-haired lovable Vermont senator that is winning over the hearts and minds of the millennials of this generation, someone in the crowd yelled “Go Bernie’ during the opening band’s set and the crowd erupted in cheers.  And really the whole night sounded quite a bit like a Bernie Sanders rally with all the talk about GMO’s, Monsanto and corrupt politicians.

The opener played a short but sweet set full of  fire, passion and energy, at the same time delivering a message that fits in well with the anti-Destroy The Planet message that has been a big part of this Promise Of The Real tour.

Their set felt like an old timey revival and even had a preacher man. They were fun and I enjoyed them a lot.

The energy in WaMu before the main event was electric with the old hippies out in full force and mingling with perhaps a little younger contingent of Neil fans. GoEARTH.org got a big shout out during the concert as right before Promise Of The Real took the stage, the farmers came out to spread some seed and water the flowers, while a stake sign was paraded around on the stage.

When Neil came out he was alone at first and sat down at the piano. He delivered a chilling version of “After The Goldrush” , the title track from his 1970 album. That set the tone for the concert and the crowd knew they were in for a special night. As Neil Young sat at the piano, alone in his thoughts, you could have heard a pin drop in between every stroke of the ivory on weathered-looking piano as he poured his heart out in that song.

Next, Young traded in the piano for an acoustic guitar and laid down a spot-on version of “Heart of Gold’, which appeared on his 1972 album ‘Harvest’. As he caroused gently around the dimly stage the crowd was literally mesmerized by this living legend.  When he finished they erupted in applause.  I was in the photopit for the first three songs and one of the other photographers turned and said to me, “holy shit, it’s really him and he’s right in front of us”. Clearly a big Neil young fan. And why not Young is as legendary as it gets.

Prior to the full band coming out to join the Canadian born singer songwriter, the stage was sprayed down by a group of people wearing Haz Mat suits which brought more cheers from the crowd. Of course this was another stab at Monsanto, the evil corporation that Young has been very vocal against.

If you were thinking that the Promise Of The Real is just some worn out backing band hired to follow Neil around and play hits off his gold records you’d be sadly mistaken. With Willie[Nelson]’s sons Lukas and Micah ripping and shredding all night long and doing a great job of matching the energy of the 69 year old legend, the Promise Of The Real is no joke, they totally kicked major ass.

The concert had most of what you could dream for in seeing Neil Young live. The mellow heart-string tugging classics interspersed with the filthy jams that make him the Godfather of Grunge and included a 20-minute long, ridiculously awesome version of “Down By The River”, from his 1969 album ‘Crazy Horse’.  For the encore they played an energetic-as-hell rendition of “Cinnamon Girl” and closed the show out with “Fuckin’ Up”.  The deal was done and crowd was happy.

Although he approaching 70, it’s clear he’s still having a blast doing this, delivering epic music to the masses and although he’s always been environmentally conscious, he has taken that to a new level and that no doubt gives him even more energy.  Go see this tour if you get the chance.

Check out the setlist HERE