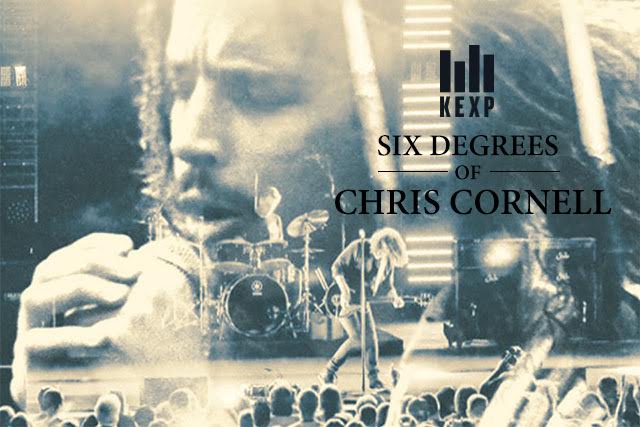 SEATTLE – This Friday, May 19th from 6:00 AM to 6:00 PM PT, KEXP on-air hosts John Richards, Cheryl Waters, and Kevin Cole will program a day of music to celebrate the life and music of Chris Cornell. At 6:00 AM, John will start his show with a song by Cornell and one of his many projects, and each song played thereafter will somehow link to the song played before it.

Connections can include anything from guest vocals, shared musicians, same producers, and more. None of these connections have been pre-planned, and our DJs will be thinking on their feet to come up with the next song as they do daily on KEXP.

The Six Degrees series began in 2013 with Sharon Van Etten, followed by Greg Dulli in 2015, and Robyn Hitchcock in 2016.

Following news of his death by suicide, KEXP immediately began a tribute to Cornell by playing a full day of music from the singer’s career.

“It’s another sad day in the music community,” said John Richards, host of The Morning Show on KEXP, “and a particularly sad day for the City of Seattle. We’ve received thousands of emails, text messages, and other comments from friends and fans of Chris, all of them sharing stories of the powerful impact his music had in their lives.”

KEXP is hosting a moment of silence at 5 PM today, Thursday May 18th, for fans to join together in remembrance of the singer.

“We want to make sure that fans of Chris’s music will have a place to go to remember his life and influences,” said Richards, “and that’s what our programming is going to be all about for the next couple of days. His death is also another reminder of how important it is that we all support each other, and encourage our friends, family members and loved ones to seek help if they are experiencing depression or thoughts of suicide.”

This edition of KEXP’s “6 Degrees” programming was originally announced as a tribute to musician David Byrne. With the passing of Chris Cornell on Wednesday, KEXP DJs decided to shift gears and pay tribute to the Soundgarden vocalist instead.

WHAT: A full day of on the fly music programming, centered on the life, career, and musical connections of Chris Cornell and the artists he has collaborated with and inspired.

KEXP is a music-focused nonprofit arts organization serving music lovers and artists through in-person, broadcast, and online music programming. KEXP operates one of the most influential listener-supported music radio stations in the country, KEXP-FM, Seattle. More than 200,000 listeners from around the world tune in to the station each week over the air and online. On KEXP’s YouTube channel, videos of exclusive in-studio performances garner more than 2 million views per week. KEXP produces hundreds of live performances each year, many of which are open to public audiences at no charge. For more information, please visit www.kexp.org.