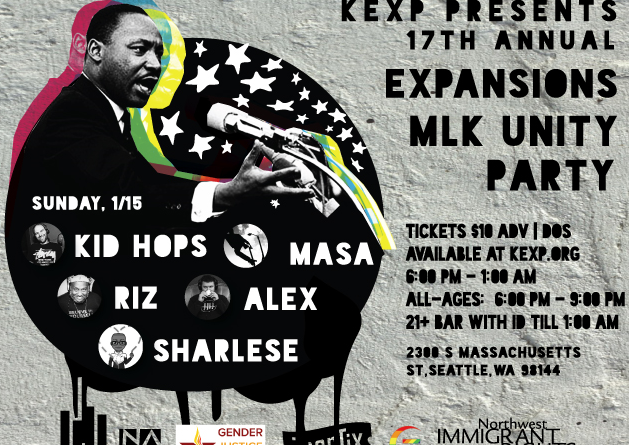 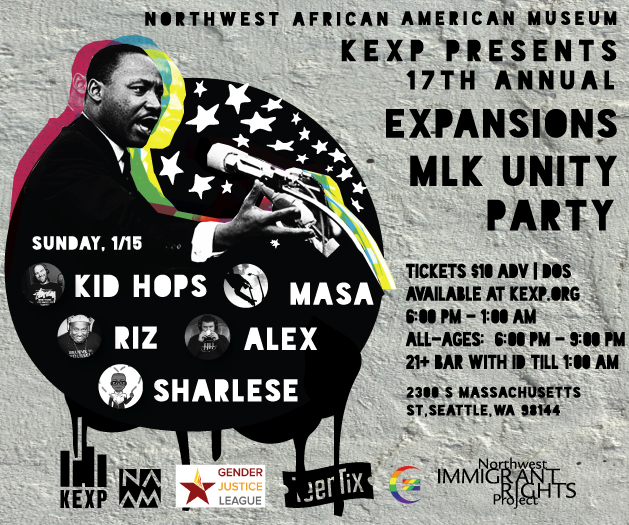 KEXP is proud to present the 17th Annual Expansions MLK Unity Party on Sunday, January 15th from 6:00 P.M. to 1:00 A.M. at the Northwest African American Museum in partnership with Gender Justice League, TeenTix, Northwest Immigrant Rights Project and NOOR. KEXP and company invite all to join them for an exciting evening of music, dance and celebration as they gather and stand together in the name of unity and hope.

For the first time, the 2017 Expansions MLK Unity Party will be open to attendees all ages from 6:00 p.m. to 9:00 p.m.  Then, from 9:00 p.m. to midnight, KEXP will broadcast live from the event. This will also mark the first time that all of KEXP’s Expansions hosts — Alex Ruder, Sharlese Metcalf, Masa, Kid Hops and DJ Riz — will share the same stage on the same evening.

“While it’s been our privilege to host this first of the year event for 17 years, this will be the third time it has coincided with a conspicuous American milestone,” said KEXP DJ Riz Rollins. “Eight years ago it was held near the eve of the inauguration of our first president of African American descent. It felt like the culmination of a century’s long journey from the horrors of incarceration and slavery to the brightest lights of freedom and justice. Four years later our celebration again coincided with the eve of the second inauguration of that president amidst with what we recognized as the great work that still needed to be done to heal and unify our country.  This year we’ll have the same event, but now against a backdrop of fear, tarnished hopes and uncertainty. Yet, as survivors and laborers still working to realize the promise of our unity we hope our celebration will help signal the tightening of our ranks and what we understand as the unending promise our freedom and of our lives, liberties and pursuits of happiness.”

“As we face the challenges of humankind that come our way, there are many things that we can do to make the world a better place,” said KEXP DJ Sharlese Metcalf. “Coming together, in song and dance is a form of celebratory meditation. For 17 years, the Expansions crew has held down one of the most important gatherings in the city, The MLK Unity Party. A coming together for a person that said, “We must concentrate not merely on the negative expulsion of war but the positive affirmation of peace.” Let’s bring in 2017 together, through song and dance, the way Dr. Martin Luther King would’ve liked it.”

Advanced tickets to the event are priced at $10.00, and you can grab yours here.