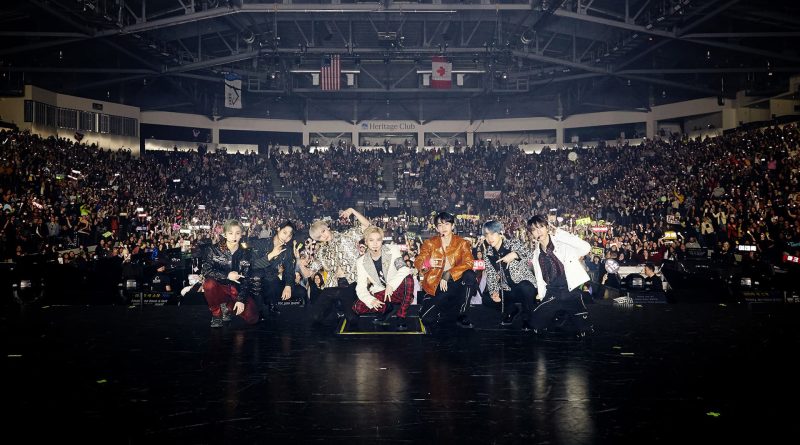 Jopping (v.) a combination of the words jumping and popping, and the title of K-pop group SuperM‘s first hit song and music video. SuperM captured the hearts of eager fans Tuesday night when they played their first Seattle-area show at the accesso ShoWare Center in Kent. The venue was packed with fans of all ages and genders screaming for their favorite group member. Two solid hours of impressive vocals, rapping, and dancing had captured even the parents in attendance by the end of the night. Flawlessly-executed costume and set changes in between numbers made for a healthy amount of contrast. Overall, the night was wildly entertaining for all.

If you’ve never heard of SuperM before, they are a 7-member boy band from South Korea. Formed in 2019, they have released only one EP to date, from which “Jopping” was the title track. However, prior to joining SuperM, each group member was a part of another K-pop boy group under the label SM Entertainment. They came together to work on a new project, veteran performers teaming up with much younger stars to create something totally unique. Taemin originally made his K-pop debut with SHINee back in 2008. Kai and Baekhyun started as members of K-pop giant EXO, debuting in 2012. Taeyong and Mark are K-pop sophomores, with their original group, NCT 127, having debuted in 2016. And last, members Ten and Lucas were recruited from WayV, the most recent group to premier, just months before SuperM in 2019. However, even with this unique group composition, SuperM’s dynamic is flawless. (You would never guess that there are almost 8 years’ difference between the oldest and youngest members!)

With only 5 songs in their group repertoire (and a sixth newer song yet unreleased), it is hard to imagine this concert lasting nearly 2 hours. However, SuperM’s group performances were only half of the show – they also included solo performances as well as some smaller groups (like this duo, one of my favorite K-pop songs ever, which I was thrilled to see/hear live). Staggering their group songs between these smaller performances meant we were never left hanging while the group was backstage changing clothes or resting between songs. K-pop concerts are often fast-paced and exciting, and SuperM was no exception.

If you’ve never been to a K-pop concert, it’s difficult to convey just how much happens at these events. The ShoWare Center was decked out with amazing laser lighting, confetti cannons, fog machines, and an admittedly strangely-shaped stage. (The group even threw frisbees out into the audience at one point.) However, one of the most interesting and aesthetically pleasing features of this show wasn’t what SuperM brought, but instead the fans. Most of the concert’s attendees had K-pop concert accessories called light sticks in their possession. Light sticks are usually battery-operated flashlight-esque items, unique to an individual group or artist. When many are turned on at once in a crowd, they create a sea of colors. Even more notable is the fact that SuperM’s official light stick uses WiFi to sync up with other light sticks around it, and can be controlled by the concert organizers. Because of this, the many light sticks in the audience lit up in time with the music, creating a sensory experience everywhere you looked. 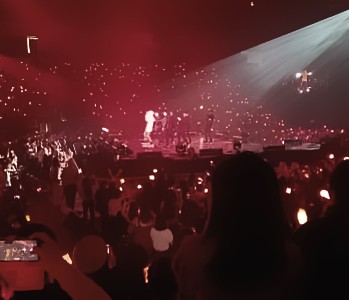 Of course, even though K-pop concerts are multi-dimensional performances with many moving parts, the 7 members of SuperM are also musicians, and they brought their A-game on the music front as well. Each member specializes in either singing or rapping, or in some cases both. They each have a unique voice and style of music, but they all blend together seamlessly. The song that opened the concert was called “I Can’t Stand the Rain”, K-pop’s modern answer to the power ballad. After having waited outside in the pouring rain for over an hour in line, this felt like a very appropriate way to begin the night. Taemin and Baekhyun’s powerful vocals made this song an amazing live experience. As the night went on, SuperM members showed off their musical talents with songs that delved into trap, EDM, hip hop, and R&B – all while performing full dance routines. Along with being fun to watch, their sheer level of talent is wildly impressive.

Besides the exciting visuals and fun music, SuperM also brought with them their sincere attitudes and their goofy personalities. Regardless of Taemin’s amazing vocal abilities or Ten’s incredible dancing, when it comes down to it, they’re a group of 20-somethings who love what they do and love their fans. They made sure to thank everybody for coming as they addressed the audience. They also mentioned that it was each group members’ first time visiting Seattle, but they made sure to promise they would be back. That earned them a very enthusiastic response from the audience, many of whom feel that Seattle doesn’t see as many K-pop artists as it should (myself included).

Overall, SuperM delivered on every front one hopes for when attending a K-pop concert: the music was skillfully performed, the dancing was superhuman, and the energy from everybody in the venue was through the roof. SuperM has clearly captured the hearts of northwest K-pop fans, whose screams left my ears ringing for hours after the show ended, and hopefully this first visit of theirs won’t be their last.