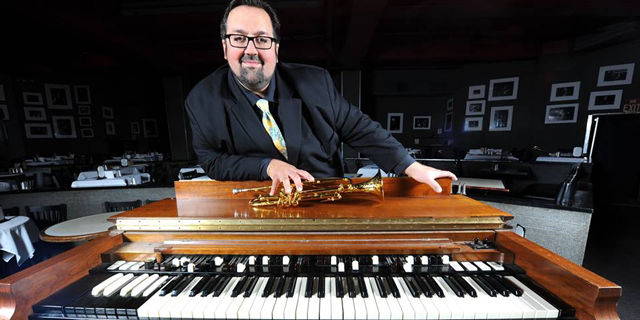 The Pacific Jazz Institute at Dimitriou’s Jazz Alley welcomes Jazz Organist Joey DeFrancesco along with trio members Troy Roberts (Saxophone) and Michael Ode (Drums) back to Seattle on May 8 and 9, touring in support of his Grammy Nominated release Project Freedom. Show times Tuesday and Wednesday at 7:30pm. Doors open at 6pm each night. Purchase tickets HERE.

The Organist, trumpet player and vocalist Joey DeFrancesco has been making amiably hard-swinging albums for years. His latest release, Project Freedom is one of the Philadelphian’s most personal journeys into his favorite soul-jazz territory yet. Songs by everyone from Sam Cooke (“A Change Is Gonna Come”) to John Lennon (“Imagine”) surface on the track list. The title track is fast moving and free-boppish after a Hammond-sermon intro, and The Unifier has a contemporary soul-funk sound. Meanwhile, the gospel classic Lift Every Voice and Sing sparks a fearsome double-time organ break, and the versatile DeFrancesco plays some Miles Davis-like muted trumpet on One.

Raised in Philadelphia, this is where the foundation of his musical roots in Jazz, Blues and other musical art forms were born. To hear Joey DeFrancesco today, his music embodies the traditional art form infused with a distinct modern approach, just part of what makes his music unmistakably his own.

DeFrancesco signed his first deal with Columbia Records at the age of 16. Organ jazz had all but gone into hibernation from the mid-’70s to the mid-’80s until DeFrancesco reignited the flame with his vintage Hammond organ and Leslie speaker cabinet. He’s considered to be largely responsible for bringing the classic Hammond organ sound back to jazz in the late 1980s.

DeFrancesco has recorded and/or toured with his own groups as well as numerous renowned artists that include Ray Charles, Diana Krall, Nancy Wilson, George Benson, James Moody, John Scofield, Bobby Hutcherson, Jimmy Cobb, John McLaughlin, Larry Coryell, David Sanborn and many more. The four time Grammy® Award-nominee, with more than 30 recordings as a leader under his belt, has received countless Jazz Journalist Association awards and other accolades worldwide, including being inducted into the inaugural Hammond Organ Hall of Fame in 2014, the Philadelphia Music Walk of Fame in 2016 as well as topping the Critics Polls in DownBeat Magazine eleven times over the past fifteen years and the Readers Polls every year since 2005. DeFrancesco also hosts a weekly program on SiriusXM Radio’s Real Jazz channel titled “Organized.”