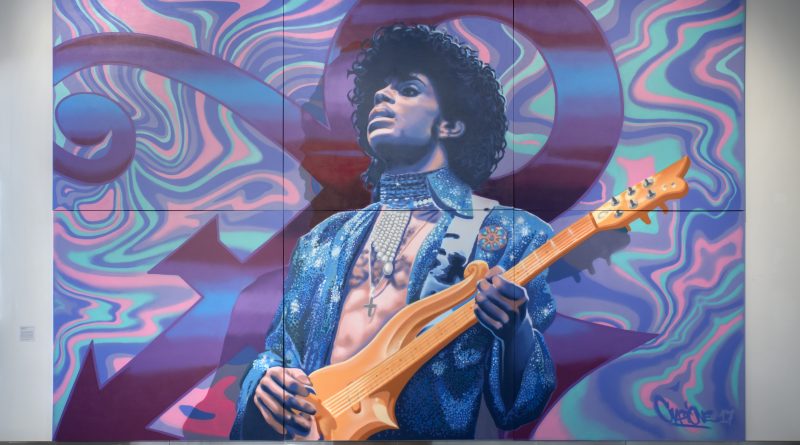 The “Prince From Minneapolis,” exhibit, running now at the Museum of Pop Culture (MoPop) at Seattle Center, details the diminutive, mercurial, outspoken, yet often elusive superstar and fashion icon through the lenses of four photographers who worked up close with him: Allen Beaulieu, Nancy Bundt, Terry Gydesen, and Robert Whitman. The exhibit began at the University of Minnesota’s Weisman Art Museum (WAM). The original curator, WAM Senior Curator Diane Mullin, was kind enough to take a few questions.

NWMS: What was your first exposure to Prince’s music–where, when, what songs, albums, etc.?

Diane Mullin: When I was a freshman in college in New Hampshire in the early 1980s I had of course heard of Prince, but had a friend who was from Minneapolis (I am from New England) was a super, Minneapolis fan who really exposed me to Prince’s music and the phenomenon of the Minneapolis Sound long before I had any idea I would eventually live here.

1999 and Purple Rain exploded on the scene during my time there in New Hampshire, and those albums and the film were really my entry points.

NWMS: Which of his songs, albums, videos, and movies, became your favorites, and why?

Diane Mullin: My favorite album is Sign O’The Times. It came out my final year in college and came as a kind of surprise. I love its moods. Although that is my favorite, I honestly have to say that I have never met a Prince album or recording that I didn’t love!

NWMS: Where were you and what were you doing when you learned he’d died? What were your first reactions?

Diane Mullin: Believe it or not, I was in a meeting with colleagues discussing the Prince from Minneapolis exhibition and conference planning and logistics. We were all stunned when we heard the news.

NWMS: How did you get the opportunity to curate this exhibit?

NWMS: Are you the sole curator? If not, who worked with you and how did you join forces with them?

Diane Mullin: I was the sole curator, but I did partner with UMN professor, Arun Saldanha, who was the organizer of the academic conference of the same name.

NWMS: How did you go about coordinating with Prince’s estate?

Diane Mullin: WAM and the conference organizers made the estate aware of our plans, including the decision that the University would confer an honorary degree to Prince posthumously. As such, I was not the main point person, but our experience with the estate at WAM was a good one throughout.

NWMS: How did you go about assembling the materials for the show? Does a story emerge from the artifacts?

Diane Mullin: As curator I started with the plan to create a small exhibition of the Twin Cities photographers who helped craft Prince’s image, especially in the early years of his career. Those photographs show a star in the making and also show a lesser-known side of some well-known local photographers, such as the political documentarist, Terry Gydesen.

Assembling the other components of the exhibition–the section featuring art works inspired by Prince–came about through gathering some known items, such as the Lillian Colton seed portrait, surveying the field, such as Seattle’s Troy Gua and Erik Noren’s award-winning custom tribute bicycle–and also some directed and dumb luck, including approaching the public muralist Rock Martinez while at work on his Minneapolis Uptown memorial painting; and being at a glass blowing demo the weekend after Prince’s death at FOCI Glass Center, Minneapolis, and seeing the De La Torre brothers create the two glass Prince figures, which I asked to include in the show right then and there.

NWMS: What are your favorite pieces from the exhibit, and why?

Diane Mullin: All the photographs are dear to my heart, since photography is an area of specialty for me and because of their place in the very rich Twin Cities photography culture. Honestly though, I love the rich diversity of all of the objects in the exhibition and have a soft spot for each of them.

NWMS: In addition to materials from Prince’s past, what else will we get?

Diane Mullin: At WAM we worked a professor in the Education School to adapt his interactive web based storytelling program for the exhibition. Titled Everyone Has a Prince Story, this program allowed visitors to create short videos telling their Prince stories. MoPOP has added other objects and material, so Seattle’s expanded version of the exhibition gives the viewer even more points of access, especially to personal affects, which WAM did not endeavor to include.

NWMS: What did you learn about Prince in the course of assembling the exhibit? What were your most important takeaways?

Diane Mullin: First and foremost, I learned how wide and deep Prince’s global reach really was and still is.

NWMS: What are the most surprising things about the man and his stuff?

Diane Mullin: I suppose the above response was a surprise, but I was also surprised to learn more about his complex relationship to his image makers and other visual artists.

NWMS: What’s in the future for you and for the exhibit?

Diane Mullin: “Prince from Minneapolis” will be at MoPOP through this year. We are thrilled that it has more time in the sun, so to speak. The  conference organizers are at work on a book, in which I have an essay on the exhibition.