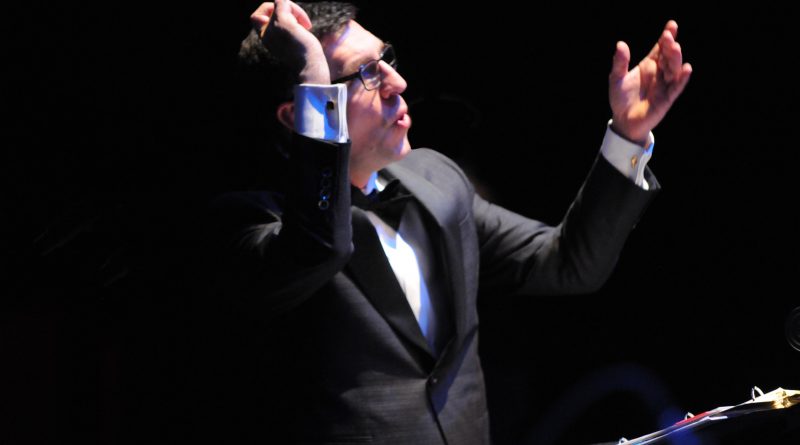 The Seattle Women’s Chorus regales us with “Legends of Rock,” celebrating female voices in the music at least as far back as Tina Turner, at least as far forward as Florence Welch. That’s Sunday, April 28th, at Benaroya Hall, featuring Aeysha “Musicbox” Brooks and special guest Sarah Rudinoff.  Chorus director Paul Caldwell was kind enough to take a few questions.

NWMS:  What is your position at the Seattle Women’s Chorus? What are your responsibilities?

Paul Caldwell:  I am the Artistic Director of both the Seattle Women’s Chorus and Seattle Men’s Chorus. I plan the shows, do the research related to each performance project, lead the rehearsals and conduct the performances.

NWMS:  How do the Supertonics fit in?  Will they be performing in the next concert “Legends of Rock?”

Paul Caldwell:  The Supertonics are an exciting addition to our shows this year. It’s a small group comprising members of both the Seattle Women’s Chorus and Seattle Men’s Chorus. They are dedicated to contemporary a cappella music (think Pentatonix). They’re singing three numbers in this show: “Little Bird” (Annie Lennox), “Heartbreaker” (Pat Benatar), and “Bring Me to Life” (Amy Lee/Evanescence).

NWMS:  Who came up with the “Legends of Rock” idea?

Paul Caldwell:  More and more, the Seattle Women’s Chorus is leaning into ways we can explore the contributions of women to a wide array of genres. This time, it’s rock. Next year, it’ll be something just as exciting. But you’ll hafta wait a bit to hear exactly what!

NWMS:  Which songs/artists in the show are the women having the most fun with?  Any unexpected vocal/choral challenges?

Paul Caldwell:  Well… fun is an interesting word. And it’s very subjective. Every singer would likely give a different answer. I feel like “You Learn” (Alanis Morissette) has been a game changer for the chorus. Their ability to flip back and forth between different vocal colors during the song is kind of jaw-dropping.

“Edge of Seventeen” (Stevie Nicks) is like a religious revelation when they sing it with our special guest artist Sarah Rudinoff. And “One Way or Another” (the song that made Debbie Harry and Blondie famous) has become a profound example of how we can reclaim our power by being honest about traumatic experiences.

NWMS:  What’s up next for the Men’s Chorus & The Women’s Chorus?

Paul Caldwell:  “The Summer of ’69.” In June, the Seattle Men’s Chorus is mounting a show to celebrate the 50th anniversary of Stonewall. The police raided a queer bar in New York…again. But that night in 1969, the patrons fought back. That’s where LGBTQ+ rights were born, 50 years ago. And we’re here to tell (and sing) the story.