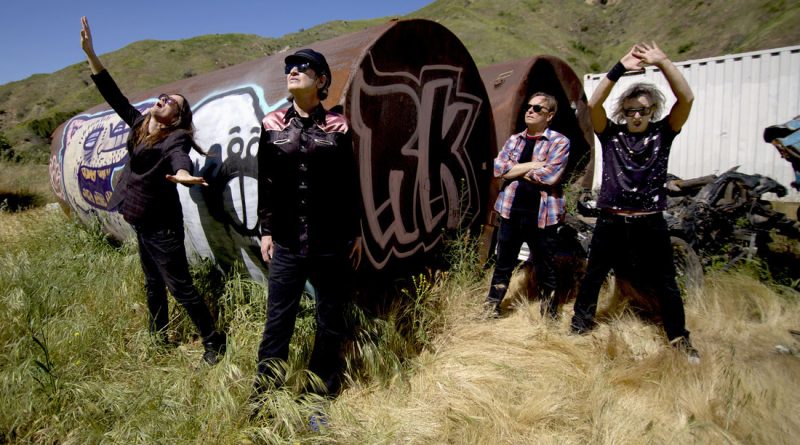 The McDonald brothers, Jeff and Steven, started Redd Kross as middle-schoolers (see below), and through tenacity, wit, and fun, managed to survive into middle age. They’ve toured the world, rubbed shoulders with rock royalty, and starred in The Spirit of ’76 alongside David Cassidy (see further below). The new album is Beyond The Door, named after an Italian horror movie (see even lower below), and they’re bringing the show to Neumos with the Melvins on Friday the 13th and the inevitable Saturday the 14th.  Steven McDonald was kind enough to try and put it all in perspective.

NWMS:  What are your best, worst, and oddest stories of playing Seattle–which years, venues, tours, other acts on the bill, etc.?

First show was at a place called the Central or Central Tavern, in downtown Seattle around ‘86 I believe. I would’ve been 19 and I had to sign a document swearing I would not consume alcoholic beverages, since it was a bar. I remember there were kids hanging off of a fire escape that had an obstructed view of the stage because they couldn’t get in to the show.  A little band you may know of called Soundgarden, supported that night.

NWMS:  What are your favorite places to visit in Seattle and why?

Steven McDonald:  We’re usually just in and out but lately I’ve been enjoy feasting on local Oysters with Dale Crover before the show.

NWMS:  What are your best, worst, and oddest stories from touring the world over?

Steven McDonald: I’ve been very lucky, so not a lot that I could complain about.  Our first show was at an 8th grade graduation party in Hawthorne, California in ‘79. The teens hated us and booed the whole set. We learned quickly how to not back down and deal with an unruly crowd. Also the first lineup of Black Flag played that party too… we got them the gig!!!

NWMS:  You’ve always snorted pop culture.  What were your favorite cartoons as a kid, and why?

Steven McDonald:  Gumby, and Davey and Goliath, which are both technically clay animation. They’re very psychedelic and I used to watch them in mornings when I was getting ready for school.  So watching them now triggers a bizarre combination of surreal psychedelia and dread, ‘cuz I didn’t like school too much.

NWMS:  How would you say Redd Kross music has grown and changed over the years?

Steven McDonald:  We learned how to play a bit, So there’s a technical efficiency element. The sound has been refined over the years but the intention has always remained the same; energetic catchy ecstasy delivered with humor, joy and honesty. All of our different collaborators/band members have helped achieve these goals and all are still valued and remain in our hearts.

Steven McDonald:  The movie’s producer, Roman Coppola,  was a Redd Kross fan and had seen our Super-8 features Desperate Teenage Lovedolls and Lovedolls Superstar. Which served as partial inspiration for the film.

NWMS:  Did you donate any of those lunchboxes and/or other props?

Steven McDonald:  No, but I might still have my costume in a box somewhere.

Steven McDonald:  He was nice guy but totally mystified by Jeff and my sincere enthusiasm for the Partridge Family.  Evidently that had been a tough road for a young wannabe rocker turned bubblegum idol. I don’t think he felt he had been taken seriously… and was still wrestling with it a bit when we intersected with him. Hopefully Jeff and I helped him embrace that part of his legacy just a tiny bit, because that music inspired us just as much as The Who or Led Zeppelin did to be honest.

NWMS:  What Redd Kross influences would surprise a fan the most?

Steven McDonald:  Suspiria is classic. But my knowledge is limited. This is really probably a question for Jeff or Buzz Osborne.  But Jeff and I saw Beyond the Door when I was around 7 or 8 (on Jeff’s urging!). It left a lasting impression on both of us.

NWMS:  Where were you when you found out David Cassidy was dead?  What was his ultimate influence on what you do?

Steven McDonald:  I was home and saddened by the news.  Keith Partridge rode that fine line between rock god and nerdy stooge. That was his character on the show…but David brought a magical teenage command to the role of frontman. His breathy nasal vocal stylings are still pretty unparalleled for me.

NWMS:  What’s it been like touring with the Melvins?  How does Dale Crover stack up against your other drummers?

Steven McDonald:  Melvins are terrific to tour with. Their calm expertise is like a masterclass in underground rock group sustainability. They truly know what to sweat and what to not worry about.   I’ll forever be grateful to them for the interest they’ve taken in me as a player as well as embracing Redd Kross.

And Dale Crover is one groovy-ass motherfucker. He gets to flex his inner Ringo in Redd Kross, which is super fun to be a part of.

NWMS: What are your plans after the tour?

Steven McDonald:  Finishing a record with OFF!.  Japanese tour with the Melvins.  And a European tour with Redd Kross for spring 2020.