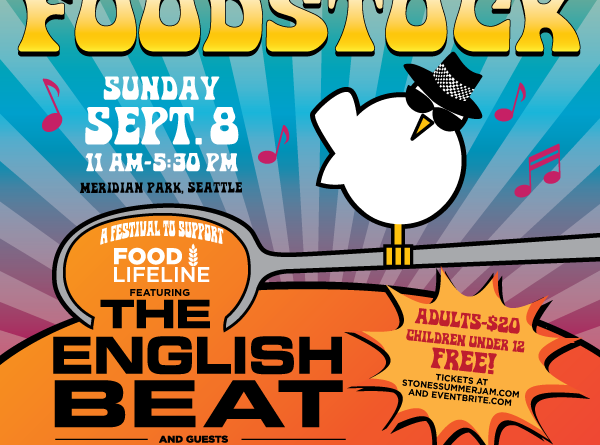 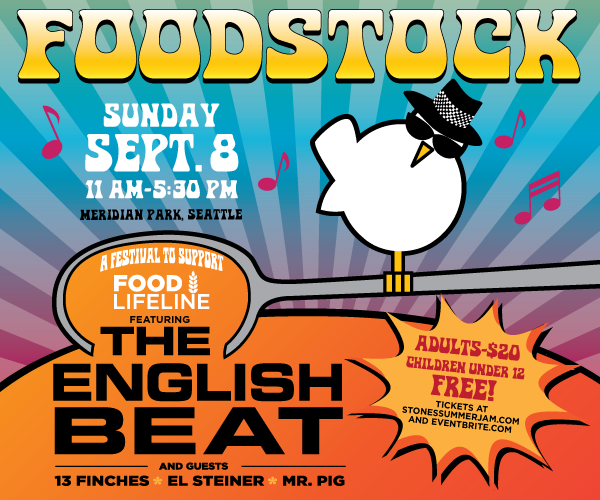 Foodstock 2019, a presentation of Stone’s Summer Jam (see below), aims to entertain folk for a good cause.  That’s Saturday, September 8th, 11:00 am to 5:30 pm, at Meridian Park, with The English Beat headlining the music. Mark Coleman from Food Lifeline, the relevant charity, was kind enough to take some questions.

NWMS:  Are you from around here?

Mark Coleman:  I was born in Ballard and raised in West Seattle and Renton.

NWMS:  What are your favorite and least-favorite things about Seattle life?

Mark Coleman:  I I love everything about Seattle, except for the weather. I have to escape somewhere sunny twice a year so I don’t lose my mind. I love the nightlife, the culture, and the coffee.

NWMS:  What is the Food Lifeline, and how did it get started?  How did you get involved in it?

Mark Coleman:  Food Lifeline is celebrating its 40th Anniversary this year. It was founded in 1979 by a group of state representatives and grocery store executives who wanted to create a system of donating surplus food from farmers, manufacturers, and grocery stores–to area food banks.

Today, Food Lifeline sources more than 60 million pounds of surplus food from these industries, and delivers that food to more than 300 food banks, shelters , and meal programs across Western Washington.

I was a former TV weatherman here in Seattle, and I left the industry to do more meaningful work in the non-profit sector. My family frequented food banks when I was growing up, so Food Lifeline felt like an amazing way to give back.

NWMS:  What position do you hold, and what are your responsibilities?

NWMS:  How did the idea for Foodstock come about?  Who had the idea first?

Mark Coleman: Shane Stone of Shane’s German Garage has been throwing a “Summer Jam” for several years. Shane started doing it as a way to give back to his customers and to his community. At first it was just two or three local bands and a lot of food, but they always raised money for Food Lifeline, which we thought was awesome.

Shane and I have become friends, and we decided to go “big” this year and see how large of a party we could throw. He’s a wonderful guy, and fun to work with.

My team came up with the “Foodstock” idea because it was the 50th anniversary of Woodstock this year. After a Google search, it turns out we weren’t the first, but we still love the concept.

NWMS:  What were the primary challenges in putting on Foodstock?

Mark Coleman: The toughest part about putting together an event like Foodstock is the little details. Ask me when it’s over how we did.

NWMS:  How did you go about securing the English Beat for Foodstock?  Had you been a fan of the band a long time?

Mark Coleman: I’ve been a huge fan of the band for many years. Two years ago I was wearing an English Beat shirt while shopping at the outlet mall in Tulalip, and this guy hollers at me from across the Banana Republic store, “Hey, nice shirt!”. He had the same shirt on.

I get to talking with him about the last show we saw, and it turns out he’s the band’s tour manager. I talked to him about Food Lifeline and what we do, then I told him–“Your band is going to play a show for us!” He said, “Sure thing, just let us know when”. So here we are two years later, and Dave and the band are headlining Foodstock.

NWMS:  Which other bands will play Foodstock, and how did you find them?

Mark Coleman: The opening band, Mr. Pig, are students at the School of Rock here in Seattle. 13 Finches are another local band that is popular on KEXP, and El Steiner is group of Seattle veterans who love to come out for fundraising events. They are all amazing.

NWMS:  What other kinds of entertainment are in store?  What can you tell me about the “food truck rodeo”?

Mark Coleman:  I We have four food trucks that will “rodeo” for the day, serving everything from Grilled Cheese sandwiches, to Chicago dogs, Vietnamese sandwiches to cotton candy.

NWMS:  Will there be another Foodstock?