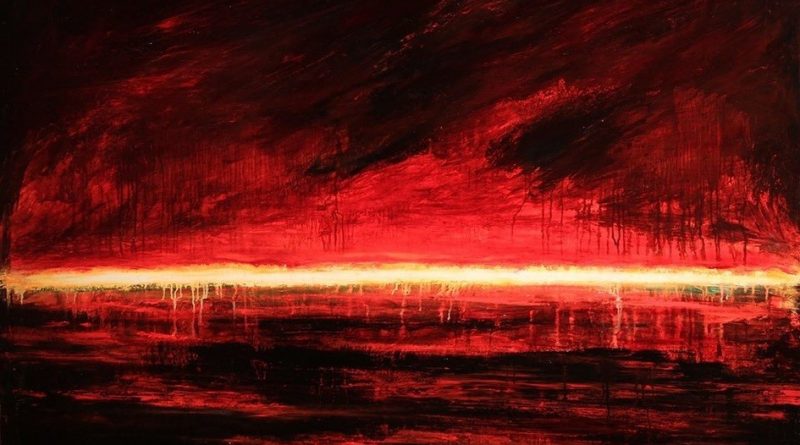 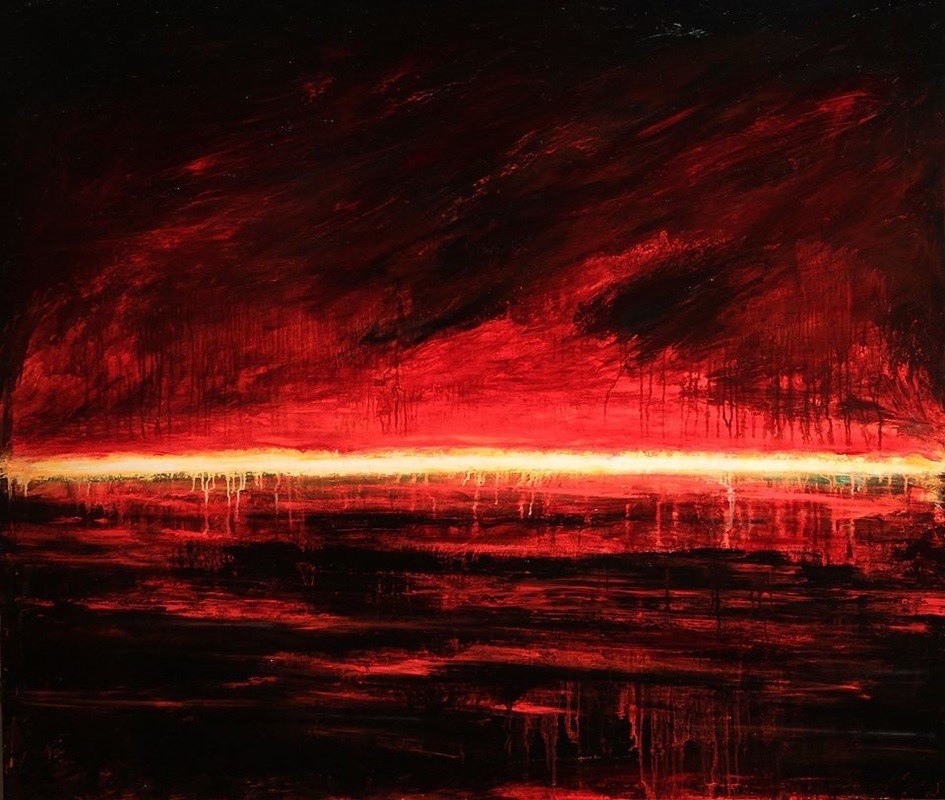 Imagine you’re a Karma to Burn roadie and you’re working on your 60s-ish muscle car around 10 p.m. on a Saturday night. The flood lamps are generating a lot of heat and your back is humming because of hours of contortions and odd angles. There’s grease everywhere but a grin on your face. In this scenario, “Risk vs. Reward” would be the CD you’re blasting away in your messy garage, pissing all of your neighbors off because, well, you just can’t find a way to listen to it quietly. My guess is that if the cops showed up, they’d understand.

Hundred Loud is comprised of Casey Berg (guitar/vocals), Tom Arnold (bass) and Nick Duben (drums). “Risk vs. Reward” is technically their second release (but really their first) and was recorded by Jack Endino at Soundhouse between late ’17 to early ’18.  This CD is definitely overdue. It’s surprising that a band who’s been around since 2014 has only demo songs available until now. It’s probably a testament to their love of playing a lot of shows. I interviewed Casey Berg about the upcoming release, asking for the musician’s perspective on each song. Here’s what he had to say…

Track 1 “The Red Fog”:  “You know you’re not attempting any substantial popularity when you open a CD with a 6:00+ instrumental full of weird changes. But it’s a perfect tone setter for us.  It’s also how we open a lot of shows, because we just spaz out for a while, and often fail to take the art of writing well-crafted songs with hooks into account.  I think the intro, and from about 4:00 on, paint a nice visual of an ominous fog penetrating a small, quiet town’s defenses, and silently over-taking the unknowing masses – only to dissipate and move on. Kind of a 50’s B-movie horror-flick style.”

Track 2 “Has Been”: “Like ‘Fog’ and “Monster”, performed on 7-string guitars.  I called this one ‘the circus song’ in the studio.  It was probably the one that evoked the most quotes from Jack (Endino) like ‘What the fuck was that?’ and ‘You are insane’.  The song, in one way, just doesn’t make any sense.  It’s nearly 7 minutes of changes, spazzing, and screaming.  It’s actually an amalgamation of two songs that were ‘scrapped for parts’ so to speak and found new life.  The riff around 5:45 was actually written some time in 2003 I believe, when my drummer (Nick Duben) and I both lived in Yakima.  We didn’t see each other for at least five years and didn’t start playing music together again for another five years. So that riff is – shit – 15 years old, and just now getting recorded.  Just proof that a good riff never dies. I inadvertently selected songs for the CD that all approach the same topic from different angles. . .”Is what you’re doing worth it?”  It is probably the loosest possible use of the term ‘concept album’ imaginable.”

Track 3 “Monster”: “This one’s been a live favorite for a couple years now. It attacks the same topic I just mentioned but in a more direct manner. Letting something overtake your whole decision making process. No nonsense, pedal-down, ugly-ass metal. I think this may have been Jack’s favorite.  It was probably the quickest song to write for us as a trio and the mellow part two-thirds in came first out of some spontaneous jam.”

Track 4 “S.M.B.”: “A much more comical approach to discussing bad decision making, spoken from a hang-over’s point of view.  I guess if any song on the CD had a hook, or a legitimate chorus, this would be it.  But it’s ALL about the sludge at the end of the song.  I remember having breakfast one morning with my pal Matt Wiseman after a pretty heavy night of drinking.  He was hanging his head over his plate of eggs & hashbrowns, unable to function in any capacity.  I asked him ‘How are your browns, Matt?’  To which he replied ‘Pretty sad, man.’  So, ‘Sad Man Browns’ was born.  And yes, that’s him laughing at the end, very inebriated, in some Cle Elum hotel room at 2 a.m. in the morning.  We like to close with this one.”

Track 5 “Risk Vs. Reward”: “Here’s the big enchilada. Too long to play on any radio station and I know the length immediately will make some folks view it as over-zealous or ostentatious.  But I don’t care. Sometimes the song has to develop. And I don’t really know how to write short songs anyway.  This tune was barely finished in time for us to record but it’s almost the whole reason FOR the recording.  The rest, to me, is almost just a lead-up.  Almost trivial in comparison. Like “Has Been”, there are a couple moments in this song that were sprung from different jams with friends, but never really saw the light of day.  My drummer Nick (Duben) heard a much shorter version of this around 2014 and really wanted to learn the song.  I ended up hating most of it – so again scrapped it, kept a couple parts, took my time, and worked on writing this until the pieces interlocked in the RIGHT way.  When Tom (Arnold), my bassist, heard it, he said ‘It’s too long.’ I wore him down though, and we’re all very proud of it. And I’m not a singer. I just do it because I have to.  Before I was even done writing the lyrics to this, I could hear Woodshed’s Hunter Venturo’s voice on it. He just elevates the song and legitimizes it. We practiced one Saturday and he killed it the following Monday. I guess you could say the song’s about saying goodbye. Choosing to say goodbye to someone toxic or a damaging relationship. It’s not about any one specific person but the ‘Risk’ of pushing through with a tough decision and the ‘Reward’ of the liberation that may come from it make the title a no-brainer. The line around 7 minutes in ‘…Liberation in the smoldering ruins’, and the last lines ‘With the flames of failure at my door comes a hopeful thought I’ve never known before’ (and the crackling flames at the very end), to me, assert that you can feel like you failed, you’ve given up on someone or a relationship, but you’re doing the right thing for yourself. And THAT is why I don’t usually spend too much time on lyrics. To me, the riff is more important.” 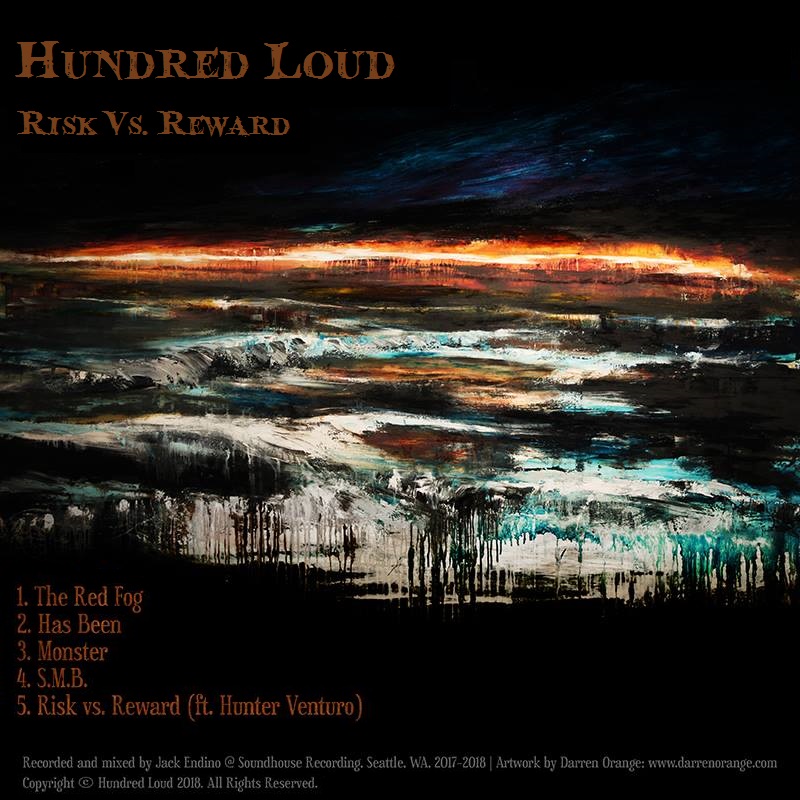 Risk vs. Reward is hard, heavy, head banging goodness. If you tried to classify it as stoner rock, you’d be surprised by its power and blend. It’s extreme rock, nu metal, industrial and sludge all rolled into one. There are a few interesting melody changes here and there but riffs are this EP’s strong suit. Portly at times and lead-footed in others, the extended instrumentals will cause your mind to wander. Don’t be surprised if you’re suddenly a couple of tracks further along than you thought. Lastly, pedal experimentation is higher than most but Hundred Loud always seems to make it back to the tried and true double-bass, in your face hard rock that’ll keep them in the Seattle circuit for a long, long time.

Kudos to Astorian (Oregon) Darren Orange for the cover art. The front image represents a horizon on fire, a test to see if you’ll venture into the unknown. “What’s the risk, what’s the reward?” you ask yourself. The art and CD title pair well with that age-old question.

You can check out Risk vs. Reward on Hundred Loud’s Bandcamp page and on most other digital platforms, such as iTunes, Spotify and Google Play when it’s officially released on March 24th. Subscribe to their Facebook page and don’t miss their CD release party with Devils Hunt Me Down, Jericho Hill and one band yet to be named at the High Dive. TopLeft TV will be covering this one which usually means it’s going to be a blowout. Chances are if you show up dressed as a mechanic, you’ll end up in the video!