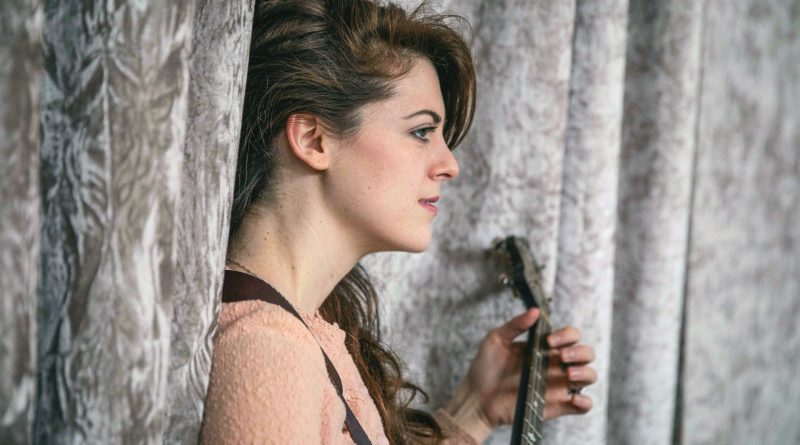 A conjuror of rich, deep, sometimes sinister banjo textures in which ageless haints might be hiding, Kelly Hunt brings her banjos and her songs, to the Conor Byrne Pub in Ballard on Wednesday, July 24th. She was kind enough to take a few questions.

NWMS:  This is apparently your first visit to Seattle. What impressions have you got of our fair city?

Kelly Hunt:  True, this is my first time touring through Seattle! But I have been to your fair city on a few occasions to visit family and do a bit of sightseeing, so I’m somewhat familiar with its charms.

I played an open mic once at Columbia City Theatre and remember being so impressed by the eclectic blend of genres represented. I was the only banjo player and folk musician there that night, but everyone received me very warmly. That experience gave me the impression that the Seattle music scene is wonderfully diverse and open-minded.

NWMS:  What banjo style or styles do you employ? Three-finger, clawhammer, other…?

Kelly Hunt:  In terms of traditional banjo styles, I do three-finger picking and clawhammer. And then I also came up with what I call a strum-and-drum picking pattern, which is a combination of strumming, tapping on the banjo head to create a drum beat, and picking out melody notes on either side of the strum.

That’s the beauty of being largely self-taught—you tend to innovate in ways that suit the song. The song tells you what it needs, and sometimes it needs something outside the box instrumentally to feel properly supported and complete.

NWMS:  You’re credited with playing tenor banjo and soprano banjo. How do those instruments differ from regular banjo?

Kelly Hunt:  I play tenor banjo and 5-string banjo. (I don’t actually play soprano banjo/ukulele, although I have been mistakenly credited with doing so). The tenor has 4 strings and a shorter scale length/neck, so it typically only has 17 or 19 frets. I tune my tenors differently from a traditional tenor tuning, so they have a meatier sound. The 5-string banjo typically has a longer neck with 22 frets and projects a bit better.  Of course there is a wide variety of tones and characteristics amongst tenors and 5-strings. Even my two tenors (twin models) sound radically different.

Both of my tenor banjos are from the 1920s (the heyday of tenor banjo). One has the original calfskin head, so it has a very sweet, warm, muted sound, whereas my other tenor essentially has a snare drum head, so it’s much louder and crisper. Both of the tenors have resonators (a solid wood back), so the vibrations are trapped within the instrument, and it resonates in a particular way as a result. My 5-string is a traditional old-time open-back banjo (no resonator) and has more volume and clarity than the tenors and is better suited to clawhammer.

NWMS:  Who and what influences you most in terms of songwriting? Are you deeply steeped in murder ballads?

Kelly Hunt:  My musical influences are pretty eclectic. I grew up listening to a lot of classical music, especially the Romantic composers. So there are some orchestral elements to my songs for sure. But I also listened to everything from Johnny Cash to Mississippi John Hurt to Joni Mitchell to Hazel Dickens to Doc Watson to Norah Jones to Regina Spektor. Gillian Welch has probably been the greatest influence on my songwriting though. There is a little bit of them all in my writing: a little country, blues, folk, old-time, and indie. Lately, I’ve been listening to a lot of contemporary Americana/Folk singer-songwriters like Courtney Marie Andrews, Mandolin Orange, Hayes Carll, Ray LaMontagne, Gregory Alan Isakov.

I did get really interested in murder ballads when I first discovered Appalachian music. I was enamoured with the storytelling tradition of these songs, especially the ones that have been passed down for centuries from country to country and re-interpreted hundreds of times. I love that.

NWMS:  You’ve been praised by the great critics such as Greil Marcus. What’s it like to hear such things?

Kelly Hunt:  It is pretty surreal to be noticed at all by the likes of Greil Marcus. “Disbelief” is the word that comes to mind. But it is truly wonderful to see this album—which has been such a grassroots effort and labor of love—bear fruit. It’s a quirky collection of songs, which I felt self-conscious about in the beginning. But the warm welcome it has received so far has certainly exceeded my expectations and put wind in my sails going forward.

NWMS:  Will you be performing alone, with a band, or some of both?

Kelly Hunt:  I am currently on tour in support for my debut album Even the Sparrow, which was released in May. I am on the road with Staś Heaney, who accompanies me live on violin but who also co-produced the album with me and played multiple instruments on it. He’s a big part of this operation. I write the songs and then we arrange most of them together for the studio and live performance.

NWMS:  What’s in the future for you after this tour?

Kelly Hunt:  Staś and I will be touring in support of Even the Sparrow for the remainder of 2019. We are headed from Seattle to British Columbia to play a couple folk festivals out there and then will take a week or so to route back to Kansas City with several shows and radio appearances along the way. Then we will be striking out again in September for another month-long run of shows throughout the Northeast.

That will be the trend this year—touring aggressively and starting work on my sophomore album for release in early 2020. I am having a lot of fun taking this show on the road,  traveling and learning how to navigate this industry. I am just hoping to keep the momentum going and get as far as I possibly can with what we have made so far while still finding time to create and record.