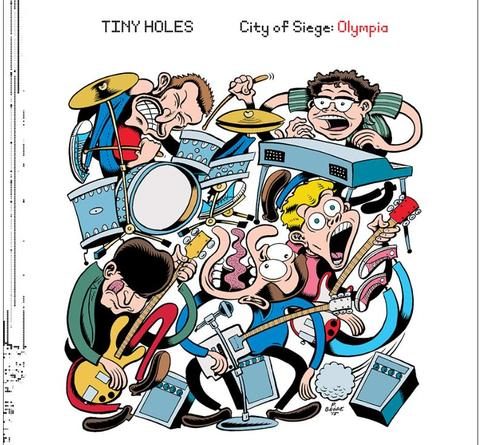 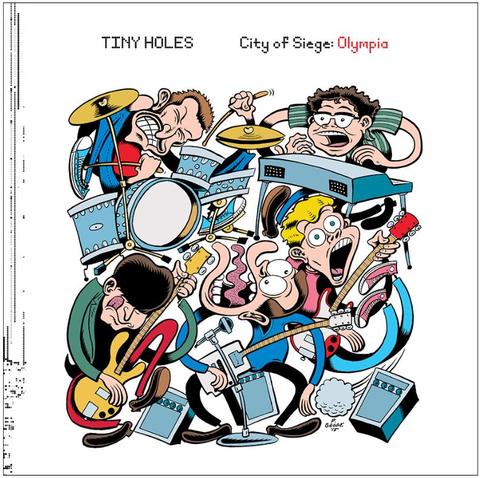 City of Siege: Olympia is a record steeped in the music scene of Pacific Northwest. First, the album was recorded one spring night long, long ago, on May 17, 1981, at Popeye’s in Olympia. Then there’s the Jack-of-all-trades who brought his skills to mixing and mastering the Tiny Holes recording after it had been salvaged from whatever storage place it’s been resting in since then, that maestro of the recording console, Jack Endino. Then there’s the cover art, a caricature of the band in the instantly recognizable style of Peter Bagge. It’s on K Records — naturally. Finally, there’s the band itself, fronted by none other than Mr. Sub Pop Records, aka Bruce Pavitt.

Yes, before he was an international music mogul, Pavitt himself tread the boards as a musician while attending Evergreen State College, giving him some insight into what a performer experiences before he moved on to working behind the scenes (the other most notable player is Steve Fisk on guitar, keyboards, and drums; the group’s rounded out by Paul Tison on bass, Steve Peters on guitar and alto sax, and Phillip Hertz on keyboards and drums, with Pavitt on vocals, guitar on one song, vibraslap on another). Of course, it was obligatory for any young person living in Olympia to be in a band (or two), so it’s not that surprising that Pavitt took up the challenge, describing his brief performing career as a “creative project that helped pass the time in a small town.”

The brief liner notes describe the band as “noisy punk/funk.” It’s the kind of post-punk/new wave critics invariably describe as “spiky.” But first you have to get past the irritating opening track, “Russian Satellites,” which has random, clattering noises broken up by Pavitt’s deep voiced moaning. It’s introduced as a “new song,” and it sounds as if it hasn’t been fully worked out yet. But then it’s straight into the far more engaging “I’m in a Room,” a rapid-fire number about the claustrophobia of elevators (well, that’s one interpretation).

Pavitt cites Pere Ubu, The Pop Group, and composer Steve Reich as influences for Tiny Holes. The best songs lay down a solid groove (and in common with a lot of indie stuff of the era you can count on a very prominent bassline), leaving room for some improv on the top. The nervy, edgy drive of the music gives the songs an ominous undercurrent, even when Pavitt is singing such anodyne lyrics as “A girl/and her pony/on a farm/in the country” in “Pounding Hooves”; of course it’s going to get more disturbing later, when his voice starts rising in an angry yelp. These are songs that keep you from letting your guard down; you can’t be sure what’s going to happen next. The caterwauling of the title track (basically just the title and various city names called over various noises) implodes into the laid back bopping of “I Love You,” which then carries over into the fractured, jagged rhythms of “Walking on Air.”

Even without its pedigree, this would be an entertaining record. As it is, it stands as a terrifically fun slice of history, a look back at a group of young men who hopped on the DIY train and rode it to places they never imagined they’d go.