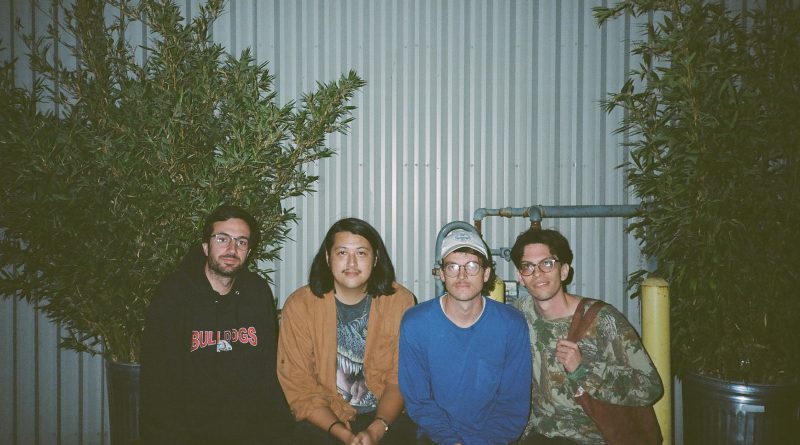 Seattle quartet Versing got started down south—down Tacoma way, that is, where they all spun licorice pizza for KUPS-FM. The sound mixes pop, punk, noise, and letting the feedback out in the grand tradition of the Velvet Underground and later Feelies.

NWMS:  Were all four of you on the air at KUPS?  Which shifts did you have, and what did you call your shows?

Daniel Salas:  We all had shows on the station. Mine was called “Eighth Grade Pizza Party,” Graham’s punk show was called “A+++,” and Kirby and Max’s shows didn’t have names because they weren’t as cool as Graham and me. I usually scheduled my show for Friday afternoons, right after all my classes were done. It got the weekends off to a good start.

NWMS:  How did the four of you meet in and around KUPS?

Daniel Salas:  I became friends with Kirby because my radio station mentor introduced me to his other friend/roommate Ben. Ben had seen a picture of me playing drums and asked me to come jam with him and Kirby, and we pretty much instantly formed a band. Max and I had some classes together as well as several mutual friends.

When I became a music director for the station he was one of my DJs, as was Graham. I ended up hiring Graham as my assistant the year after I met him. I’ve been bossing him around for quite a while I guess.

NWMS:  You played drums in a stoner metal band. Which one? How did stoner metal drums influence his guitar and singing in Versing?

Daniel Salas:  The band was called Sun Eater. To be honest, I don’t think it had much of an influence on Versing. It maybe opened me up to playing heavier music than I had previously been into.

But I started Versing because I wanted to do something that wasn’t stoner metal, a genre I had no real affinity for before forming the band with Kirby and Ben. I liked Sleep, Boris, and Black Sabbath, but that’s about the extent of my stoner metal knowledge, even after being in Sun Eater.

Daniel Salas:  Apartment living makes writing loud songs pretty difficult, but it also makes me focus more on making the chords and riffs fit together really well before plugging in and muddling it all up with distortion and effects. The skeleton has to be good if I’m just writing on an unplugged electric guitar.

But once everything gets brought together things change pretty rapidly. The songs take off in unforeseen directions when other musicians start playing.

NWMS:  You use a lot of feedback. Do you ever feel that the feedback has grown sentient and is taking control?

Daniel Salas:  Feedback is monitoring this conversation. All praise to the sentient, benevolent feedback!

NWMS:  You titled a previous album Nirvana. How long did you keep chuckling after you picked that title out? Were the critics kind?

Daniel Salas:  I am still chuckling. Some critics got the joke. The critics who didn’t can go hang.

NWMS:  How does Tacoma compare and contrast with Seattle in terms of music, culture, and everything else?

Daniel Salas:  It’s certainly much cheaper than Seattle, though that’s been changing a bit over the past few years. It’s also much more relaxed and doesn’t have as much of a chip on its shoulder. Plus there’s no Amazon assholes to avoid. The bars are much better in Tacoma, too. But Seattle has better music venues.

NWMS:  Any favorite record stores on the I-5 corridor? If so, which, and why?

Daniel Salas:  I am too poor to buy records. But I do enjoy visiting Wall of Sound whenever I’m able.

NWMS:  What are your favorite places to play in Seattle and Tacoma, and why?

Daniel Salas:  Kame Hou$e is cool if a little over the top. The Black Lodge is a classic. But nothing really beats a basement full of college kids in Tacoma.

NWMS:  What’s in the future for the band? Live dates? Tour?

Daniel Salas:  We’ll be hitting the road with Froth for a pretty extensive US/Canada tour this June and July. Catch us in a city near you!

(Get more information about Versing and purchase the new album at the Hardly Art website HERE.)