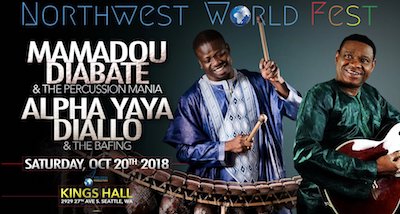 In addition to the musical ensembles, Northwest World Fest will also include visual arts, African clothes and jewelry vendors, and traditional Senegalese cuisine–fish, jollof (rice), and ginger beer. Presented by Yeleen Production, a West African-owned promotion company in Seattle, and celebrating multiple facets of contemporary African culture, Northwest World Fest aims to bring the African community living in Seattle together and to connect these communities to the larger city and region. “The Northwest World Fest is an opportunity to disseminate the values and beauty of African and world music and culture, and to bring together the community regardless of gender or national origin,” promoter Abdul Ndiaye explains. “We want to celebrate, music, visual arts, food, and education, by presenting some of the best traditional instrumentalists in the world. We want to bring diversity and cultural enrichment to Seattle. ‘Yeleen’ means lightning in the Bambara language, and we want to bring that kind of power to Seattle’s music scene.”

About Mamadou DiabeteMamadou Diabete, one of Burkina Faso’s foremost balafon players, will be playing alongside his band, The Percussion Mania. The balafon, much like the xylophone, is a wooden percussion instrument and a cornerstone in the music of West Africa. Composed of 16-27 keys, the banofone has an airy, tropical quality to its sound. As a child, Mamadou was taught by balafon legends such as his father, Peneque Diabete, and Dauouda Diabete, a “grandmaster” of balafon in the Tusia region. Running away from home at just eleven years old, Mamadou expanded his musical knowledge to other instruments such as the hunter’s harp (the kamele n’goni), base drum, and the djembe, a rope-skinned goblet drum. Since then, Mamadou has lived in Austria and played at various international festivals. His biggest goal since childhood has always been to help impoverished children in Burkina Faso receive an education, and in 2010 opened up a free elementary school in Bobo Dioulasso.

About Alpha Yaya DialloLongtime Vancouver resident, and originally from Guinea, Alpha Yaya Diallo will be joined by his band, The Bafing (including Seattle balafon virtuoso Naby Camara from Guinea). Discovered by Peter Gabriel in the ‘80s, Alpha joined Real World Records while touring with the group Fatala. Constantly moving around with his family as child, Alpha and experienced many cultures of Guinea, such as the Malenke, Sousou, and his own Foulani people. While in Senegal, he picked up the popular mbalax rhythm, as well as Cape Verde and Caribbean influences. In 2007, Alpha represented North America with his inclusion on a United Nations compilation benefiting those with HIV/AIDS, hunger, and debt in North Africa.

About Yeleen ProductionFounded in 2010 by Abdul, Yeleen Production has two simple goals: to produce live world music events for under-served and minority communities at low cost in the Greater Seattle Area, and to serve as a platform to address specific human needs in West Africa as learned from its music and culture. As a non-profit organization created by a young promoter from Burkina-Faso, Yeleen Production exists to strengthen the ties within Seattle’s African community. http://www.yeleenproduction.org/