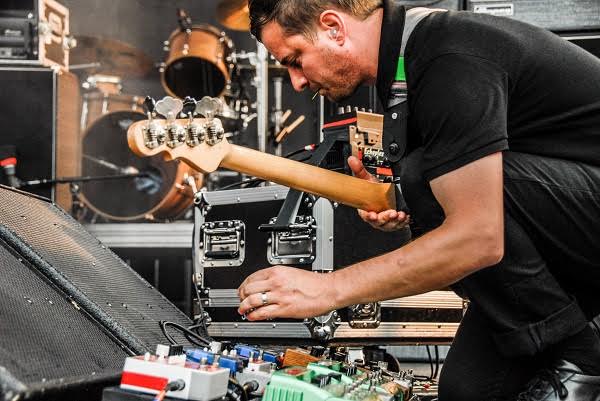 I hear a lot of talk from people that say there is no longer any great or even good music being made in today’s day and age. Let me be clear that my belief is that these people are in the (wrong) minority, and rarely have any of them listened to enough new music to make such a damning and bold statement. Sure, there’s plenty of mediocre music out there, but there always has been. Similarly, there is just as much great music out there as there always has been, and if you aren’t finding it, then perhaps you need to dig a little deeper.

Last year, as the editor of NorthWest Music Scene, I didn’t do my own top-ten list, although a few of our writers made their own personal choices. But if I would have done one my clear choice would have been The Mothership‘s Bright Side of Dim, which in my opinion was one of the best albums to come out of the northwest in the last two decades. I mention that because it is exceptional music and there’s a lot more like that if you dig deep enough.

This year I did decide to put together a list of my 10 favorite Pacific Northwest-released albums of 2015, and I certainly had a wealth of fantastic stuff to pick from. Everything from the brilliantly gloomy, doomy and sludgy sounds eminating from Tad Doyle all the way to the bright and cheery brit pop-come-Tom Petty sounds that were created by long-time Seattle music fixture Danny Newcomb and his Sugarmakers. 2015 also saw the resurgence of a musician that left a massive mark (although he won’t admit it) on the world of grunge and thereby influencing scores of musicians all over the world. That would be the ex-drummer of Green River, Alex Vincent, who now is angrily torturing the skins for Ex’s With Benefits.

As far as my list goes, it might have full albums and might have some EP’s or compilations. My list, my rules. This year did, however, cause a great deal of back and forth thought over who would be number one and who be number two. Actually, I expected myself to pick co-winners, but after a conversation with a Seattle musician whose opinion I respect very much, he “sort-of” insisted I need to not take the easy way out and that I have to pick a winner. Ultimately, he was right, and while I did pick a winner, it was as close to a toss up as it could possibly be.

In his own list, our reviews editor selected Lemolo‘s 2015 release Red Right Return as his favorite album of this year, and while it apparently didn’t move me quite as much as it did him, it’s still quite an amazing album and deservedly gets a spot on my list. In a somewhat minimalist approach to a sort of indie dream pop sound, the band relies heavily on the incredible voice of Meagan Grandall to create an addictive soundscape. It’s fantastic and a great way to round out this list of fantastic albums that came out this year.

From the twisted mind of Tacoma’s Cody Foster came a project that I totally loved, mostly because of the absolute creativity and uniqueness to it. Foster’s idea was to have his own band, Cody Foster’s Army, record a short and blazing instrumental punk rock song and then send it out to the world and let other musicians write their own lyrics, however they interpreted the tone of the instrumental. What resulted was 36 completely different versions of the same song, and while it’s not going to win a Grammy for most over-produced, it is an absolute blast to listen to.

This is an album I found a little bit later in the year, but after spinning it several times, I knew I was going to have to place it in this list. At times, the album reminded me of bands like The Cult, and while they aren’t exactly re-inventing the wheel with the material here, what they are doing is writing great songs that fit the musicianship perfectly. Building Mountains is an album that will grow on you, and while may take a few spins to “get it,” if you are searching for a great Seattle rock band to check out, I’d put this album on a must-listen list. It’s worth the investment.

Stereo Embers
Code of The Sound

This is another band from Seattle that completely breaks the myth of what some people outside of the northwest think bands from Seattle are “supposed” to sound like. Stereo Embers‘ 5-song EP, Code of the Sound, was put out on Stone Gossard’s label Litho Studio, and is well deserving of all the attention it’s getting. Code of the Sound delivers a delicious blend of indie-meets-retro rock with enough bite to get people up and out of their seats. Highly recommended.

In the past, when we’ve posted something about Randy Bachman (BTO, The Guess Who), some jackwad will hit the caps lock button informing us that Randy is not from the northwest. There’s almost no greater satisfaction than educating people on that which they don’t know. (Especially on the Internet, right?) Not only was the most popular BTO stuff recorded in Seattle, but Randy and his family lived for many years in a sleepy little dairy town called Lynden (I’d know, because I lived a few doors down from them). But now that we’ve qualified him let’s talk about his latest album called Heavy Blues.

It has the ferocious guitar you’d expect from this legend, but what makes the album even more interesting is that, although he and Fred Turner still have a great thing going, he hired a few younger female musicians to play drums and play bass. And did they ever. Dale Anne Brendon absolutely crushed it on the drums and Anna Ruddick contributed some thick-as-hell bass chops on the album. Also of note is the laundry list of guest spots. Joe Bonamassa, Peter Frampton, Scott Holiday, Neil Young and many more. It’s a great album and very much deserves to be on this list.

The Sonics
This Is The Sonics

The Sonics make this list because, well they are The Sonics, and really deserve everything great that comes their way. This is no charity case, though, and make no mistake, these guys (who have influenced legions and entire genres) are not ready to stop anytime soon. 2015 saw them sell out venues all over the world while touring behind the latest album, and for good reason, it is garage-rock at its absolute finest.

This is their first album of new music since the year of the very first Super Bowl, 1967, but you’d have to read the liner notes to know that because you can’t tell by listening. They also get bonus points for a Seattle concert earlier in 2015, which once again found them throwing down a heavy dose of the kind of music that largely put the northwest on the musical map.

This was an album a long time in the making but certainly worth the wait. The legendary Tad Doyle(of TAD and Hog Molly fame) turns it up to 11 on this self-titled bad boy, but with the guitar tone he gets, it only feels like it’s cranked to nine-and-a-half or ten. And when I say “feel it,” I mean that quite literally. Brothers of the Sonic Cloth is doom, gloom and despair mixed with enough blisteringly beautiful guitar work by Doyle to somehow make you feel happy and uplifted after listening.

This album almost criminally flew under a lot of radar screens. On SuperSquare, mad scientist Amos Miller mixes a toxic potion of nearly every genre under the sun. The first time through the 2015 release from Miller, it can leave the listener a bit perplexed, in the sense that it’s hard to imagine combining this many styles of music and making it work, and better yet, making it work this well.

Released in April 2015, he wisely puts the extreme talents of the musicians of Love City Love to good use while unleashing this vivid soundscape on the world.  Love City Love, the acclaimed ensemble Miller curated, is made up of players who are at the core of Seattle’s cultural scene with members in some of Seattle’s most solid bands with sensibilities ranging from hip-hop to jazz and beyond.

As he bends genres and invents those yet to be named, Miller uses 4 part harmonies, heavy bass, trap beats, Tibetan bowl playing, spoken word and 8 bit synthesizer programming to create a space of reflection, discord, and healing. If your ears are like mine and like to experience all different types of music, this quite possible could be the album  for you.

It really couldn’t be any closer of a race. This is an album that contains absolutely no weak tracks, and from my first listen I knew it was special. It’s full of catchy tunes, and even though the album has some pretty legendary Seattle musicians on it like Rick Friel, it helps to break the myth of what “Seattle” is supposed to sound like.

To me, it sounds like an album that could have just as easily been released by a Brit-pop band from the 90s, with maybe a touch of southern twang lightly sprinkled on top. I made the comment once that if The Beatles were still together, this is what they’d sound like. Newcomb displays some very tasty guitar work throughout the album, and Friel’s bass work is some of the best you’ll find on any album, anywhere.

Tossing in Mike McCready (Pearl Jam) and his incredible guitar work on “Sundays” added to the album, but this music is brilliant enough to stand on its own without even mentioning him, but we love Mike and his mastery of the guitar, so why not?  It really is a fantastic album and truthfully if I wouldn’t have been almost forced to pick a winner this would have been tied with…

I reviewed this in January, and in my review I proclaimed it might just be the Seattle album of the year. Well here we are at the end of the year and although it really can’t be any closer, I made the agonizing decision to pick this over Masterwish. If I had to come up with a reason why, the deciding factor was probably the lyrical content moved me a little more.

While the album is full of catchy, just-poppy-enough punk rock that would have been an instant hit two-and-a-half decades ago, the message behind the album is what sealed the deal. It is a basically a 2015 protest album, brilliantly written by drummer Alex Vincent, and his songs were interpreted on a near spiritual level by Dmitra Smith, a Seattle native who now calls the Bay Area home. Her vocals cut like a knife as she and her well accomplished bandmates (Dave Place on bass, Pascal Faivre on guitar and Vincent) bring awareness to homelessness, racism, women’s rights and general fuckery by the establishment. Totally recommend getting this album as soon as you are done reading.

There you have it. Let me add right now that I hate, hate, hate year-end lists like this, just because of how much narrowing down is required to keep it at a sturdy 10 picks. There were several albums that were very close to making it into this list, including the latest records from Skies Below, The Gods Themselves. Chimurenga Renaissance, The Fame Riot, Ever So Android and probably countless others.

All the same, Happy New Year and to all the bands, keep doing what you do!