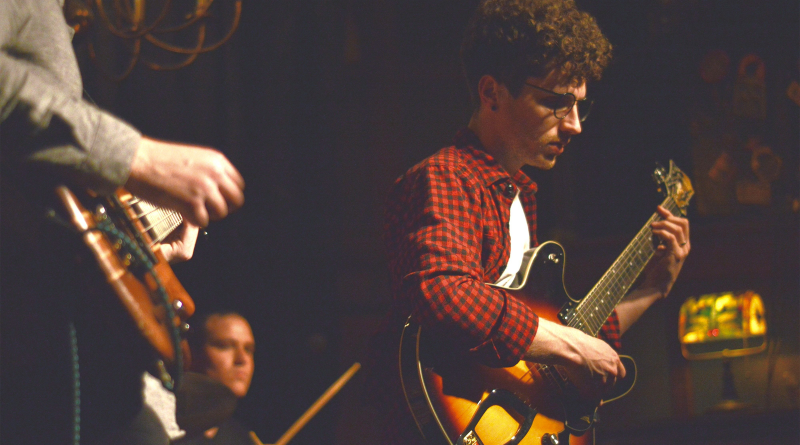 NWMS: Where in New Jersey are you originally from, and what are your most crucial memories of growing up, musical and non-?

Jay Louis: I was born and raised in central New Jersey about 20 minutes outside of Trenton. People like to claim that central Jersey doesn’t exist, but they’re wrong. North Jersey is heavily influenced by New York City and south Jersey by Philly. I grew up in the middle of all that where people argue over things like pork roll vs Taylor Ham or subs vs hoagies. It’s pork roll, by the way. No specific memories come to mind. I mostly replay my childhood as a generic 90s montage in suburbia. I spent a lot of time playing music in friends’ basements, skateboarding, and hanging out in the 7-Eleven parking lot near my house.

NWMS: Whose music made you want to make music?

Jay Louis: I was heavily influenced by my older brother being in high school bands in the mid-90s. I would steal his guitar when he wasn’t home and that’s how I taught myself how to play.

NWMS: What kinds of bands and bandmates did you have back East?

Jay Louis: I played in a few bands back in New Jersey. The best part was getting to play with my best friends and people I learned to play music with in the first place. The music was similar to what I make now, although I think it was a little more contrived and over-produced. I put a lot of expectations on myself as a young musician.

NWMS: Is playing NYC really as insane as it’s made out to be?

Jay Louis: Twenty dollars in tolls, two hours in traffic, having no clue who (or how many people) would show up. It was wild. We always had a blast, though.

NWMS: What lead you to seek out Seattle and when did you arrive here?

Jay Louis: My wife and I sold the majority of our belongings and drove out to Seattle in 2015. We were both born and raised in NJ and were ready for a change. We knew we wanted to move west, but basically threw a dart at a map and it landed on Seattle. Our first time ever visiting was to hunt for an apartment and we have never looked back. Thank you for everything, Seattle.

NWMS: How does Seattle compare and contrast with where you came from, in terms of music, culture, nightlife, art, and anything else?

Jay Louis: It’s different in a lot of ways. The pizza mainly. It’s not the same. I’ve also learned to slow down and to not shut off my surroundings. Like when a barista asks “got anything fun going on this weekend?” I no longer think “why are you asking me this?” Maybe Seattle has made me nicer? Or maybe I’m just happier here. Seattle has an impressively supportive local music scene. I actually remember reading that somewhere before moving here and it’s true. In my experience, playing music back east felt much more competitive. In Seattle, a lot of the people who come to our shows are our friends from other local bands. It’s one of my absolute favorite things about this city.

NWMS: Who are the other members of La Fille and how did you find them?

Jay Louis: I started looking to join a band right after moving to Seattle and stumbled upon a Craigslist post about starting a punk band. Long story short, that’s how I met Joe [Oakes], our drummer. It didn’t take long before we decided to pursue La Fille instead. He helped with many of the performances on the record. After recording, we put together the live band, starting with Tom [Moskal] on bass, who was a friend and old co-worker of mine. We completed the lineup with Jackson [Fahey] on lead guitar. He and Joe went to school together at Cornish.

NWMS: How did you decide on the sound for the new band?

Jay Louis: It wasn’t an active decision. I just try to follow what feels best for me as a songwriter and hope that leads me down the right path. It’s a messy process.

NWMS: Where did you record the new album, and who manned the board? Any interesting stories from recording?

Jay Louis: Michael Benjamin Lerner of Telekinesis recorded our album in his studio. I’ve been a long time fan of Telekinesis, so it was a trip getting to make the record with him. He recorded and engineered the whole thing, plus helped immensely with the production. Fun fact: Michael is low-key a top-notch, world class barista. We started every day with a ceremonial espresso. I think I still have some lingering heart palpitations.

NWMS: Where are your favorite places to play in Seattle, and why?

Jay Louis: Hard question. We love playing all the venues in Seattle. But if we had to choose, I think our favorites would be all the spots in Ballard, specifically the Sunset Tavern & Conor Byrne. They both have that neighborhood vibe that makes it fun for us. The people who run the shows are always so sweet and the environment is super laid-back.

NWMS: What are your plans now that the album’s finished? Touring?

Jay Louis: Our next steps are figuring out how the hell to tour. Any ideas? Let us know. Oh yeah, and we’ve already begun working on new material.

Get more info about the record release show HERE.