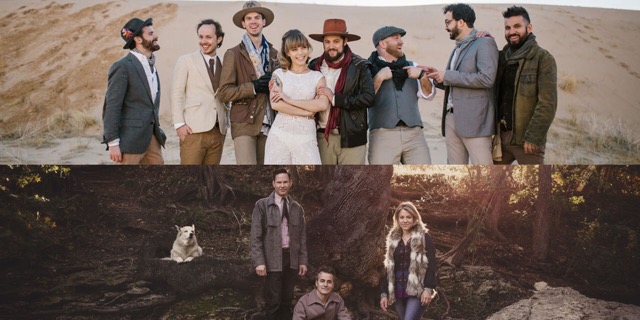 The Dustbowl Revival is an Americana and Soul band that blends sounds from funk to folk with eight full-time members. They mash the sounds of New Orleans funk, bluegrass, soul, pre-war blues, and roots music, into a genre-hopping, time-bending dance party that coaxes new fire out of familiar coal. The band was founded in 2008 in the bohemian enclave of Venice Beach, California.

Dustbowl just recorded their fourth studio album with Grammy Award winning producer (Old Crow Medicine Show, Dropkick Murphy’s) and Flogging Molly founding member Ted Hutt, to come out on Signature Sounds this summer. While the band launched with an old-time style and deeper bluegrass roots (a fateful Craigslist ad got it all started), they recently departed toward a more modern soul sound, still with their mixture of New Orleans swing, Americana, a little blues, and roots-rock. Over the last five years Dustbowl has become known for their free-flowing and joyous live shows, combining their funk rhythm and brass section with a fast-picking string band. Their new self-titled album dropped June 16, 2017!

Since its beginnings in the late 1990s, the Hot Club of Cowtown’s star has continued to rise as its reputation for jaw-dropping virtuosity and unforgettable live shows has become the band’s global brand. Lauded for its “down-home melodies and exuberant improvisation” (The Times, London), the Hot Club has always woven a combination of seemingly disparate styles together to its own magical effect, setting up camp “at that crossroads where country meets jazz and chases the blues away” (The Independent), remaining “conscious always that above all else, the music is for dancing and an old-fashioned good time” (New York Times). The band’s musical alchemy has been described as “another breathless journey in the Texas tardis” (The Times, London), while American Songwriter observed that “the excellent three players of this band could be doing anything but have chosen to honor the greats of jazz and swing with their sound.” The Belfast Telegraph calls the Hot Club of Cowtown “a pretty much perfect country trio at the very top of their game,” and the New York Times, in a live review the trio as armed with “an arsenal full of technique and joy.”

Along with the Hot Club’s dedicated cult following worldwide — they have toured for the U.S. State Department as musical ambassadors to Azerbaijan, Armenia, the Republic of Georgia and the Sultanate of Oman — certain titans of the industry have also taken notice. Bob Dylan, with whom the band toured and with whom James has toured and recorded, is a continuing inspiration. The Hot Club has opened several shows for Willie Nelson, toured with Nelson and Dylan during a summer-long stadium tour, and recently opened seven nights of Roxy Music’s sold-out “For Your Pleasure” U.K. stadium tour.

Get more information about this show HERE.