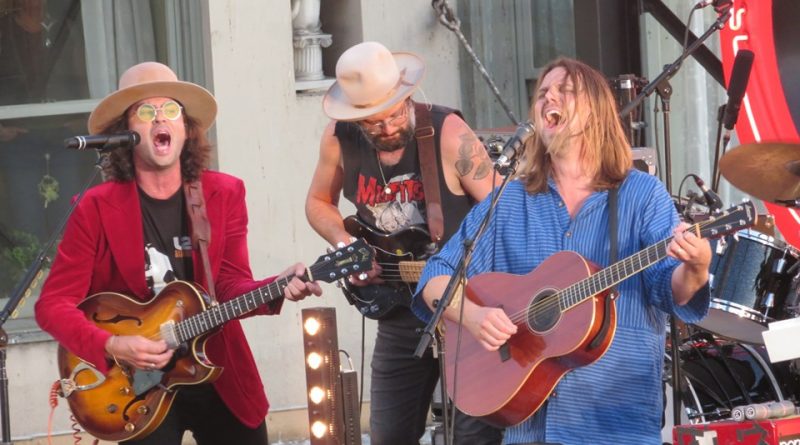 The Northwest hasn’t seen hide nor hair of Seattle indie folk act The Head and the Heart since the release of their album Signs of Light in 2016. But what a way to make a return appearance — with a free show, at one of Seattle’s most iconic locations, on one of those glorious summer evenings that makes living in the Pacific Northwest worthwhile.

Fans began arriving downtown early, checking out a pop-up shop that opened in front of the Showbox, carrying specially designed H&H merch (proceeds benefiting local organizations; t-shirts and posters commemorating the event are still available on the band’s website). At 5 pm, the intersection of Pike Place and 1st Avenue was closed to car traffic, and people began congregating on the street in front of the neon Public Market Center sign and clock on the market’s roof, where the band’s gear was enticingly set up. And for the next two hours, people continued arriving, eventually packing the street, creeping up Pike Street to 2nd Avenue, and down Pike Place nearly to Pine Street. When the band finally emerged, you could hear the cheering blocks away.

“We’re the Head and Heart in Seattle, Washington, it’s beautiful to be back in your city, our city,” said guitarist Jonathan Russell, before the band opened with the coolly contemplative “Down in the Valley,” from the band’s self-titled debut album (self-released in 2009, re-released by Sub Pop in 2010). “What is this?” violinist/vocalist Charity Rose Thielen exclaimed afterwards, looking out at the crowd with amazement. “What is happening? This remains one for the fucking books!” It was “pretty surreal” for the band to find themselves playing at the Market, she continued, remembering how they used to busk for tips in the street below. “If you don’t believe that dreams come true…this is a fucking dream. And we’re lucky to be here,” Thielen concluded.

The band played an abbreviated, 45 minute set, so as not to irritate the neighbors too much. A third of the set drew on songs from the band’s latest album, Living Mirage, starting with the second song the band played, “Missed Connection,” which opens with a nice spate of harmonizing and continued with a steady groove that got the crowd moving, as did the sing-along chorus. “Honeybee” was a dreamy number, with Russell and Thielen trading lead vocals. “See You Through My Eyes” was a slice of heartier fare; the band’s new songs are more robust, in comparison to their earlier, stripped down songs.

But the band dug deep into their catalogue as well, with a song like “Lost in My Mind” (which Russell noted was one of the first songs he wrote in Seattle), offering a clear demonstration of what got audiences hooked on the band in the first place. It’s the kind of songs that starts out quietly, then sweeps you up into its embrace. You never knew folk music could be so energizing.

“Shake” proved to be the most invigorating number, which had the band practically levitating as they bounced along in time with drummer Tyler Williams’ bass drum. Then it was time for the traditional closer, “Rivers and Roads,” something of a cool down after the rhythmic stomping of “Shake.” A nice send off, on a beautiful night.

Setlist: “Down in the Valley,” “Missed Connection,” “All We Ever Knew,” “Another Story,” “Lost in My Mind,” “Honeybee,” “See You Through My Eyes,” “Sounds Like Hallelujah,” “Shake,” “Rivers and Roads.”

At the moment, the show is still available for streaming on Facebook here.